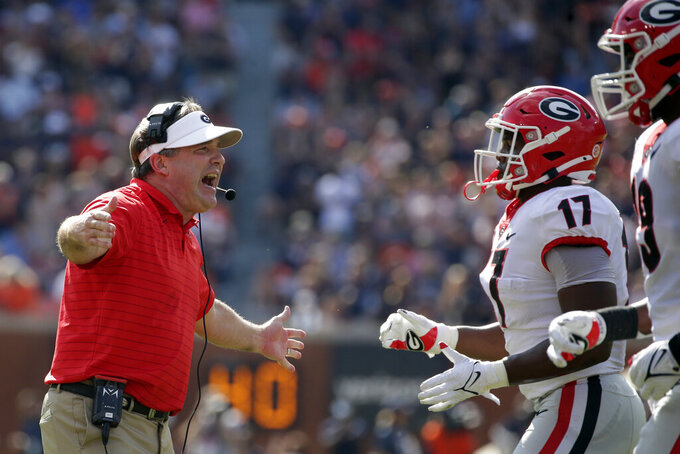 Georgia head coach Kirby Smart celebrates after a defensive stop during the first half of an NCAA college football game against Auburn, Saturday, Oct. 9, 2021, in Auburn, Ala. (AP Photo/Butch Dill)

Line: Georgia by 21 1/2, according to FanDuel Sportsbook.

The winner gains control of the SEC East race and is likely headed for a spot in the league championship game. Georgia's defense, which has allowed just two touchdowns all season, will look to turn in another stifling performance in its bid to go down as one of the greatest units of the modern era. Kentucky gets a chance to show it can compete with the nation's elite programs in a sport that's not basketball.

Kentucky's running game vs. Georgia's defensive front. The Wildcats, who are averaging 214.2 yards per game on the ground, must establish some sort of effective running attack to have any chance of knocking off the nation's top-ranked team. But that's easier said than done against a Bulldogs defense that is surrendering an average of just 64.2 yards rushing. Kentucky ranks next-to-last in the SEC in passing yards; the Wildcats can't afford to get into situations where going to the air is their only alternative.

Kentucky: QB Will Levis. He threw for three touchdowns and ran for two more scores in last week's 42-21 rout of LSU. While his throwing touch has been a work in progress, Levis did complete 14 of 17 passes for 145 yards against the Tigers.

Georgia: TE Brock Bowers. The freshman has emerged as one of the offense's biggest weapons, leading the team with 20 catches for 315 yards and four touchdowns. His size (6-foot-4, 230 pounds) and speed make him a tough matchup for opposing defenses.

Georgia has allowed just 33 points — a nation-leading 5.5 a game — and that includes a pick-six touchdown scored by UAB. This is the fewest points given up by the Bulldogs through six games since 1935. ... Georgia's defense also leads the country in total yards (201.2 per game) and passing yards (137.0). ... Kentucky is 6-0 for the first time since 1950. ... The Bulldogs moved up to No. 1 in The Associated Press rankings with Alabama's loss to Texas A&M. It marks the first time Georgia has held that spot during the season since 1982. ... The Bulldogs have won 11 straight games in the series. Their last loss to the Wildcats was a 27-24 setback in 2009. ... Georgia leads the SEC and ranks six nationally with 22 sacks. ... QB Stetson Bennett has started three games for the Bulldogs filling in for injured JT Daniels.