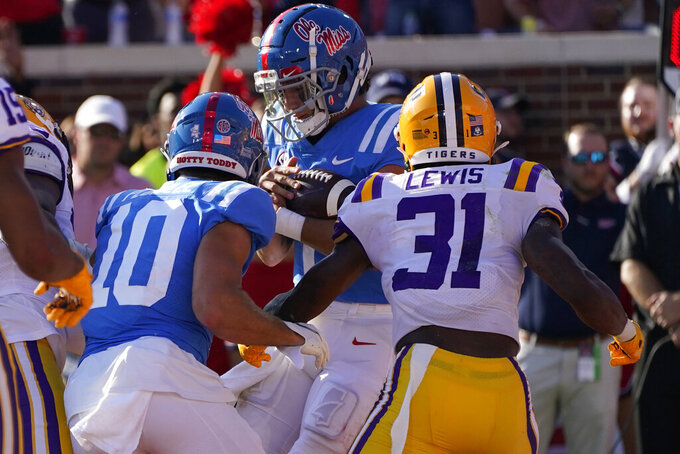 Mississippi's ambitions have quietly grown along with each passing win and notch in the rankings.

Now, the 1 0th-ranked Rebels (6-1, 3-1 Southeastern Conference) will try to maintain their momentum and remain in Western Division contention Saturday night when they visit to No. 18 Auburn (5-2, 2-1).

The winner remains the biggest division challenger to No. 3 Alabama. The Rebels have already topped their win total of coach Lane Kiffin's pandemic-shortened, 5-5 debut season after three straight victories to earn their first top 10 ranking since 2015.

“I feel like maybe last year if we would have hit six wins, we would have been really excited,” wide receiver Miles Battle said. “But now we're looking more toward bigger goals and those playoffs.

"We're not really just worried about being bowl eligible, we're trying to go 1-0 every week.”

Auburn is actually in control of its own destiny in the division with Alabama awaiting at season's end. The Tigers are coming off a 38-23 road win over then-No. 17 Arkansas.

“We won a really good game against Arkansas and I think there was a lot of energy coming off that game,” Auburn coach Bryan Harsin said.

The Rebels' Matt Corral is one of college football's most prolific passers, but he's also a big threat on the ground. Auburn's Bo Nix is a scrambler who can run, too.

Corral has run for a team-high 474 yards and nine touchdowns.

“He throws the ball very well. He does a very good job on play action. He runs the ball hard, and he runs it physical at his position.”

Nix has run for 159 yards and two touchdowns, and his biggest pass of the season was on the run against LSU.

Battle shifted back from defensive back to receiver because of injuries at the position after the Tennessee game. Battle, who has 11 tackles, made an 18-yard catch against LSU and said he's only working at receiver in practice. He's still studying the opposing offense, though.

Both defenses have shown a knack for getting to the quarterback, even if the two QBs in this game are elusive. The Tigers are the only SEC team with three players logging at least four sacks.

The Rebels, led by SEC sack leader Sam Williams, are second in the SEC and 12th nationally in sacks per game (3.3).

The quarterbacks are far from the only runners on each team. The Rebels have three running backs with 300-plus yards and are third natonally at 263.3 rushing yards per game. Snoop Conner has run for nine touchdowns.

Auburn's Tank Bigsby has run for 526 yards while freshman Jarquez Hunter has gained 492.

Auburn defenders know they're likely to face some fourth-down attempts. The Rebels have converted 23 of 30, leading the nation in both categories.

“We just have to stay ready and stay prepared," Auburn defensive end Colby Wooden said. “That’s when you’ve got to play one more play."