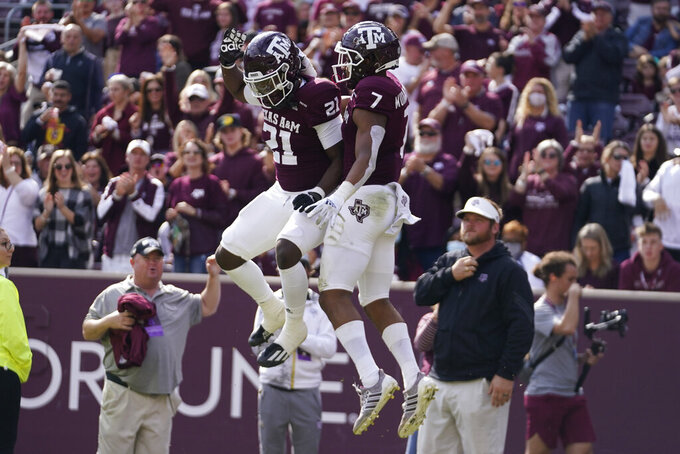 Line: Texas A&M by 6 1/2, according to FanDuel Sportsbook.

Texas A&M can improve its bowl options by finishing the regular season with nine victories and keep alive a shot at its first 10-win season since it went 11-2 in 2012. LSU needs a victory to reach standard bowl eligibility (although there's a slim possibility it could be asked to fill a potential bowl vacancy at 5-7) and avoid its first losing season since 1999.

Texas A&M's running back tandem of Isaiah Spiller (third in the SEC with 984 yards rushing) and versatile Devon Achane (1,328 all-purpose yards), against an LSU defense led by Butkus Award finalist Damone Clark. LSU has allowed 265 yards rushing combined in its past three games (vs. Alabama, Arkansas and Louisiana-Monroe). Clark leads the nation in tackles with 125.

Texas A&M: Freshman WR Moose Muhammad had a breakout performance last week against Prairie View in just the second game of his career. He had five catches for 77 yards and two touchdowns in the win over the Panthers. Muhammad should continue to be an important part of the offense this week in the second game since WR Demond Demas' season-ending leg injury.

LSU: Freshman WR Malik Nabers had a breakout game last week with 143 yards and a TD against ULM.

Texas A&M has won just two of nine games against LSU since joining the SEC. It is 0-4 at Tiger Stadium during that span, but has won two of the past three meetings. ... The Aggies rank second in the SEC in both scoring defense (14.9 points allowed per game) and in passing defense (182.4 yards allowed per game). ... Aggies coach Jimbo Fisher, a former LSU offensive coordinator from 2000 to 2006, is 34-13 at Texas A&M. Fisher was hired by then-Aggies athletic director Scott Woodward, who is now the athletic director at LSU. ... LSU coach Ed Orgeron is entering his final regular-season game with the Tigers, having agreed to step down following this season. He has said he'd like to coach in a bowl game, should LSU get a bid, but would have to discuss that with the administration first. ... LSU QB Max Johnson is coming off his fifth career 300-yard passing game last week, giving him four this season. ... LSU has not lost a home game to Texas A&M since 1994.