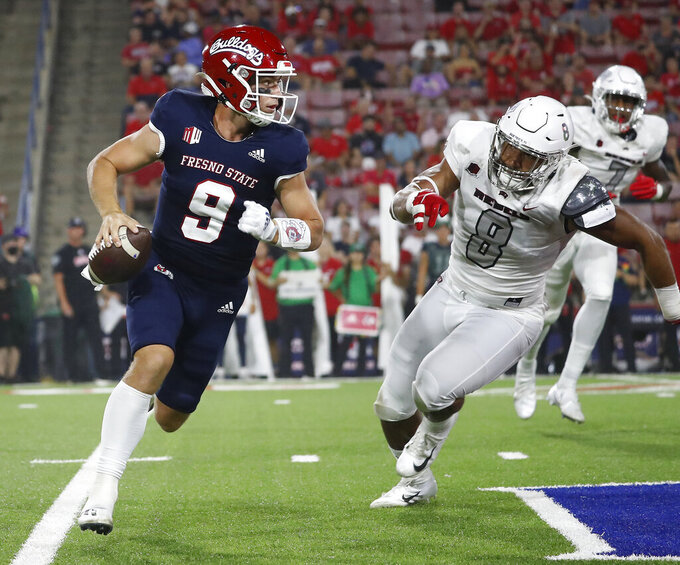 HONOLULU (AP) — No. 18 Fresno State will look to continue making noise this weekend, even if everything around the Bulldogs is silent.

The Bulldogs will be seeking a fourth straight victory Saturday when they visit Hawaii, which won't allow fans in the Clarence T.C. Ching Athletic Complex because of local government mandates barring large gatherings due to COVID-19 concerns. Hawaii is the only one of 130 FBS programs not allowing fans in the stands.

“You know, last year wasn’t a lot of fun without fans, so it’s going to be a little bit of that," Fresno State coach Kalen DeBoer said. "But I think where we’re at as a football team right now, and what we’re playing for each and every week, is a huge asset for us going into this football game, where you gotta have that internal fire and that internal motivation to be driven to get it done this Saturday.”

In its two other road games this season, Fresno State played before more than 43,000 spectators at Oregon and more than 50,000 at UCLA.

“We’ve had such electric atmospheres really at every game, so this is going to be considerably different and that’s where we need to have a great week of preparation because preparation breeds confidence, confidence brings on the energy that is deep,” DeBoer said. “It can’t be this fake energy that all of a sudden comes to life Friday afternoon or Saturday morning."

The Bulldogs (4-1, 1-0 Mountain West) have won their last three games and are coming off a comeback 38-30 victory over UNLV last Friday.

Hawaii will be playing without fans for the third time this season at the 9,000-seat on-campus facility that this year replaced its longtime home venue, Aloha Stadium.

Senior quarterback Jake Haener has been quite prolific in his short time at Fresno State. In just 11 career games, the Washington transfer has logged eight 300-yard passing games, including four this season.

“His preparation and what he puts into it is a big reason for his success, not just the talent and the group around him, so as long as he does that and keeps staying the course with his preparation, the sky is the limit for him and more great things are gonna happen throughout the year,” DeBoer said.

Hawaii receiver Calvin Turner Jr. has proven to be one of the most explosive players in the Mountain West. The senior from Savannah, Georgia, has lined up at slot receiver, running back, wildcat quarterback and returner on kickoffs and punts.

Turner has produced a pair of highlight-reel touchdowns this season. His first was a circuitous 34-yard run in the first quarter against Portland State and last week he reversed field 20 yards on a jet sweep and eluded a number of would-be tacklers on his way to a 14-yard TD run.

“It’s all about, just consistently coaching your players and having them know the importance of your pursuit angles and you have to have that attitude of, ‘If I don’t beat you there, I’ll meet you there.’ And everyone has to pursue because you can’t just think that (he’s) down, because there’s some times where two or three guys had him in their grasps and then all of a sudden — woosh — he pops out the backside and he’s got the speed and agility to run away from everybody on the field,” Fresno State defensive coordinator William Inge said.

Turner has scored in four straight games and has six touchdowns this season.