No. 19 Liberty brings its storybook season to UConn 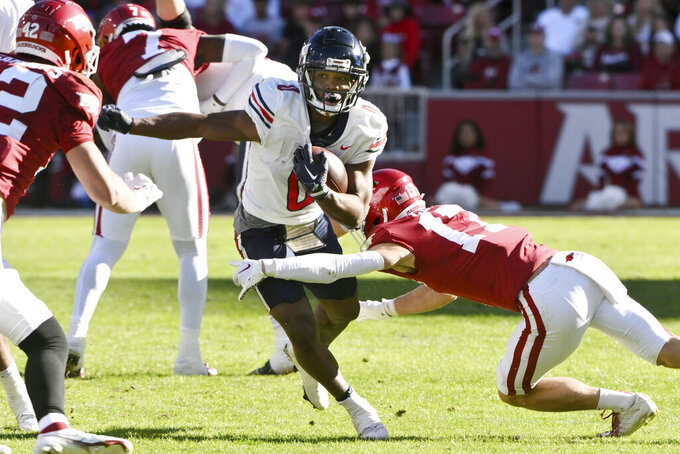 Liberty running back Dae Dae Hunter (0) runs the ball against Arkansas during the first half of an NCAA college football game Saturday, Nov. 5, 2022, in Fayetteville, Ark. (AP Photo/Michael Woods)

While Freeze has savored the Flames’ 21-19 win at Arkansas, he understands the importance of staying in the moment and keeping a proper perspective heading into Saturday’s game at UConn.

“Obviously, it’s a ‘what have you done for me lately’ world,” Freeze said. “We’ll have to fight and guard against coming off two huge, emotional wins over BYU and Arkansas. You better get your mind right and get back to work.”

With a couple more wins, No. 19 Liberty (8-1) could be firmly in the mix for a New Year’s Six bowl. But fellow FBS independent UConn (5-5) is making strides of its own, with first-year coach Jim Mora ushering in one of the nation’s biggest turnarounds.

The Huskies, already with more wins this year than the past three seasons combined (4-32), are on the verge of bowl eligibility for the first time since 2015.

“They get after it,” Mora said. “They’re a really good group of defensive players.”

The Huskies are 0-2 against ranked teams this season, having lost to Michigan and NC State, but confidence is higher now.

Liberty has started three different quarterbacks this season and Freeze has said that when transfer Charlie Brewer is ready to return from injury, he’d be the starter again. Well, Brewer is back, but Johnathan Bennett is 5-0 as the starter and has started the last four games, engineering a 41-14 blowout of BYU and last week’s victory at Arkansas.

“It’s going to be hard for me to not have J.B. as a part of this,” Freeze said. “Hopefully we’ll get Kaidon (Salter) back also, so we’ll be blessed to have all three. We’ll see how they perform in practice, and which one gives us the best chance to win.”

UConn may welcome back two big pieces in its passing game in Keelan Marion and Cam Ross. Both receivers practiced this week to varying degrees, according to Mora.

Marion, the team’s leading receiver last season, broke his collarbone in the opener against Utah State, then sprained his ankle in his first game back against Boston College two months later. Ross broke his right foot early last season, then broke his left one in August.

“(Ross) would be the guy that we’ll have to wait the longest to see,” Mora said. “I think he’ll be able to do some things.”

Meanwhile, Liberty may be without leading rusher Dae Dae Hunter, who injured his knee against Arkansas and was awaiting an MRI.

Weather could be a factor, with forecasts calling for a 50% chance of rain Saturday morning and winds up to 15 mph, with a high temperature of 70. While conditions may be sloppy, Mora doesn’t seem concerned.

“It just doesn’t matter,” Mora said. “We’re going to both play on the same field. There’s nothing you can do about it.”

TOP OF THE HEAP

Liberty leads the nation in sacks per game (3.78) and tackles for loss per game (9.3) and ranks eighth with 20 turnovers gained. The Flames had a season-high 14 tackles for loss at Arkansas, including four sacks, and stuffed a potential game-tying, two-point try with 1:11 to play.

“We just wanted to make sure our guys were in the best position to have one-on-one matchups,” co-defensive coordinator Josh Aldridge said. “I mean, you saw a lot of movement and things like that. That’s what gave them problems.”

Liberty has won three straight road games since losing at Wake Forest in September. The Flames’ 4-1 record away from home this season is their best as an FBS program.