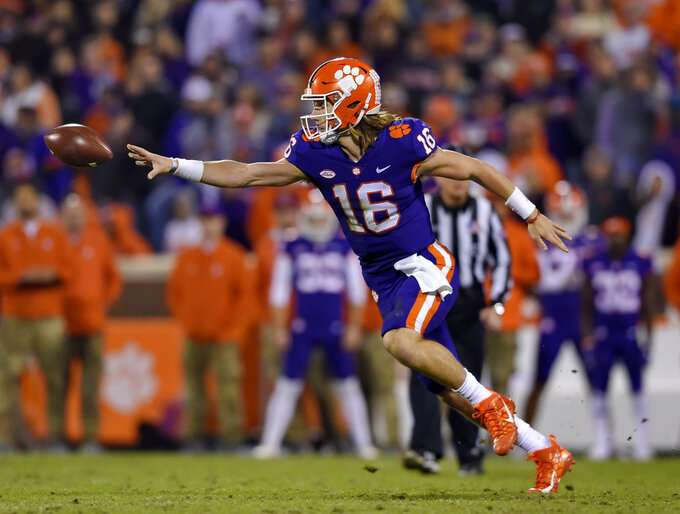 Clemson quarterback Trevor Lawrence tosses the ball to Travis Etienne during the second half of an NCAA college football game against Duke on Saturday, Nov. 17, 2018, in Clemson, S.C. (AP Photo/Richard Shiro)

Bentley, a junior, has started the past two games against Clemson — both demoralizing losses where the Gamecocks (6-4) were badly overmatched and lost by a combined 90-17 margin.

Lawrence, the 6-foot-6 long-haired freshman — he's nicknamed "Sunshine" after T.C. Williams High quarterback Ronnie Bass made famous in "Remember The Titans" — gets his first chance to lead the second-ranked Tigers (11-0) into what many consider is the biggest sporting event in South Carolina each year.

It's Bentley's chance to erase many bad rivalry memories and gain his place in the state's most talked-about game.

"He's a three-year starter and not only is he better, but we are much better around him," Gamecocks coach Will Muschamp said .

Bentley and South Carolina struggled the past two years, the quarterback throwing for a combined 167 yards with three interceptions and just one touchdown in his two starts.

Bentley won't worry about that, confident his play the past few weeks has helped energize South Carolina's offense that's averaged about 43 points a game the past three weeks.

"You can't get too wrapped up in that," Bentley said. "We have the mindset that this is 2018 South Carolina playing 2018 Clemson."

That Clemson is still among the country's best and Lawrence has been a big reason why. He tied for the Atlantic Coast Conference lead with 21 touchdowns and has just four interceptions, by far the fewest among the league's top 10 passers.

Lawrence is eager to continue that run against Gamecocks.

"It's going to be awesome," Lawrence said. "We want to finish the last game of the season the right way."

Lawrence has done about everything right so far — both on and off the field.

The Clemson QB said all the right things when he shared the quarterback spot with last year's starter, Kelly Bryant. He was humble and honored when his one-time mentor in Bryant left the team after getting demoted. And he has helped Clemson light up opponents ever since with the Tigers averaging 47 points a game in his seven starts.

Some other things to watch for when South Carolina visits No. 2 Clemson:

Clemson has the chance for its fifth straight rivalry win, its longest such streak since winning seven consecutive times over the Gamecocks from 1934-40. The Tigers' run follows South Carolina's streak of five in row from 2009-13 with Steve Spurrier as coach and NFL players like Stephon Gilmore, Jadeveon Clowney and Alshon Jeffery playing starring roles.

South Carolina receiver Deebo Samuel is back for a final time facing Clemson after missing last year's game with an injury. Samuel caught five passes for 104 yards and a touchdown in a 37-32 loss to Clemson in 2015. A year later at Death Valley, Samuel has South Carolina's lone touchdown in a 56-7 Clemson blowout before sitting out last year. "He's as good a player as we've seen all year. He's a game changer," Clemson coach Dabo Swinney said.

Clemson tailback Travis Etienne runs hard. He's also hard on himself. The sophomore was yelling on the sidelines in the opening half of a 35-6 win over Duke, not at coaches and teammates but at himself after he believed he missed chances for big, big runs. Etienne leads the ACC with 1,157 yards and 17 TDs. His next touchdown run would surpass the single-season school record.

It's been a patchwork mesh for South Carolina coach Will Muschamp finding heathy defensive players. The Gamecocks will be without linebacker-defensive end Bryson Allen-Williams due to an ankle injury that required surgery. Defensive end Aaron Stirling has also been banged up and missed last week's win over Chattanooga. Defensive backs Jaycee Horn has also dealt with injuries that have cost him playing time.

Both Clemson and South Carolina have another game after what's typically the regular-season ender. The Tigers clinched the ACC Atlantic Division two weeks ago and will play Coastal Division champ Pittsburgh in the ACC championship game in Charlotte, North Carolina, on Dec. 1. Earlier that day, the Gamecocks will take on Akron at home in a makeup contest for a game with Marshall back on Sept. 15 cancelled due to Hurricane Florence.