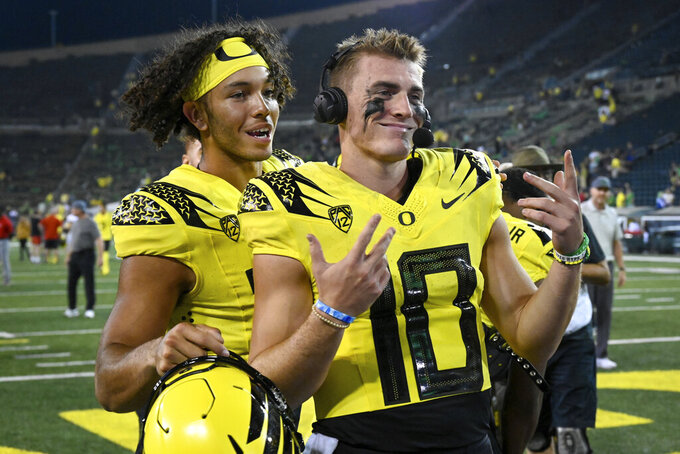 No. 12 Brigham Young (2-0) at No. 25 Oregon (1-1), Saturday. The Ducks play their second ranked opponent of the season when the Cougars make their first trip to Autzen Stadium since 1990. Oregon has won 29 straight nonconference home games, the second=longest active streak in FBS, including seven against ranked teams. QB Bo Nix had five touchdown passes against Eastern Washington last week after throwing two interceptions in the opener vs. Georgia. BYU won all five games against Pac-12 teams last season, including two against ranked teams. Jaren Hall is 7-1 as a starting QB against ranked teams.

North Dakota State (2-0) at Arizona (1-1), Saturday. The defending Football Championship Subdivision champion Bison are facing a Pac-12 team for the first time. They have a six-game winning streak against FBS teams and are 9-3 overall. The Wildcats are 15-1 vs FCS opponents with the only loss occurring last year against Northern Arizona. WR Jacob Cowing leads the conference with 15 receptions and has four touchdowns.

Jaydn Ott, California. The running back has been the named the Pac-12 Freshman of the Week the first two weeks. His 156 rushing yards are fifth among FBS true freshman as the Golden Bears (2-0) face Notre Dame (0-2) for the first time since 1967.

No. 7 Southern California (2-0) vs. Fresno State (1-1), Saturday. The Trojans are in the top 10 for the first time since 2017, but are facing a Bulldogs squad that has split its last six games against Pac-12 teams. Each of the three losses has been by one score. USC QB Caleb Williams has completed 79.6% of his passes and has thrown six TDs.