No. 7 Michigan St looks to stop march of No. 4 Buckeyes 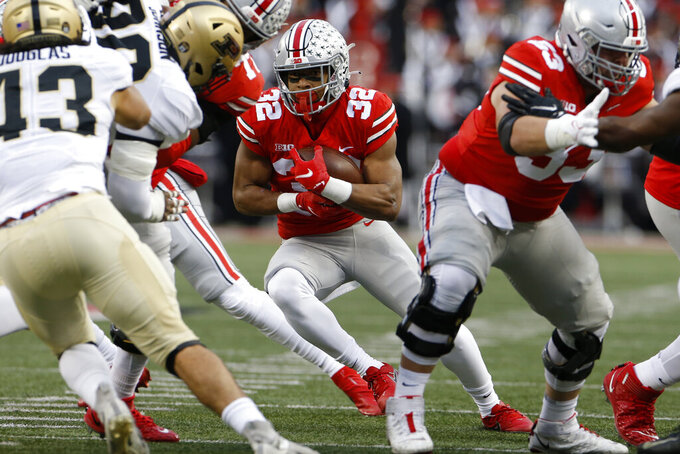 Ohio State running back TreVeyon Henderson cuts up field against Purdue during the first half of an NCAA college football game, Saturday, Nov. 13, 2021, in Columbus, Ohio. (AP Photo/Jay LaPrete) 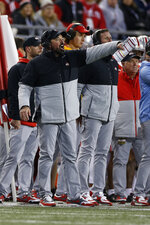 COLUMBUS, Ohio (AP) — When Mel Tucker took the coaching job at Michigan State, he promised his players they would play for championships.

The second-year coach has the Spartans knocking at the door already.

“I meant that," Tucker said of his pronouncement in February 2020 when he replaced the retiring Mark Dantonio. "We’re in November, and we’re in the hunt.”

The hunt is about to get a good deal more rugged for surprising No. 7 Michigan State (9-1, 6-1 Big Ten). The Spartans are a big underdog against No. 4 Ohio State (9-1, 7-0) on Saturday in Columbus, where 100,000 fans in Ohio Stadium will make the visitors' expedition even more difficult.

This game is huge. The winner stays in the race for the Big Ten East and the College Football Playoff. The loser likely will be left outside looking in.

Michigan State dealt No. 8 Michigan its only loss of the season, but then the Spartans were upset by unranked Purdue, a team torched by the Buckeyes last week.

Of course, Ohio State and Michigan clash in “The Game” next week at Ann Arbor to finish the regular season.

“I feel we’re in the best conference in college football right now. It shows,” Ohio State defensive end Zach Harrison said. “We got three teams in the top 10. That’s not by accident.”

The Buckeyes, winners of eight straight since being upset by Oregon in Week 2, aren't worried about anybody else right now.

“We always say it’s always been about us,” Day said. “It doesn’t matter who we’re playing."

Tucker appreciates that teams only get so many opportunities to be where the Spartans are this late in the season. Michigan State finished a dismal 2-5 in the pandemic-shortened 2020 season, Tucker's first in East Lansing after a year at Colorado.

“It's November, we're coming down the stretch,” he said. “The most important game is the next game. We're going on the road against a great football team, and we need to prepare that way all week. We have to dig deeper into the details.”

Tucker, who is from Cleveland, was on Jim Tressel’s staff at Ohio State from 2001 to 2004. He was the Buckeyes’ defensive backs coach in 2002 when they won the national title and was co-defensive coordinator in his last season with the team.

“I can put things in perspective,” Tucker said. “I can help our team in terms of making sure that they understand what to expect going into Ohio Stadium.”

With two explosive offensives on the field, and the Spartans’ shaky pass defense, there could be a lot of points scored. The thought of that doesn’t sit well with Tucker.

“A shootout, to me, when I hear something like that it makes me want to vomit,” he said.

Michigan State running back Kenneth Walker leads major college football with 1,473 yards rushing. The Wake Forest transfer has scored 18 touchdowns, trailing only Marshall running back Rasheen Ali. Even though Walker has an opportunity to boost his chances of winning the Heisman Trophy with a good performance against Ohio State, he insisted he's not thinking about that.

His main competition for the award may be across the field in Buckeyes quarterback C.J. Stroud.

“I don’t feel any pressure," he said. "I’m just focusing on us winning together.”

The Buckeyes have a couple of pretty good running backs of their own. Freshman TreVeyon Henderson, whose 7.34 yards-per-carry average is second in the FBS, has been splitting time with fellow freshman Miyan Williams. Henderson had 13 carries for 98 yards and two touchdowns in the Purdue win. Williams came on late and rolled up 117 more. Day plans to keep using both.

"They do complement each other,” Day said.

The team's most experienced back, Master Teague, has been out with an injury and Day said he's “kind of day to day right now."