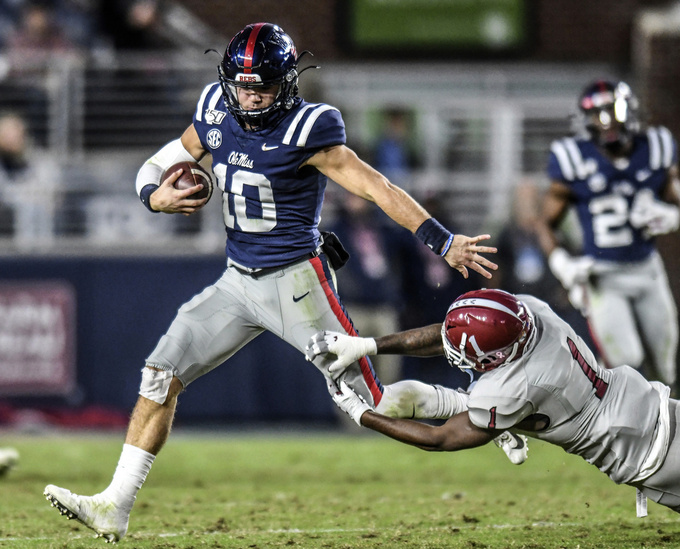 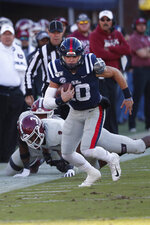 OXFORD, Miss. (AP) — Mississippi coach Matt Luke can't help but smile when he discusses the development and performance of his freshman class, especially at the skill positions.

"Plumlee made plays consistently and managed the game well," Luke said. "He's still got some plays he can make, but it's fun to see our freshman running backs making plays for us."

Plumlee directed scoring drives on four of the opening five possessions as the Rebels (4-6) built an insurmountable 24-3 halftime lead. Plumlee rushed for 177 yards on 12 carries with scoring runs of 2 and 18 yards and finished 11 of 17 for 124 passing yards in a dominating performance that ended in the third quarter.

"I was fortunate to break the line of scrimmage a few times," Plumlee said. "At the next level, there aren't as many guys you have to outrun, or make miss, or bob and weave to get free."

"It was a pretty good game for me, but there are still some plays out there I missed and can make," Conner said. "Running the ball is what we do. But, we've got to keep working and making it better."

New Mexico State (0-9) avoided the shutout on a 34-yard field goal by Dylan Brown. Josh Adkins was 25 of 35 for 127 yards passing, but could manage only two completions longer than 10 yards. Matthew Young had a game-high 16 tackles.

"We knew coming in that Ole Miss was really impressive on defense," New Mexico State Doug Martin said. "We played Alabama in the second game of the year and in my opinion, you could switch the jerseys and there's no difference."

New Mexico State: The Aggies weren't expected to win an SEC road game, but the margin of defeat was discouraging. Of the three remaining games, only the visiting UTEP Miners (1-7) have a losing record and provides the best opportunity for New Mexico State to snap an 11-game losing streak.

"I thought we had some guys play well," Martin said. "Linebacker Rashie Hodge (seven tackles, one fumble recovery, one pass broken up) has gotten better each week."

Ole Miss: The season narrative will be largely defined by the performance and results of the next two weeks with No. 1 LSU and rival Mississippi State. The Rebels have young talent and been fun to watch, but have not been able to win games decided by nine points or less in five tries. An upset win in either or both games would confirm the program is trending in the right direction.

"Those are our two biggest rivals and both are huge games," Luke said. "But we can't worry about them, we have to focus on us, get better and line up and play."

Martin, whose team lost 62-10 at Alabama on September 2, remained firm in the postgame press conference regarding defensive comparisons to Ole Miss. "Those guys are every bit as good as Alabama on that side of the ball," Martin said. Alabama defeated Ole Miss 59-31 in Tuscaloosa on September 7.