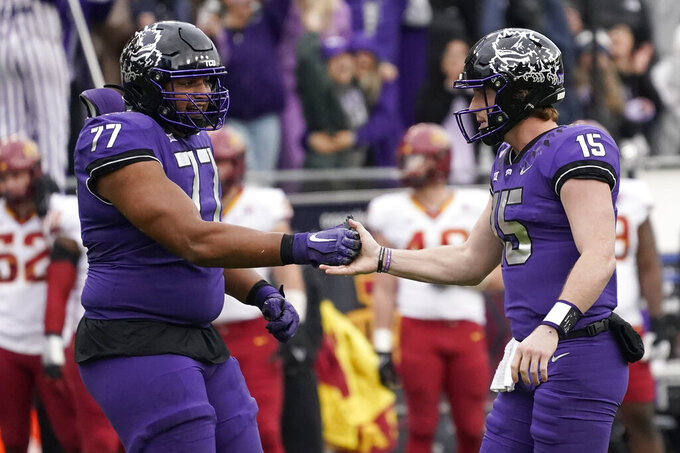 ARLINGTON, Texas (AP) — It has been quite a comeback for third-ranked TCU, one much bigger than that 18-point deficit the Horned Frogs erased to beat Kansas State six weeks ago.

"A majority of our team, we took a lot of Ls last year,” running back Kendre Miller said. “We’re just proving to ourselves really that this is who we could be. … I feel like it shocked lot of people, like even people on our team, that we were going to do this good, me included.”

Dykes took over a few days before last year’s Big 12 championship game, with the Frogs already done playing after going 23-24 in a four-year span since being in the 2017 title game. Their last four games were after coach Gary Patterson’s sudden departure during his 21st season.

Now after plenty of close games – seven wins in a row by 10 points or less – TCU is playing for a Big 12 title that would make it the first league team other than Oklahoma to make the four-team playoff. The Frogs’ undefeated regular season is the first by a Big 12 team since Texas in 2009.

“A chance to win that is obviously a big deal, and obviously our players know the implications of all that on the bigger picture as well,” said Dykes, an off-field analyst for Patterson in 2017 before a successful stint as SMU’s coach. “I don’t get a sense that the guys are tight or any of that. ... They’re just excited about the opportunity.”

Still, they know the challenge of trying to beat a team twice in the same season. K-State jumped ahead 28-10 on Oct. 22 before the Frogs scored the game’s last 28 points.

“I was sick after that game,” Kansas State center Hayden Gillum said. “It was probably one of the harder losses in the year. … We know we owe these guys one.”

The Wildcats won their last three games, two on the road — and had to win all of those to make their first Big 12 title game since 2003, when they beat then-No. 1 and undefeated Oklahoma 35-7. They are 4-1 since the TCU loss, averaging 40 points a game and giving up a total of only 15 after halftime during that span.

“We have an opportunity to play one of the best teams in the country. We earned the opportunity to get to this point,” fourth-year Wildcats coach Chris Klieman said. “Never looked ahead and never looked behind.”

After K-State dual-threat QB Adrian Martinez got hurt on the opening series at TCU, Will Howard took his first snaps of the season after 10 starts the previous two years. He ran for 14 yards on his first play, then completed his first seven passes for 156 yards and two touchdowns as the Wildcats went up 28-10 midway through the second quarter. Their third quarterback threw an interception on his only play when Howard left the game briefly after banging his shoulder.

“You forget we played three quarterbacks that game. I’d forgotten,” Klieman said. “It was a physical game. We lost some bodies.”

Deuce Vaughn, K-State's 5-foot-6 dynamo, has rushed for 1,295 yards overall, and has 25 catches for 274 yards with all three of his receiving TDs the past five games.

At 6 feet and 220 pounds, Miller has 1,260 yards and 16 touchdowns rushing for TCU. His 13 games in a row running for a TD mark the longest active FBS streak, and is two short of LaDainian Tomlinson’s school record. Miller had 153 yards with two second-half TDs in the comeback against the Wildcats.

Neither Howard or TCU quarterback Max Duggan began the season as starters.

Duggan lost his starting job going into the season, but took over in the second half of the opener after Chandler Morris sprained his knee. Duggan, set for his 41st career start, leads the Big 12 with 3,070 yards and 29 TDs passing, and only three interceptions.

Martinez missed the last two games after getting hurt again. Klieman said there was a chance he could return Saturday and be involved in some packages, but that Howard, with 13 passing TDs in his five games, “is going to be the guy.”

TCU receiver Quentin Johnston, an NFL prospect, has 49 catches for 764 yards and five TDs, even as the 6-foot-4 junior has dealt with an ankle issue for more than a month.

He was held out of last week's 62-14 win over Iowa State in hopes of having him as healthy as possible for the Big 12 title game. Dykes said Johnston looked better in practice this week than he had for some time, “Just like his old self.”

NO SOONERS, NO HORNS

This is the second Big 12 title game since 11-time winner Oklahoma and Texas, the only league teams to win national titles, announced they would be moving to the SEC no later than 2025. The Sooners and/or Longhorns have been part of 17 of the first 18 Big 12 title games before missing the last two — with four different teams making it instead. They will be part of a 14-team Big 12 next season after four new teams join.