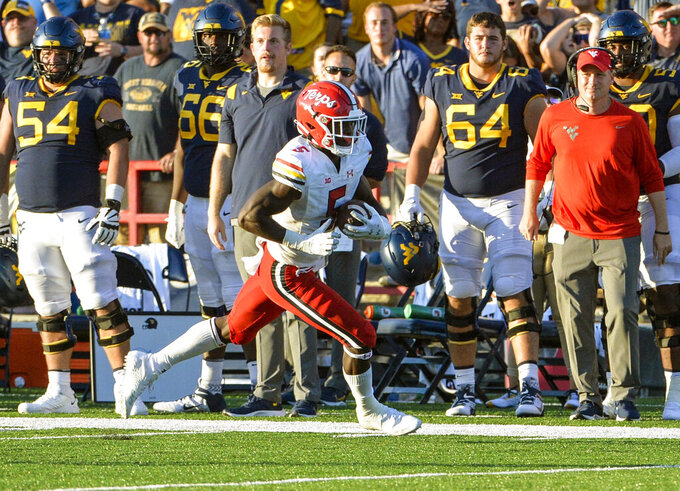 Maryland's Rakim Jarrett catches a pass for a touchdown against West Virginia during the second half of an NCAA college football game Saturday, Sept. 4, 2021 in College Park, Md. (Kevin Richardson/The Baltimore Sun via AP)

COLLEGE PARK, Md. (AP) — Maryland could hardly have scripted a more exciting start to the season — a win at home on a beautiful September day, with quarterback Taulia Tagovailoa throwing for a couple long touchdowns in front of an energized home crowd.

Now the Terrapins will try to build on that. It won't necessarily be easy.

“The goal for us is to not play the team, but to play to the standard," coach Michael Locksley said Tuesday. “That's been our talk with our team throughout the course of the summer. We set standards and we play the standards, we don't play the opponent.”

Translation: The Terps need to avoid a letdown this weekend against Howard, an FCS opponent Maryland beat 79-0 a couple years ago. The Terrapins opened this season with a 30-24 victory over West Virginia, but there's a lot of work still to do.

As encouraging as last week's performance was, Maryland has won big games before in recent Septembers, only to struggle the rest of the way. The Terps opened the season with wins over Texas in 2017 and 2018, but they finished with a losing record both times. In 2019 — Locksley's first year at the helm — Maryland routed a nationally ranked Syracuse team 63-20 in the second game of the season, then won only one more time that year.

“To compare the ’19 team to the ‘21 team would be unfair to both,” Locksley said. “We’re trying to create an identity here as the '21 version of the Terps. Was really impressed with the first impression that they made.”

There was a lot to like about Maryland's identity Saturday. The Terps benefitted from a plus-four advantage in turnovers, but that was in part because they moved the ball without making too many mistakes on offense. Tagovailoa threw for three touchdowns in all, including a 66-yard strike to Dontay Demus and a 60-yarder to Rakim Jarrett.

In an area where college basketball often overshadows football, if Maryland is going to build excitement around this program, it will need to win consistently — and playing entertaining football also helps. Last weekend was a blueprint of sorts.

Tagovailoa showed promise during last year's shortened season, and he's off to a fine start in 2021.

“I feel more comfortable around here," said Tagovailoa, who transferred from Alabama before the 2020 season. "I've been here for quite a while now. Just getting comfortable in the system that (new offensive coordinator Dan) Enos has for us. ... When I'm comfortable, I'm just more loose."

Tagovailoa has plenty of good options to throw to. Demus has caught a TD in five straight games, the longest streak at Maryland since at least 1985. He and Jarrett combined for 255 yards receiving last week, the most by any duo for the Terps since 2010.

“Those guys are really good. Going against them in practice every day, I think that helps the DBs,” defensive back Tarheeb Still said. "They have tall guys, they have fast. They got speed. They got everything.”

Heading into Saturday night's game against Howard, the Terps do have a few things to clean up. Although Tagovailoa was very good in general, there were some mistakes that could have been costly. In the second quarter, for example, he took a 13-yard loss on a third-down sack that forced Maryland to try a 51-yard field goal. It missed.

“The gift and the curse of Lia is that he doesn't give up on plays,” Locksley said.

NOTES: Locksley said LB Fa'Najae Gotay has an upper-body injury that requires surgery. It's not clear yet if that will end Gotay's season.