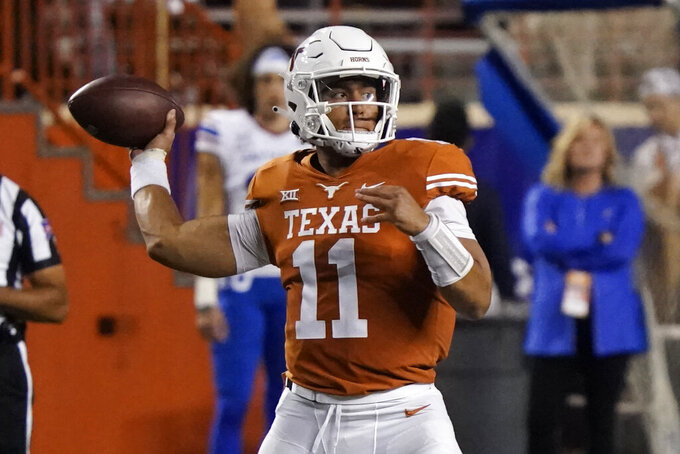 “I think he's the best one right now,” new offensive coordinator Mark Whipple said. “That might change tomorrow. There's nothing set in stone.”

Among the Cornhuskers' priorities is sorting out the quarterback situation following Adrian Martinez's transfer to Kansas State. Thompson and Chubba Purdy, who transferred from Florida State, are competing with returnees Logan Smothers and Heinrich Haarberg.

“What I saw today, attitude-wise and talent-wise, we’ve got enough there to be more than successful,” Whipple said.

Whipple said Purdy was nicked up and didn't do much at the first practice.

Thompson was a backup to Hudson Card for the first two games at Texas before taking over the starting role. He went 4-6 as the starter and passed for 2,113 yards. Texas finished 5-7.

Thompson has ample opportunity at Nebraska, which finished 3-9 overall and 1-8 and tied for last in the Big Ten West.

Thompson and Purdy are part of an offensive overhaul that saw Martinez leave after starting four years — he could have stayed for a fifth because the NCAA extended eligibility due to the pandemic — and coach Scott Frost replace four of his five offensive assistants.

Thompson showed strong leadership upon his arrival, Frost said, and excelled during the team's winter program. Whipple said it's critical to develop depth behind Thompson.

“This day and age,” Whipple said, “it’s changed because of the speed of the game, and more quarterbacks get hurt. Why? I think it’s because you’re throwing it more, and if you’re running option there’s a chance you’re going to get hurt.”

Whipple indicated he didn't want to see his quarterbacks taking as much contact as Martinez did. Martinez led the team in rushing attempts each of the past three years and had the second most in 2018. He played much of last season with a broken jaw and had a run of injuries throughout his career.