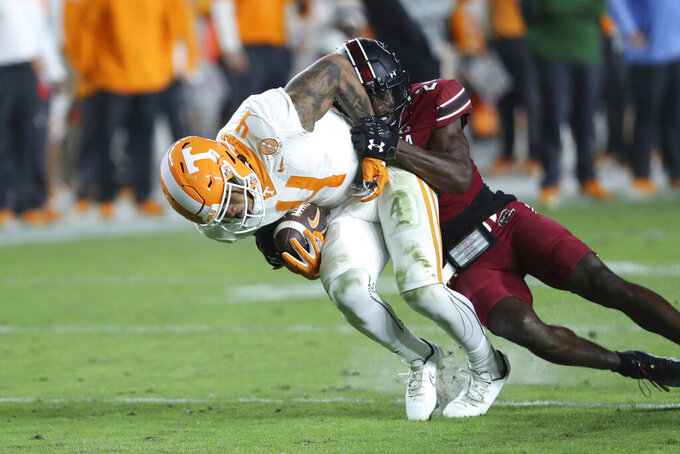 College Football Playoff contenders lived on the edge in Week 12, with the top four teams all teetering to varying degrees and at various points. Then No. 5 Tennessee went down with a thud.

For No. 4 TCU, it was just another Saturday.

“It looks more frantic than it is,” TCU coach Sonny Dykes said about the game-winning play. He could have been describing the Horned Frogs' season.

TCU and No. 3 Michigan both needed field goals in the final second to stay unbeaten.

No. 1 Georgia slogged through a road game against Kentucky, never seriously threatened but never truly comfortable.

No. 2 Ohio State trailed at the half against Maryland, and had the Terps bearing down in the fourth quarter, before closing them out.

While it looked a little shaky at times, Michigan (11-0) against Ohio State (11-0) for the right to go to the Big Ten championship is set. Hopefully, the Wolverines will have star tailback Blake Corum (knee) close to 100%.

"What more could you ask for?” Buckeyes defensive end Zach Harrison said.

The big upset came under the lights in Columbia, South Carolina. The Gamecocks, a team that lost 38-6 at Florida last week and was averaging 20 points per game in Southeastern Conference play coming in, took apart Tennessee.

No unranked team had ever scored more points against a top-five team. Spencer Rattler, the Oklahoma transfer, threw for 438 yards and six touchdowns and Tennessee's Heisman Trophy contender Hendon Hooker went out in the fourth quarter with a leg injury.

"For us to grow as a program, we need to look at this opportunity and understand what happened,” Vols coach Josh Heupel said.

With the Vols' loss, several weeks of chatter about multiple SEC teams making the playoff pretty much goes out the window. It could still happen if LSU beats Georgia in the SEC title game. But good luck with that, Tigers.

As for TCU, the Hypnotoads don't have to worry about anybody else. The final chapter of one of the best stories of the season has yet to be written.

Dykes, who replaced TCU great Gary Patterson after last season, didn't remake the roster through the transfer portal. He took what he had and turned it into a playoff contender in what is the most competitive conference, top to bottom, in the country.

TCU is a turnaround team led by a quarterback who didn't even win the job heading into the season.Chandler Morris was the man coming out of the preseason, but an injury cleared the way for Max Duggan. The senior has shown flashes of greatness, if not consistency, during his time in Fort Worth, seized the opportunity and has become a star.

Duggan passed for 327 yards against Baylor and marched the Frogs into field-goal range as the clock wound down.

“I thought Max did what Max does,” Dykes said.

It looked like a fire drill as TCU ran its field-goal unit on the field, but Griffin Kell calmly booted a 40-yarder as time expired.

The Frogs have won eight games by 10 points or fewer. By comparison, Georgia, Ohio State and Michigan have a combined four victories by 10 points of fewer. The Buckeyes have none.

That's not a knock on TCU, but it is fair to wonder when the magic will run out. Since the Big 12 went to a nine-game conference schedule in 2011, only once has a team gone 9-0 in the league and never has a team entered the championship game unbeaten overall.

The Frogs head home next week to face Iowa State, which is in last place in the Big 12 but perfectly epitomizes the conference. The Cyclones have lost six games by single-digit margins.

Awaiting the Frogs in the Big 12 title game likely will be No. 19 Kansas State. The Wildcats need to beat Kansas next week to lock up a spot. Texas is still alive, too.

K-State, you might remember, led TCU 28-10 before the Frogs came roaring back — and the Wildcats were forced to play a third-string quarterback because of injuries. The Frogs won 38-28.

Among the blue bloods vying for a spot in the CFP, the Horned Frogs maybe the outliers but they are without question worthy.

Lincoln Riley's portal all-stars at Southern California are now at the center of the college football universe.

The seventh-ranked Trojans beat No. 16 UCLA in exactly the type of back-and-forth point-spree that was expected.

Caleb Williams, the quarterback who followed Riley from Oklahoma to USC, had 502 total yards.

Williams and the Trojans have rolled through a soft schedule, getting few big-stage games before Saturday. The Pac-12 showdown in the Rose Bowl between the future Big Ten schools was the first of what could be three straight games that could determine a playoff spot and the Heisman Trophy.

If USC can beat No. 18 Notre Dame next week and then win the Pac-12 title game, it'll be hard to keep the Trojans out of the playoff at 12-1 and the brilliant Williams from becoming the eighth Southern Cal player to win the Heisman.

“I just want to say, college football on the West Coast, and here in LA, is alive and well,” Riley told reporters.

The Pac-12's other marquee game also went down to the wire, with a hobbled Bo Nix and No. 12 Oregon beating No. 10 Utah to put the Ducks in position to face the Trojans in Las Vegas. Oregon needs to beat No. 25 Oregon State next week to set a Pac-12 title game matching first-year coaches Dan Lanning and Riley. ... Just when Drake Maye's Heisman campaign was heating up, No. 13 North Carolina was shut out in the second half in a surprising loss to Georgia Tech. Maye didn't throw a touchdown pass for the first time this season. ... The Tar Heels misstep wasn't great news for No. 9 Clemson and the ACC. Even with Tennessee's loss, the Tigers are toward the end of the queue of CFP contenders. ... Somehow No. 14 Mississippi ran for 463 yards and was blown out by Arkansas. The Razorbacks, behind Rocket Sanders' 232 yards rushing on three TDs, were up 42-6 heading into the fourth quarter. ... Vanderbilt now has a two-game SEC winning streak. A week after the Commodores snapped a 26-game conference skid against Kentucky, they beat Florida at home for the first time since 1988 ... Indiana won for the first time since mid-September, beating Michigan State in overtime while completing two passes. ... Not to be outdone, Army and Navy both won without completing a pass. The Midshipmen finished their non-Army portion of the schedule by upsetting No. 17 UCF. The loss doesn't knock the Knights out of AAC championship game contention, but it does mean the winner of No. 21 Tulane and No. 22 Cincinnati on Black Friday will host it. ... Arizona QB Jayden de Laura, a Washington State transfer, said Saturday's game against his former team was “personal.” The Cougars won and intercepted de Laura four times. ... In the Ohio Valley Conference, a tie for the league championship between Tennessee-Martin and Southeast Missouri State was broken by a coin flip, streamed live online, because they didn't play in the regular season. SEMO won the flip and an automatic bid to the FCS playoffs. UT-Martin will await Sunday's selection show and hope for an at-large bid. ... Iowa is inevitable. The Hawkeyes won their fourth straight game in typical Iowa fashion over Minnesota, and now they need only to beat Nebraska on Black Friday to clinch the Big Ten West for the second straight year. ... Wisconsin edged Nebraska with a late touchdown to secure bowl eligibility for the 21st consecutive year. It hasn't been the prettiest 4-2 run for the Badgers. Will it be enough to get Wisconsin to take the interim tag off Jim Leonhard? Well, Wisconsin posted the job, as required by state law, right after the game. A good sign that it will name Leonhard after the required seven-day wait.