UConn looking for bowl eligiblity vs. No. 19 Liberty 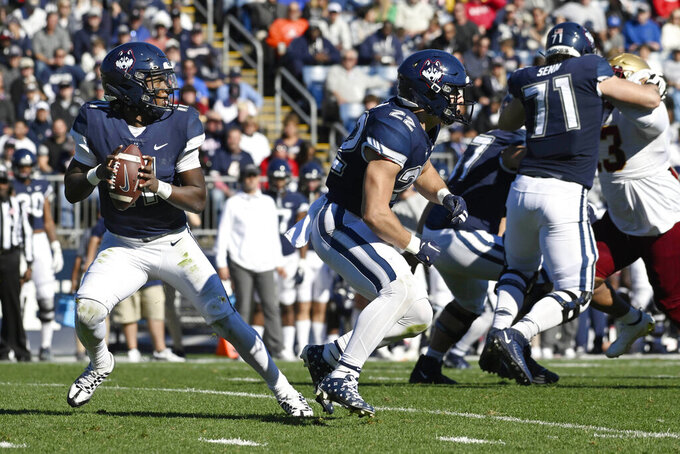 Connecticut quarterback Zion Turner (11) drops back to pass during the first half of an NCAA college football game against Boston College at Pratt & Whitney Stadium at Rentschler Field in East Hartford, Conn., Saturday, Oct. 29, 2022. (Jessica Hill/Hartford Courant via AP)

Line: Liberty by 14 ½, according to FanDuel Sportsbook.

UConn needs to win one of its final two games under first-year coach Jim Mora to qualify for its first bowl since 2015. The Huskies have already surpassed their win total (four) from the previous three seasons combined. Meanwhile, fellow FBS independent Liberty will be in position for an invitation to a New Year’s Six bowl should it win its final three games. The Flames may also crack the College Football Playoff rankings for the first time with another victory.

Despite losing Nathan Carter to a season-ending shoulder injury in September, UConn’s running game has remained potent. The Huskies are averaging 187.6 yards per game (38th in FBS) on the ground, thanks in part to Devontae Houston and Victor Rosa. Their effectiveness has taken some pressure off freshman quarterback Zion Turner. Liberty, however, is coming off a strong showing against Arkansas, in which it held the SEC’s second-best rushing attack to 3.4 yards per carry.

Liberty: DE Durrell Johnson has 3.5 sacks over his last four games and leads the Flames with seven this season. He had two against Arkansas, in addition to a career-high nine tackles. He ranks third nationally with 1.7 tackles for loss per game.