West Virginia gets challenge of playing Army in Liberty Bowl 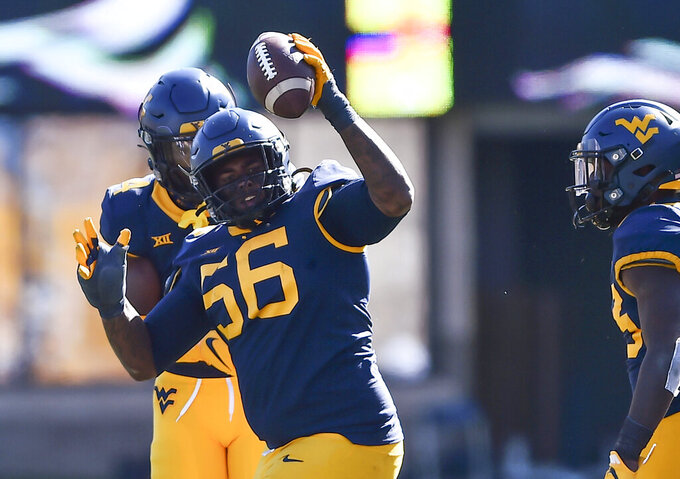 He will get the chance when his Mountaineers take on Army in the Liberty Bowl after the Black Knights were tapped as a COVID-19 replacement for Tennessee. Brown sees this as a big opportunity for West Virginia.

“It's maybe going to be the most watched bowl game outside the national semifinals,” Brown said. “And I understand, and our kids understand, there probably won't be a whole lot of people outside the state of West Virginia pulling for us. It's going to be a fun afternoon.”

West Virginia (5-4) comes into Thursday's game in Memphis, Tennessee, as the 15th winningest program in college football with this the Mountaineers' 38th bowl all-time. The Mountaineers haven't played since a 42-6 loss at Iowa State on Dec. 5.

This is just the ninth bowl for Army (9-2) and fourth with coach Jeff Monken.

Army has gotten a lot of attention and support after nearly being left out of the bowl season when opt-outs left Independence Bowl officials with no opponent for the Black Knights, forcing a cancellation.

The Black Knights, who beat Air Force 10-7 for the Commander-in-Chief trophy Dec. 19, got their chance a day later after Tennessee returned several positive COVID-19 test results.

“Everybody making that push and saying these guys deserved to play probably just helped when a team wasn’t able to play that the Liberty Bowl stepped up and said that, ‘We’re going to take that team, they deserve it,’" Monken said. "We’re grateful for them.”

Army is happy to be playing in a bowl because the Black Knights have a chance to finish off a rare double-digit win season. Before Monken took over for the 2014 season, Army had only one 10-win season in 1996 under Bob Sutton. Army went 10-3 with Monken in 2017 and set an academy record with 11 wins in 2018. The senior class has a West Point-record 35 wins.

“Coach Monken’s been making it known to us, he’s really trying to encourage us to get it,” captain Sandon McCoy said. “We are the winningest class. Just adding another win would just be a legacy for the seniors to leave here.”

West Virginia had to switch gears quickly to start preparing for Army's triple option offense, a rushing attack that is fourth nationally piling up 281.3 yards per game. The Mountaineers rank 24th defending the run, giving up 126.2 yards, and they're led by All-American lineman Darius Stills.

Brown said he plans to stick with the Mountaineers' base defense and schemes they've used all season. Stills said the key is being aggressive.

“Army's a very disciplined team,” Stills said. “They come off the ball hard, low every single snap and they do not quit until the whistle's blown.”

The Mountaineers come in with a pass-heavy offense led by Jarret Doege who completes nearly 25 passes per game, which is eighth-most in the country. He's thrown for 2,428 yards with only three interceptions this season. He's helped by running back Leddie Brown who averages 105 yards rushing a game.

West Virginia will be without linebacker Tony Fields who is skipping this game to prepare for the NFL draft. Brown said senior Dylan Tonkery and Josh Chandler will play helping replace Fields. Senior safety Scottie Young, who transferred along with Fields from Arizona, will be playing.

The Black Knights have blocked a program record seven kicks this season, most in the country. They blocked three punts, two field goal attempts and two extra points. Ryan Duran has three blocks himself, tying him for most in the nation.

The forecast for Thursday during the game is a drenching rain with temperatures in the mid-50s. That’s right up the Black Knights’ alley.

“We practice in the elements. We’re rarely indoors. It’s kind of a requirement, I guess,” senior captain Mike Johnson said. “Personally, I love playing in the snow and the rain. I think it kind of adds a little gritty nature to it.”