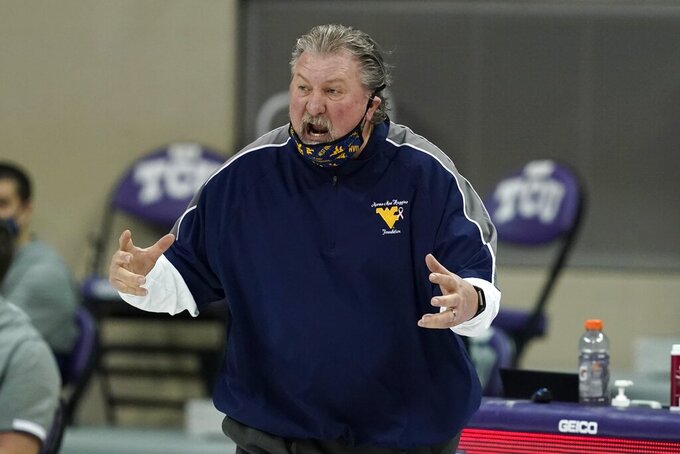 FILE - West Virginia head coach Bob Huggins shouts at an official during the second half of an NCAA college basketball game against TCU in Fort Worth, Texas, in this Tuesday, Feb. 23, 2021. Huggins enters his 40th season as a head coach with 900 career wins and a new two-year contract extension. (AP Photo/Tony Gutierrez, File)

This season figures to be a challenge after five of the Mountaineers' top eight scorers departed and it takes time for seven newcomers to adjust to Huggins' system.

While acknowledging he has multiple players capable of scoring, Huggins doesn’t want to rely on offensive shootouts in a defensive-focused league. He would like to get back to playing solid defense. West Virginia's 72 points allowed per game last season ranked eighth in the Big 12.

“There’s a lot of unknowns," Huggins said. “I think it’s probably fair to say that they could possibly make up for bad defense because they can shoot the ball.”

Part of the scoring load will fall on guards Taz Sherman and Sean McNeil, who return after going through the NBA draft process.

Despite the addition of three graduate transfers, Huggins said there is a big learning curve.

“The way we play is a whole lot different than what most people play,” Huggins said. “And the intensity we play with and how hard we play is different. We’re not going to stand in a 2-3 zone. It’s going to be a learning experience for all of them.”

West Virginia tied with Texas for third place in the Big 12 last season and reached the NCAA Tournament for the 10th time under Huggins. The Mountaineers lost to Syracuse in the second round to finish 19-10.

Just as university presidents and chancellors control the College Football Playoff, Huggins suggested that Power Five schools ditch the NCAA basketball tournament and have their own national championship event to give them more control over the flow of money and remain financially relevant.

Huggins said that on many campuses, revenues from college basketball are earmarked toward supporting the football program.

While the possibility of a smaller basketball school ousting a more prominent opponent is part of the NCAA Tournament’s allure, “those Cinderella schools are putting 200 people, at best, in their gym,” Huggins said. “We’re putting 14,000.”

The departure of forward Derek Culver for the NBA draft left the biggest hole on the roster. Culver was the second-leading scorer at 14.3 points per game and grabbed one-fourth of the team’s rebounds last season.

"What we’re lacking right now is somebody we can throw it close to and score,” Huggins said.

Graduate transfers Dimon Carrigan and Pauly Paulicap both averaged about seven points per game last season and bring an ability for altering shots on the defensive end. Carrigan averaged 2.5 blocks at Florida International and Paulicap had 1.3 per game at DePaul.

Sherman was West Virginia's best player off the bench a year ago and averaged 13.4 points. McNeil is a streaky shooter who sank five or more 3-pointers five times but had 13 games where he made one or none.

Forward Jalen Bridges is poised to have a breakout season after being thrust into the starting lineup a year ago when Oscar Tshiebwe left in late December.

“I've really never played in a system to where I just had to be that guy and take a lot of shots,” Bridges said. "As we go day by day, I'm starting to get more comfortable with having a more assertive role."

Isaiah Cottrell brings an inside-outside presence that the Mountaineers could use to further offset Culver's departure. Cottrell tore an Achilles' tendon 10 games into his freshman season, is fully healed and has been pushing his shooting range farther from the basket.

West Virginia opens Nov. 9 at home against Oakland and has featured nonconference matchups in Morgantown against Pittsburgh on Nov. 12 and No. 24 Connecticut on Dec. 8. The Mountaineers open Big 12 play on the road at No. 5 Texas on Jan. 1 and TCU on Jan. 3.