Abrupt end has No. 20 Washington hungry for redemption 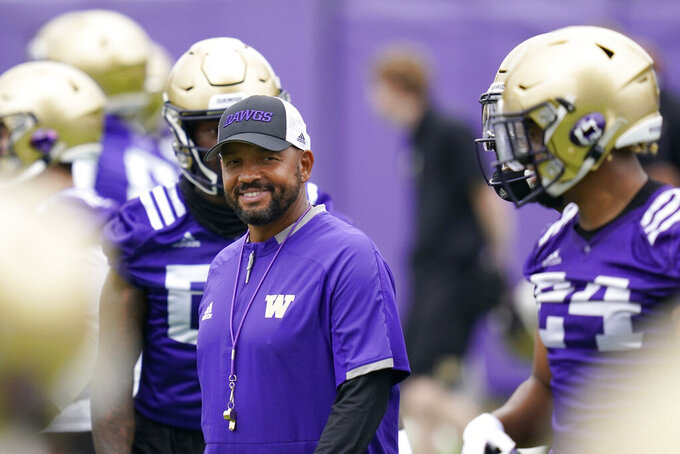 FILE - Washington head coach Jimmy Lake stands with players during NCAA college football practice in Seattle, in this Friday, Aug. 6, 2021, file photo. Washington begins the 2021 season as one of the favorites in the Pac-12 North Division, while also trying to erase the bad taste of how last year ended when a COVID-19 outbreak brought a sudden end to an already truncated schedule. (AP Photo/Elaine Thompson, File)

SEATTLE (AP) — It would be understandable if No. 20 Washington is entering the new season feeling a need to seek redemption considering the way the first year under Jimmy Lake ended.

Abruptly and with major disappointment.

Washington’s showdown with Oregon was canceled after a COVID-19 outbreak. Its spot in the 2020 Pac-12 championship game went to the Ducks and the Huskies were left home without a bowl game opportunity.

“We felt like we had a really good team in 2020. We obviously all went through a very adverse situation with the pandemic,” Lake said. “But then having our season cut short, we kept the virus out of our building for so long. As everybody can see, the coronavirus does not discriminate. Ended our season short. So there’s really a sense of unfinished business with our football team.”

Washington begins this year as one of the favorites in the Pac-12 North, while also trying to erase any disappointment lingering from last year.

“I think the team’s gonna be really hungry,” said quarterback Dylan Morris. “Getting those four games and then missing those last potential two, all that and the Pac-12 championship, left a kind of sick taste in our mouth. We’re ready to go for a full season to try and get that Pac-12 championship.”

The Huskies have possibly the easiest path of any Pac-12 team. Following a Week 2 matchup at Michigan, all of Washington’s toughest games take place at home.

It has a similar feel to 2016, when a talented team took advantage of a favorable schedule and crashed the College Football Playoff.

“I think this can be the best team that I’ve been a part of here,” tight end Cade Otten said. “I think we have the players. I think we have the characters to make it fun, but also have a high standard of character and attitude and work ethic. I’ve played with a lot of great players here. I’ve watched a lot of great players here. But I think this team can be special.”

Lake put a quick end to any speculation about a quarterback battle on the first day of camp when he announced Morris as the starter. There was a debate whether Colorado State transfer Patrick O’Brien or highly touted freshman Sam Huard could insert themselves into the competition but the Huskies seem settled.

Morris averaged 225 yards per game passing and threw for four touchdowns during the four-game 2020 season.

The Huskies may end up with one of the top offensive lines in the country, highlighted by left tackle Jaxson Kirkland. Washington returns all five starters up front along with Otten, a do-everything tight end.

Kirkland is the anchor on Morris’ blindside, but the talent on the line is deep with left guard Ulumoo Ale, center Luke Wattenberg, right guard Henry Bainivalu and right tackle Victor Curne. The line should allow Washington to run with its rotation of backs and adequately protect Morris when the time comes to throw.

One of the biggest revelations during the shortened season was Zion Tupuola-Fetui, who emerged as an elite pass rusher. Tupuola-Fetui had seven sacks in just three games and seemed poised for a breakout 2021 season but suffered a torn Achilles tendon during spring practice. Washington expects Tupuola-Fetui back during the regular season but its pass rush will take a hit.

Even without Tupuola-Fetui, the Huskies are expected to be solid defensively. The run of elite defensive backs continues with cornerback Trent McDuffie and Washington has a solid defensive end in veteran Ryan Bowman and standout inside linebacker in Edefuan Ulofoshio.

The biggest question for Washington may be how well the interior defensive line is able to muddle the middle and slow opponents’ running game, which averaged 4.5 yards per carry last season.

While the Huskies open on Sept. 4 against Montana at home, it’s the following week at Michigan that’s among the most anticipated nonconference games of the season. The schedule falls in Washington’s favor after that. California (Sept. 25), Oregon (Nov. 6) and Arizona State (Nov. 13) all come to Husky Stadium. Washington’s biggest road test appears to be Oct. 30 at Stanford. Plus, the Huskies avoid Utah and USC, two of the favorites in the Pac-12 South.