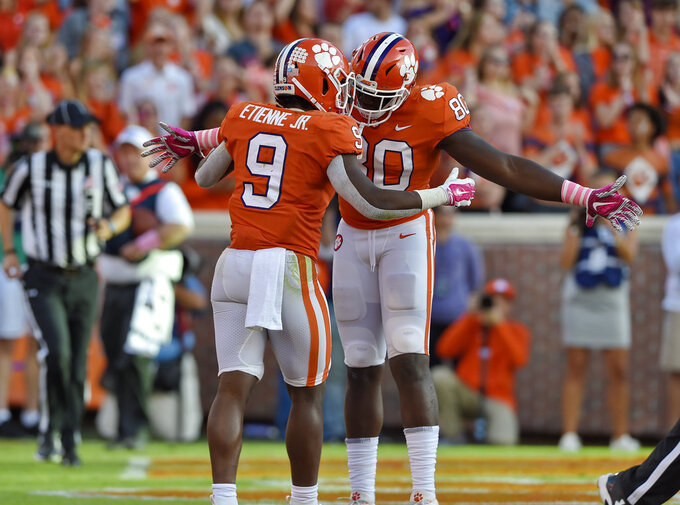 Clemson's Travis Etienne (9) celebrates with Milan Richard after scoring a touchdown during the second half of an NCAA college football game against North Carolina State, Saturday, Oct. 20, 2018, in Clemson, S.C. (AP Photo/Richard Shiro)

Clemson is back at No. 2 in The Associated Press college football poll behind top-ranked Alabama, moving up to where it started, after a convincing victory and Ohio State's first loss of the season.

The Crimson Tide are a unanimous No. 1, with all 61 first-place votes Sunday, for the first time this season.

The Tigers trailed only Alabama in the preseason rankings, but a couple of close wins in September — combined with seemingly impressive performances by other highly ranked teams — dragged Clemson to as low as No. 4.

Coming off a lopsided win against North Carolina State, Clemson rose a spot this week. Notre Dame is No. 3 and LSU is No. 4, setting the stage for a top-five matchup between the Tigers and Crimson Tide in Baton Rouge, Louisiana, on Nov. 3. Both have an open date this week.

Michigan is No. 5 and Ohio State dropped to No. 11 after being upset by Purdue.

No. 25 Appalachian State is ranked in the AP poll for the first time in school history. The Mountaineers (5-1) have not lost since opening the season with an overtime defeat at Penn State.

"It's awesome to be recognized," Appalachian State coach Scott Satterfield said Sunday. "We've had a lot of positive things happen to our program the last three to four years. The first time we go bowl eligible, which was awesome. Then we go win our first bowl game. That was really cool. And then to go win our first Sun Belt championship two years ago. That was awesome. So there's been a lot of first for us over the last three years. This is another first."

App State transitioned to the FBS, the highest level of Division I football, in 2014 after years as an FCS power. Under former coach Jerry Moore, the Mountaineers were a regular playoff participant. The program peaked in the mid-2000s, winning three straight FCS (Division I-AA) championships from 2005-07. And App State pulled off one of the most stunning upsets in college football history against Michigan in 2007.

Moore retired after the 2012 season and was replaced by Satterfield, a former App State quarterback and assistant coach. The move up in class and into the Sun Belt has been practically seamless. The Mountaineers are 46-23 under Satterfield, with two Sun Belt titles. The only other Sun Belt team to ever be ranked was Troy on Nov. 13, 2016.

"To be recognized in the FBS level football and for our program to be a team that just went through transition four years ago and now to be ranked is pretty remarkable," Satterfield said. "We have a lot of pride, a lot of tradition in our program."

This season's team was expected to contend for another conference championship. A case could be made it is exceeding even those high expectations after replacing four-year starting quarterback Taylor Lamb, two four-year starting offensive linemen, four defensive players that were four-year starters and veteran defensive coordinator Nate Woody, who left for Georgia Tech.

Satterfield said this is maybe his fastest team at App State and credited senior safety Josh Thomas, senior defensive tackle MyQuon Stout and fourth-year junior offensive tackle Victor Johnson with providing leadership for one of the least experienced rosters in the FBS. Running back Jalin Moore, another senior who was lost for the season to a knee injury two weeks ago, has become a de facto assistant coach for App State.

Since falling to Penn State, the Mountaineers have outscored their opponents 231-49. Next up is a key game for first place in the Sun Belt East at Georgia Southern (6-1, 3-0) on Thursday night.

No. 14 Washington State was the only big mover to rise in the rankings this week, jumping 11 spots after beating Oregon.

— Ohio State dropped out of the top 10 for the first this season, tumbling nine spots.

— No. 19 Oregon dropped seven spots after taking its second loss.

— No. 22 North Carolina State fell six spots after losing for the first time this season.

— No. 23 Utah is ranked for the first time this season, making it five straight years the Utes started the season unranked but moved into the rankings at some point. From 2014-16, Utah started the season outside the Top 25 but finished it ranked. Utah has won three straight, scoring at least 40 points in each game.

— No. 24 Stanford is back in the rankings after falling out two weeks ago.

— Michigan State and Mississippi State fell out of the rankings again after losing for the third time this season.

— Cincinnati's first loss of the season, in overtime to Temple, cost the Bearcats their first ranking since 2012.

No. 7 Georgia vs. No. 9 Florida in Jacksonville, Florida. The first of two games involving the Bulldogs that will decide the SEC East. Georgia faces Kentucky on Nov. 3.

No. 14 Washington State at No. 24 Stanford. Cougars try to grab control of the Pac-12 North.

No. 18 Iowa at No. 17 Penn State. The Nittany Lions will help decide the Big Ten West with home games against the Hawkeyes and No. 20 Wisconsin.