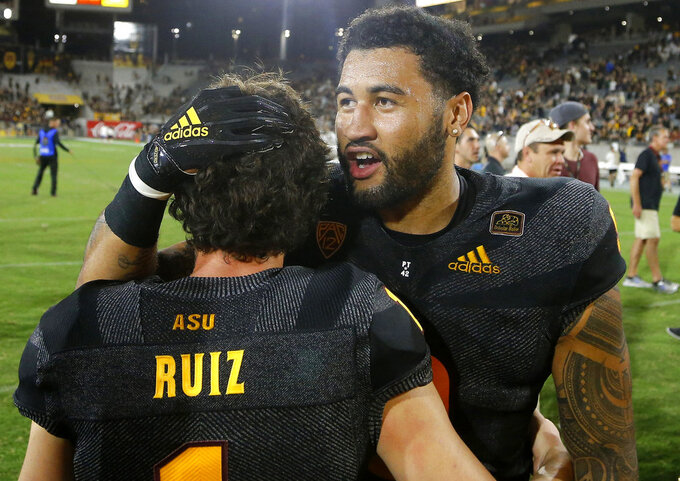 TEMPE, Ariz. (AP) — Herm Edwards had a larger-than-life TV personality with ESPN, shouting out opinions multiple times a day. While coaching the NFL's New York Jets, he had the "You play to win the game!" rant that people still bring up today.

Through two games at Arizona State, Edwards has been mostly subdued, taking a businesslike approach to his first stint as a college coach. Oh, he's still loquacious, still exudes passion, but there's a confident calm to him that has helped Arizona State to a surprising 2-0 start.

"You have to stay humble and hungry," Edwards said after the Sun Devils knocked off No. 15 Michigan State Saturday night.

Edwards' hire was met with criticism after he spent the previous eight years in a television studio and had not worked the sidelines as a coach since the Kansas City Chiefs fired him in 2008.

More eyebrows were raised when the Sun Devils announced the football program would operate under a professional model with Edwards at the helm. Arizona State wasn't given much of a shot to succeed in his first season in the desert, picked to finish last in the Pac-12 South.

After two games, the Sun Devils look like they could contend for the division title, not occupy the bottom rung.

Arizona State routed UTSA 49-7 in its opener, a not-exactly-surprising outcome against a smaller-conference school. The Sun Devils' big test was supposed to be Saturday, when the Big Ten's Spartans rolled into the desert. They never backed down from the challenge, keeping it close behind their defense before the offense found its groove in the second half.

Arizona State scored the final 13 points and shortened the game with a clock-management masterpiece in the final few minutes, winning 16-13 on Brandon Ruiz's 27-yard field goal as time expired.

"We're nowhere near my expectations, but it's fun when you win," Edwards said. "It's another brick on the pile. We're trying to build something here."

Heading into the season, Arizona State was expected to put up points on offense. The Sun Devils had a quick-hitting offense under Todd Graham and still had a bevy talent on the offensive side of the ball.

The defense was the question mark, as it had been under Graham. The Sun Devils were among the nation's worst teams at giving up big plays past few seasons, and this year's defense was expected to have holes.

At least for two games, Arizona State's defense has turned into a strength.

The Sun Devils shut down UTSA in their opener and had an early interception for a touchdown. Arizona State got pushed around up front some by Michigan State, but pushed back when it needed to the most.

The Sun Devils allowed the Spartans to march inside their 10-yard line three times the first three quarters, but had an interception in the end zone and forced Michigan State to kick two field goals.

Arizona State gave up a touchdown in the third quarter, but limited Michigan State after that, repeatedly getting the ball back so the offense could mount the comeback.

"Our defense, man, I'm really proud of them and how they played," quarterback Manny Wilkins said. "It was a hell of an effort on their part and without them we would not win this game."

Nor would they without Wilkins.

The senior missed some deep throws early, but kept the calm that comes with being a three-year starter. He hit N'Keal Harry on the tying touchdown pass in the fourth quarter and orchestrated the final drive, working the clock to leave just enough time for Ruiz to send the ball through the uprights and the Sun Devils charging from the sideline.

"All the mistakes we made, all the throws that I missed, at the end of the day we came in at halftime and made the adjustments that we needed to make," Wilkins said. "And we won the game. That's all that matters at the end of the game."

That's two wins for Edwards and the Sun Devils — and counting.