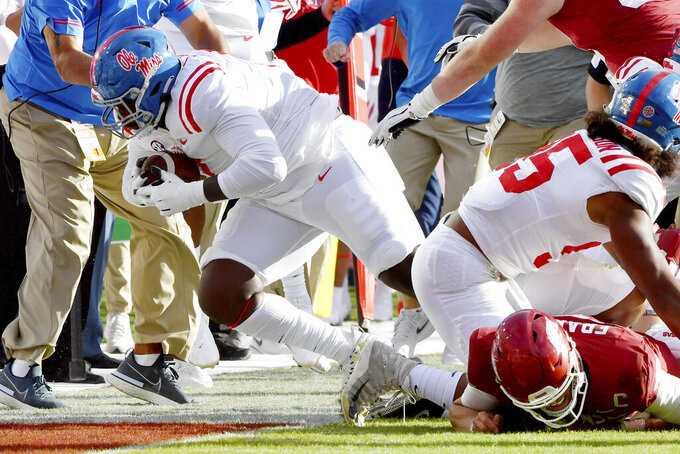 The Razorbacks scored 24 points off seven Ole Miss turnovers and won a second Southeastern Conference game for the first time since 2016, beating the Rebels, 33-21.

The Arkansas (2-2, 2-2) defense flustered Corral, who entered the game second in the SEC in passing efficiency and yards passing.

Arkansas' redshirt freshman Hunter Clark had three of the interceptions, including one to seal the game on Ole Miss’ final drive.

Clark, a walk-on cornerback, was a surprise name on the depth chart last week at Auburn. Against the Rebels, he found himself a surprise starter.

The three first-half turnovers weren’t the only Ole Miss (1-3, 1-3) issue. Twice the Rebels were stopped at the 1 on fourth down. The first time came on a fumble, the second an old-fashioned stuffing.

Throw in the interceptions and Ole Miss coach Lane Kiffin’s demeanor after the game was expected.

“Had we not screwed all that up early, we’re up by three or four scores,” Kiffin said. “You can’t turn the ball over like that and expect to win.”

Kiffin stuck with Corral and the sophomore nearly led a comeback. Corral threw for 200 yards and two scores, which came late in the third quarter and early in the fourth to pull within 20-14.

But Arkansas’ sophomore Treylon Burks answered on the ensuing drive. Burks, who missed last week’s game at Auburn, caught a one-handed touchdown pass in the corner of the end zone. He managed to place one foot inside the end zone before falling out of bounds.

Burks finished with 11 catches for 137 yards and added another 46 yards rushing on four carries. Feleipe Franks was 21-of-34 passing for 244 yards with a touchdown and an interception for Arkansas.

“The drive when it was 20-14 was huge,” Pittman said. “Treylon, what a great catch he had in the corner. What a wonderful catch, an outstanding catch he made. That drive was huge.”

And while the fourth-down failures early stalled the Rebels, the conversions late kept them around. Ole Miss was 5 of 9 on such tries, including a 47-yard run off a fake punt. Later in that drive, Jerrion Ealy ran into the end zone from the 1 to make it 26-21. Ealy finished with 112 yards rushing on 23 carries.

But the giveaways were too much. After forcing an Arkansas punt, Corral threw his fifth interception and Grant Morgan’s 23-yard pick-6 with 3:07 left provided the game’s final points.

Arkansas has won two SEC games for the first time since 2016. The Razorbacks six interceptions were their most since 2003 when they had six against Mississippi State.

Ole Miss sits at the bottom of the SEC West and has given up the most points in the conference.

Arkansas coach Sam Pittman was full of smiles after the game. The Razorbacks hadn’t won an SEC game the last two seasons and only won one the year before that. But he was on the Arkansas staff during the first years of the Bret Bielema era when the Razorbacks went to three straight bowl games.

“Look, there’s not really any pressure on us,” Pittman said. “The expectations weren’t high outside the building. … I don’t know as much about what happened over the last three years here. I knew this was Arkansas and this is where the University of Arkansas is supposed to be on the football field.”

Arkansas has a bye next week before playing on Halloween at No. 11 Texas A&M for the first time since 2012. The teams had played their games at AT&T Stadium in Arlington, Texas, since.

Ole Miss returns home on Saturday to face No. 15 Auburn.