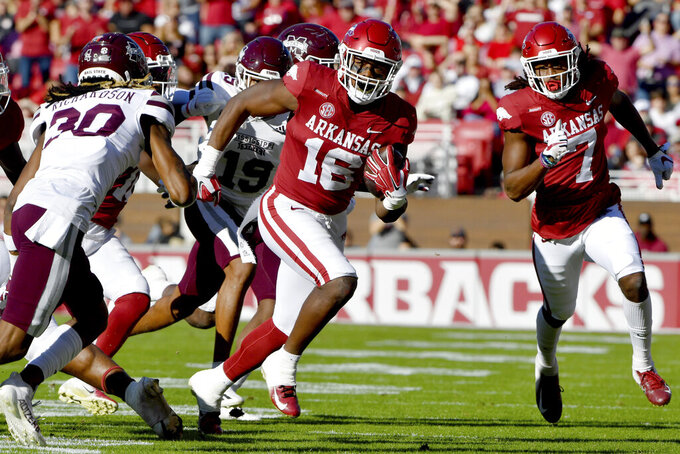 Arkansas receiver Treylon Burks (16) tries to get past Mississippi State defender Decamerion Richardson (30) as he runs the ball during the first half of an NCAA college football game Saturday, Nov. 6, 2021, in Fayetteville, Ark. (AP Photo/Michael Woods)

FAYETTEVILLE, Ark. (AP) — Arkansas’ 31-28 win over Mississippi State on Saturday was not, as coach Sam Pittman said, the Super Bowl.

But for a team two years removed from back-to-back 2-10 seasons, the worst two records of Razorbacks football since World War II, becoming bowl-eligible, in the fashion they did, was high on Pittman’s wishlist.

Trailing 28-23 with one minute left, Arkansas (6-3, 2-3 in SEC) appeared to have lost when KJ Jefferson’s pass into the flat on fourth down from the Mississippi State 25 fell incomplete. But the Bulldogs were called for holding, Arkansas moved up to the 15 and two plays later, Johnson scored on a 4-yard run.

The touchdown came just 2:01 after Mississippi State (5-4, 3-3) had taken the lead on a 15-yard pass from Will Rogers to Jo’quavious Marks. Rogers with 417 yards and four touchdowns, completed three straight passes to move the Bulldogs from their own 25 to the Arkansas 22 and set up the final field-goal attempt.

Nolan McCord, who replaced Brandon Ruiz after Ruiz missed two earlier in the game, including a 22-yarder, sent his kick wide left.

“We didn’t just win the Super Bowl but it feels like it,” Pittman said. “Very, very excited to know we’re going to play in December or January.”

The win made Arkansas (6-3, 2-3) bowl-eligible, under non-COVID qualifications, for the first time since 2016 and gave the Razorbacks their second win this season over a team ranked inside the College Football Playoff top 25. Arkansas began the year 4-0, including a victory over No. 14 Texas A&M, before three straight SEC losses followed.

The Razorbacks led 13-0 before the Mississippi State quarterback, who set the SEC record for completion percentage last week and is ranked No. 3 in FBS in yards per game, marched the Bulldogs 74 yards for a touchdown with seven seconds left in the first half. Rogers gave his team the lead on the opening drive of the second half when he found Rara Thomas for the first of his two touchdown receptions.

Rogers brought Mississippi State back from a two-score deficit again in the fourth quarter when, trailing 23-14, he threw a 37-yard touchdown to Thomas. After an Arkansas missed field goal, Rogers’ 15-yarder to Marks gave the Razorbacks little time.

Little was enough for Arkansas quarterback KJ Jefferson, the first-year starter who led Arkansas on a potential game-winning drive with just over one minute left against Ole Miss in October before the would-be game-winning two-point conversion failed.

Jefferson completed six passes on Arkansas’ final drive and finished with the most efficient game of his career, going 19 of 23 for 191 yards and a touchdown.

“We lost this game by one play, which, we had plenty of plays the first half and in the second half, too, to win this game,” Mississippi State coach Mike Leach said. “You’ve got to make those plays in a comprehensive fashion, one on top of the next.”

Johnson, who began the year as the fourth-string running back, made his first start of the season and ran for 107 yards on 17 carries with two touchdowns. Arkansas wide receiver Treylon Burks, the SEC’s leader in yards receiving, caught six passes for 82 yards and a touchdown.

Pittman continued the on-field celebration in the locker room.

“Like I said, we didn’t win the national championship, but it’s not going to feel a whole lot better than that locker room did hopefully when we have an opportunity to try it.”

Jefferson, the sophomore first-year starter, had only 14 yards rushing on 11 carries, despite averaging 52 yards a game on the ground entering Saturday. Were it not for his scramble on the penultimate play of Arkansas' go-ahead drive, though, the Razorbacks likely wouldn't have won. Jefferson was pressured behind the line of scrimmage, but broke four Mississippi State tackles and turned a four-yard loss into a five-yard gain and a first down.

“He was so poised in that two-minute drive,” Pittman said of his quarterback. “KJ, he really has gotten better. He’s a heck of a quarterback. Going 19 for 23, no interceptions. Played a heck of a football game.”

Pittman thinks Arkansas deserves a spot in the College Football Playoff rankings when they're next released. Mississippi State was No. 17 in the initial rankings and Texas A&M, which Arkansas beat in Week 4, was No. 13.

“They (Mississippi State) were basically looked at as the best 5-3 team in the country,” Pittman said. “I know we played them here, I know we had a bye game, but I also know we won the game. Absolutely I think we’re a top 25 team in the country. We deserve it.”

Arkansas snapped a three-game SEC losing streak and could re-enter the Top 25. The Razorbacks’ win ensures their first .500-or-better regular season since 2016.

Mississippi State lost to Arkansas for the second straight season.

Arkansas travels next week to play LSU in Baton Rouge, where the Razorbacks have won just three times since joining the SEC in 1992, the last of which came in 2015.