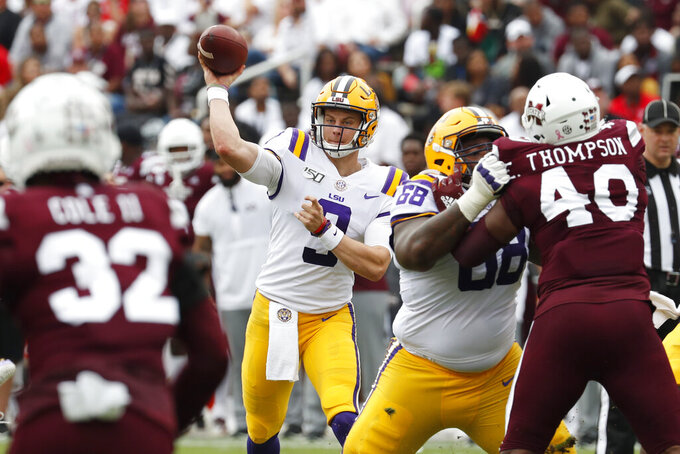 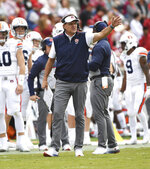 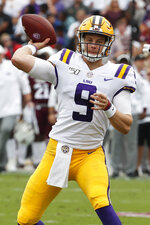 Here are some things to watch during the ninth week of the Southeastern Conference football season.

No. 9 Auburn (6-1, 3-1 SEC) at No. 2 LSU (7-0, 3-0): These two SEC West rivals have a history of playing down-to-the-wire games. Their last three matchups have been decided by a total of 10 points and two of them came down to the final play, including LSU's 22-21 victory last year when Cole Tracy hit a 42-yard field goal as time expired. LSU ranks second among all Football Bowl Subdivision teams in scoring with 50.1 points per game, while Auburn's Derrick Brown leads one of the nation's top defensive lines.

Tennessee left guard Trey Smith vs. South Carolina defensive tackle Javon Kinlaw: While the Gamecocks like to move Kinlaw around on the defensive line, he often lines up on the right side and consequently should be matched up with Smith for at least part of Saturday's South Carolina-Tennessee game. Both Smith and Kinlaw are NFL prospects. Kinlaw has collected five sacks to rank third in the SEC. Smith's career was in jeopardy after blood clots were found in his lungs, but the former five-star recruit was medically cleared before the season and has led a young Tennessee offensive line.

No. 1 Alabama has used an FBS-leading eight true freshman starters this season. ... Mississippi State's FBS-leading streak of 22 straight games with a takeaway ended last week in its 36-13 loss to LSU. ... LSU has scored at least 35 points in an FBS-leading 10 straight games. ... Auburn has set an NCAA record by making 304 consecutive extra-point attempts. The record had been owned by Florida State, which made 302 straight PAT tries from 2012-16. ... Texas A&M's Kellen Mond is one of four players to compile over 6,000 career yards passing and 1,000 career yards rushing while playing their entire careers at Power Five schools. The others are Oklahoma's Jalen Hurts, Texas' Sam Ehlinger and Michigan State's Brian Lewerke. ... Each of the last seven South Carolina-Tennessee games has been decided by six points or less. ... Missouri has scored touchdowns after each of the last 13 interceptions its defense has recorded. ... The top two FBS teams in net punting are Kentucky (45.27) and South Carolina (44.50).

Tennessee (2-5, 1-3) and South Carolina (3-4, 2-3) have both been playing better lately as they prepare to face off Saturday in Knoxville. South Carolina has beaten Tennessee three straight times and is a four-point favorite this week, but the Volunteers' home-field advantage could result in an upset. This game's hard to predict because of Tennessee's unsettled quarterback situation, as Brian Maurer has sustained concussions the last couple of weeks and probably won't play. Tennessee's hopes could depend on whether Tim Jordan runs as effectively as he did last week, when he gained 94 yards on 17 carries in a 35-13 loss to Alabama.

The high ankle sprain sidelining Alabama quarterback and Heisman Trophy candidate Tua Tagovailoa has put more responsibility on Najee Harris and the top-ranked Crimson Tide's rushing attack. Harris responded last week by rushing for 105 yards and two touchdowns and also catching four passes for 48 yards against Tennessee. Harris has rushed for over 100 yards in three of his last four games and could have another big performance Saturday when Tagovailoa sits out Alabama's game with Arkansas.