Badgers' ground attack has plenty of options and uncertainty 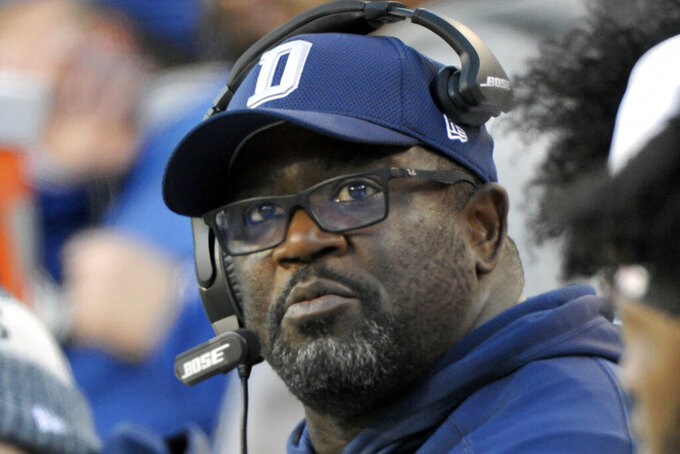 FILE - Then-Dallas Cowboys running backs coach Gary Brown looks at the score board during an NFL football game against the Washington Redskins in Landover, Md., in this Sunday, Oct. 21, 2018, file photo. Wisconsin’s run-oriented tradition coaxed former NFL assistant Gary Brown into the college ranks after a bout with cancer caused him to spend a year away from the game. The Badgers’ new running backs coach wants to get Wisconsin back among the nation’s elite rushing attacks as he mentors a group returning Jalen Berger and adding Clemson transfer Chez Mellusi and freshman Braelon Allen. (AP Photo/Mark Tenally, File)

MADISON, Wis. (AP) — Wisconsin believes it has enough talent in the backfield to regain its status as one of the top Power Five rushing attacks after taking a step back last year.

Which player will get used most often remains uncertain.

“I’d really like to have a lead dog, like a Batman-and-Robin type situation, but we’ll see how that plays out,” Brown said. “If we don’t get that lead dog and have to break carries up into thirds or halves, we’ll do that.”

That certainly has the attention of his current pupils.

“He coached Ezekiel Elliott, and that happens to be one of my favorite running backs,” Berger said. “Whenever I hear him talk about (Elliott), I just zone everything out and listen to everything he says.”

After Garrett was fired at the end of the 2019 season, Brown spent last season away from football to fight cancer for a second time. Brown’s wife disclosed on social media that a tumor had been found around the bile duct and head of Brown’s pancreas.

“What it did for me is it made me appreciate every day, made me sort of maximize every day and make sure you don’t leave anything on the table in life, with your family, with football, whatever you’re doing at that particular point,” said Brown, who also battled colon and liver cancer about a decade earlier. “It just made me focus on what’s good in your life and take advantage of everything you have in your life.”

Brown now has the task of helping Wisconsin live up to its reputation.

Wisconsin ranked eighth in the Big Ten in yards per carry (3.93) and seventh in yards rushing per game (164.6) last season. That’s a precipitous fall for a program that never finished below second in either category from 2017-19, when two-time Doak Walker Award winner Jonathan Taylor was running over opposing defenses.

These Badgers don’t have a clear-cut lead running back just yet.

Several player got carries and Berger had a team-high 301 yards rushing last season despite playing just four games and dealing with knee problems. After noticing how defenses caught on to some of Wisconsin’s tendencies last year, Berger has worked on improving his pass protection.

“I never really got in for pass protection last year, mainly runs,” Berger said. “I felt like all the teams knew when I got In, it was going to be a running play.”

Mellusi is seeking a fresh start at Wisconsin after totaling 71 carries over the last two seasons at Clemson. He believes Brown can help him take the next step.

“He’s been at the next level,” Mellusi said. “He’s coached great running backs. I just feel like he can take my game somewhere I haven’t gone yet.”

The Badgers also brought in Allen, a four-star prospect versatile enough to be recruited at multiple positions. Brown called him “one of those kids that you see every 25 years.”

“He’s a great running back,” Brown said. “He can be a great linebacker. He can be great at whatever he wants to do.”

Wisconsin’s running backs are well aware of what’s expected from them. They know this program’s tradition of producing such elite rushers as Taylor, 1999 Heisman Trophy winner Ron Dayne, Melvin Gordon and Montee Ball.

That’s part of the reason they came here.

“The history of running backs kind of speaks for itself,” Mellusi said.

Now they want to add their names to that list.