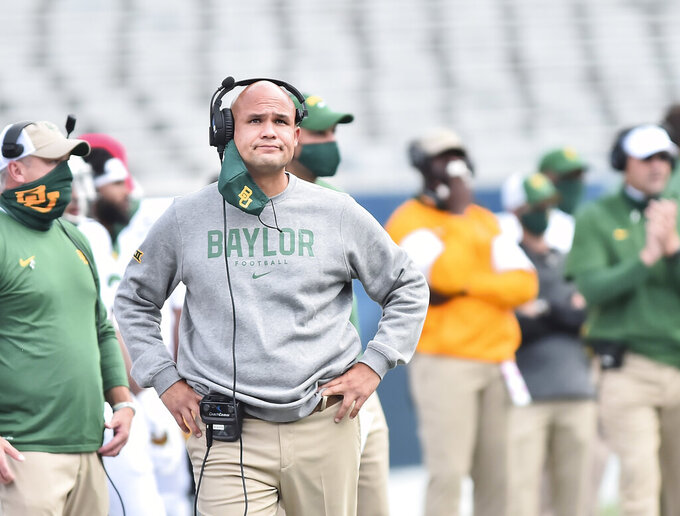 WACO, Texas (AP) — Baylor had 32 active COVID-19 cases in its athletic department in the wake of having to postpone a football game for the second time this season.

The school's weekly update came a day after the Big 12 rescheduled next Saturday's home game against No. 7 Oklahoma State to Dec. 12. Baylor's pause of football activities since last Thursday will extend through at least this week.

Of the 32 active cases, 29 student-athletes had symptoms and only three were asymptomatic. The school said 44 cases were being monitored, including close contacts.

A week earlier, the school reported 10 active cases, with six of those having symptoms.

Baylor athletic director Mack Rhoades said Sunday that the significant increase in positive COVID-19 cases led to concerns of an outbreak. He also said the increase caused a position group to fall below the minimum threshold of available players, though neither he or the school provided any specifics about that.

A hastily arranged game against former Southwest Conference foe Houston was canceled a day before it was supposed to be played on Sept. 19 because Baylor was unable to meet COVID-19 roster thresholds set by the Big 12.

Baylor (1-1) had a scheduled open date over the weekend, and its next scheduled game is Oct. 24 at Texas.