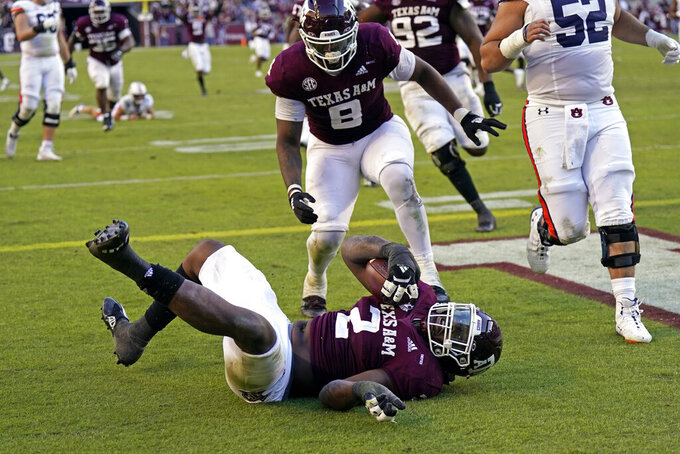 COLLEGE STATION, Texas (AP) — Micheal Clemons scored the game’s only touchdown on a 24-yard fumble return early in the fourth quarter, and No. 13 Texas A&M beat No. 12 Auburn 20-3 on Saturday.

Clemons’ scoop-and-score came after defensive tackle Jayden Peevy poked the ball away from scrambling Auburn quarterback Bo Nix. Clemons, a 6-foot-5, 270-pound defensive end, picked up the ball and sprinted to the end zone, diving to the ground after he crossed the goal line.

Zach Calzada finished 15 of 29 for 192 yards for Texas A&M (7-2, 4-2 Southeastern Conference), shaking off an apparent injury to his left, non-throwing shoulder in the third quarter. His performance was good enough for the Aggies to survive a defensive battle between the two highest-ranked two-loss teams in the country.

“He ain’t always perfect, but let me tell you what, that’s a competitor,” Fisher said. “That guy has got arm talent, he can throw the football, he can make plays, he’s a competitor, and he’s a tough guy.”

Auburn (6-3, 3-2) had its four-game winning streak in College Station snapped.

Calzada woke up the crowd of 109,835 — the second-largest in Kyle Field history — with a 49-yard completion to Caleb Chapman late in the third quarter, setting up a 29-yard field goal by Seth Small that gave the Aggies a 6-3 lead.

Small put the Aggies up 9-3 with a 47-yard field goal with 13:40 remaining before the Aggies’ defense finally found the end zone. Small connected again from 37 yards with 3:15 remaining.

Small opened the scoring midway through the first quarter on a 21-yard kick, and Auburn answered with Anders Carlson’s 32-yard field goal late in the quarter.

Both Small and Carlson missed midrange field-goal attempts that would have broken the 3-3 tie.

“I just don’t think that we found that play, that momentum, that spark to really get us — on the offensive side — going,” Auburn coach Bryan Harsin said. “We had plenty of self-inflicted wounds that we had in there — dropped passes, we lost the ball, we fumbled it. There were plenty of things that we could control that we didn’t help ourselves with.”

Texas A&M lost its first two SEC games before shocking then-No. 1 Alabama to begin a four-game winning streak. Now the Aggies are in the hunt to represent the SEC West in the conference championship game if they win out. Their remaining opponents are Ole Miss, Prairie View A&M and LSU.

“We just take it game by game, and now, we’re focused on Ole Miss,” offensive lineman Kenyon Green said. “You can’t look that far out if you can’t see it. All we see right now is Ole Miss.”

Texas A&M: The Aggies had solid rushing performances from Isaiah Spiller and Devon Achane, who had 112 and 98 yards, respectively. ... The Aggies struggled to move the chains at times due to untimely dropped passes.

Texas A&M could move up a couple spots but may not crack the top 10. Auburn will fall at least a few spots but will likely remain ranked.

“I wish he would slide. I’m going to have to get some of the Astros up here, maybe get Dusty Baker up here to teach him how to slide.” — Fisher on Calzada, who didn't slide on the rush that left him with the banged-up shoulder.

Texas A&M received good news around kickoff when Walter Nolen, a defensive lineman out of Tennessee who is considered one of the nation's top defensive prospects, committed to the Aggies. Nolen chose Texas A&M while on an unofficial visit to College Station. Fisher was asked after the game what kind of impact the win over Auburn could have for recruiting and replied, “Just watch.”