Column: Iowa St's moment a joy and all too rare in the game 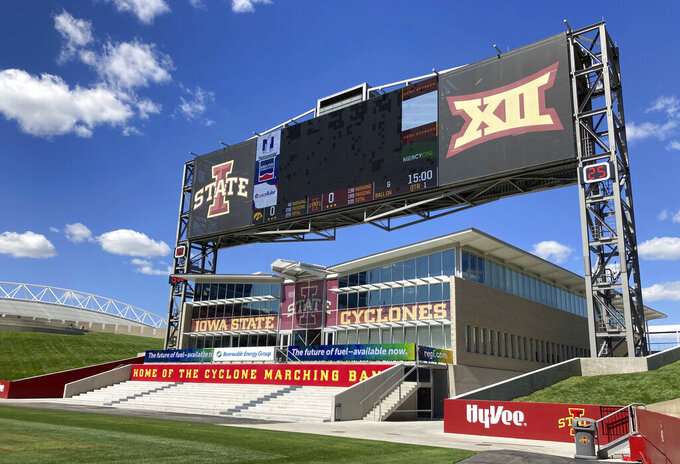 The North end zone scoreboard is shown at Jack Trice Stadium, Wednesday, Sept. 7, 2021, in Ames, Iowa. No. 9 Iowa State is preparing to play what is undeniably the biggest home game in the 129-year history of the program. The top-10 matchup with rival Iowa on Saturday drew ESPN’s popular pregame show, “College GameDay.” (AP Photo/Ralph Russo)

AMES, Iowa (AP) — Two big rigs were parked next to Reiman Plaza, the green space that leads to the south end zone entrance of Jack Trice Stadium, home to a most unlikely success story.

The trucks were delivering sound and lighting equipment to go with the stacks of metal bleachers, piles of plywood, and crates and cases containing the necessary parts to turn Iowa State into the epicenter of college football this weekend.

The Cyclones are having a moment.

No. 9 Iowa State is preparing to play what is undeniably the biggest home game in the 129-year history of the program. The top-10 matchup with rival Iowa on Saturday drew ESPN’s popular pregame show, “College GameDay,” to Reiman Plaza.

After decades of being a college football afterthought, Iowa State has reached the big time. And the looming uncertainty of conference realignment is not about to spoil this moment for the Cyclones and their supporters.

“I’m just trying to really focus on this season and this team and give them my full attention and appreciation. And the future will sort of take care of itself,” former Iowa State quarterback Sage Rosenfels said. “You just don’t have much control over it.”

Such is life in college football’s vast middle class, where the whims and wants of the sport's blue bloods shape the landscape and somewhat randomly determine the haves and havenots.

Texas and Oklahoma made the Big 12 a Power Five conference, which generated the revenue, resources and exposure that Iowa State has used to transform its football program. But in July, the Longhorns and Sooners decided they will leave Iowa State and the rest of the Big 12 behind to join the Southeastern Conference in 2025.

This has been something of a trend in college football over the last decade or so. When there is an uprising in an unusual place, the establishment tends to figure out ways to push it down.

Boise State used the BCS to raise its profile and become a national power. When the BCS was replaced by the College Football Playoff it established more clearly the Power Five conferences and their big-money schools, further marginalizing schools outside those leagues. Boise State hasn't been a national contender since.

Not long ago, there were six power conferences in major college football. The Big East held equal status with the Big Ten, Big 12, SEC, Atlantic Coast Conference and Pac-12.

Even after Miami and Virginia Tech were snatched from the Big East, its status (and the money that came with it) provided a platform for schools such as Rutgers, UConn and USF to have their moments. Eventually, the conference was poached to death by its peers.

Now the Big 12 is in danger of losing its place inside the velvet ropes — and Iowa State has been here before. During the last round of realignment, the Cyclones were among the schools in danger of being relegated to a less lucrative and prestigious conference as Texas twice flirted with the Pac-12.

Nebraska, Texas A&M, Colorado and Missouri fled the Big 12, untethering themselves from Texas.

Iowa State, along with Kansas, Kansas State, Oklahoma State, Baylor and Texas Tech, didn’t have an escape hatch. Tied to Texas and Oklahoma, it worked out well for a while. The Big 12 was paid billions for its television rights, with Oklahoma and Texas essentially funding their competition.

The Big 12 has a plan for life after Texas and Oklahoma, but it will not be as profitable and it won’t be as interesting without the chance for the remaining eight to punch above their weight class and occasionally connect.

As a member of the Big Eight and Big 12, Iowa State spent decades playing the foil to Oklahoma, Texas and Nebraska. Iowa State never came close to winning the Big Eight and is 11-91-2 against the Sooners and Longhorns; four of those victories have come in the last four seasons.

In the mid-1990s, Troy Davis had consecutive 2,000-yard rushing seasons for the Cyclones and a runner-up finish in Heisman Trophy voting. It was the highlight of two decades of futility during which Iowa State never played in a bowl game.

Former Iowa State quarterback Todd Bandhauer played on teams that won a total of nine games from 1994-98. The program was run on shoestring budgets, he said, and even getting a new pair of cleats during the season was a big ask.

Dan McCarney, an Iowa native who played for the Hawkeyes in the 1970s, took over as coach in Ames in 1995 and quickly realized the Cyclones were way behind the competition.

The Cyclones went to five bowl games in 12 seasons under McCarney, showing modest success was attainable. Under current coach Matt Campbell, the Cyclones have ripped off four straight winning season, something that hadn’t been done in Ames in a century.

“The college football landscape was totally different,” Bandhauer said. “And now there is just so much more money in college football. And Iowa State was definitely on the positive receiving end of that, being in the Big 12.”

Iowa State has spent $330 million on athletic facilities during athletic director Jamie Pollard’s 17-year tenure. The stadium now has the third-largest capacity in the Big 12 behind Texas and Oklahoma at 61,000.

That commitment helped lure Campbell to Ames in 2015. The 41-year-old Ohio native was a wunderkind at Toledo, one of the youngest coaches in FBS, and he went 35-15 at the Mid-American Conference school.

Campbell believed in Iowa State’s potential and then unlocked it.

“It’s not easy to be done. We know that,” Campbell said. “I do think as you come to the stadium, last Saturday you walk out to the field, you get this fan base back, you see the skyline has changed here. You take it in, there’s a great sense of appreciation. There is pride about being a Cyclone right now.”

Last season, Iowa State matched the school record with nine wins, reached the Big 12 title game for the first time and finished ninth in the AP Top 25, by far the Cyclones’ best ranking ever.

Almost every key player is back for the Cyclones, including preseason All-Americans Breece Hall at running back, Charlie Kolar at tight end and Mike Rose at linebacker.

College football’s economic engine is driven by the traditional powers —- Alabama and Ohio State, USC and Notre Dame, Texas and Oklahoma —- but teams such as Iowa State energize a season.

“This is what college football is about,” retired Iowa State sports information director Tom Kroeschell said.

Continued consolidation of college football around the biggest brands will make it less likely for the next Iowa State to have its moment. The sport will be worse for it.