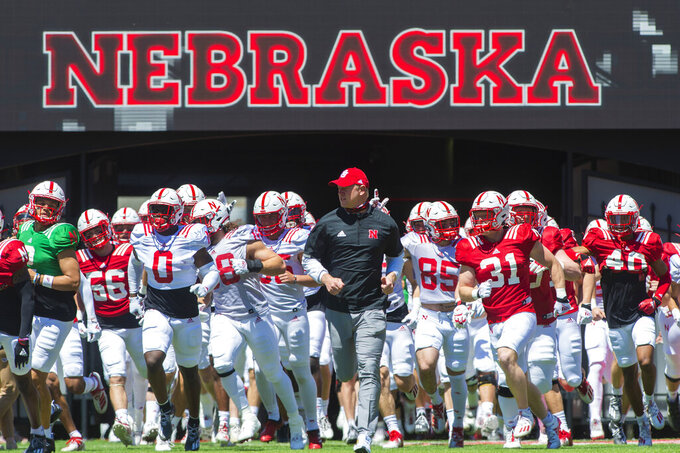 Nebraska head coach Scott Frost and the Huskers run on to the field to a sea of fans for the first time since the pandemic started before the Red-White Spring game at Memorial Stadium in Lincoln, Neb. on Saturday, May 1, 2021. (Kenneth Ferriera/Lincoln Journal Star via AP)

A company that has partnered with dozens of college athletic departments on name, image and likeness programming announced a deal with Twitter on Thursday that will allow athletes to monetize video posts on the social media platform.

In less than a month, several state laws will go into effect that will make it possible for college athletes to be paid for endorsements, sponsorship deals and personal appearances.

The NCAA also is hoping to have new rules in place by the end of June to govern all Division I athletes and NIL compensation from third parties.

Opendorse's deal with Twitter will give college athletes the opportunity to start earning money from content they create and tweet with just a few taps on a smart phone.

Blake Lawrence, the co-founder of Opendorse and a former Nebraska football player, said the deal with Twitter will ensure that college athletes align with approved advertisers and published videos are compliant with NCAA rules and various state laws.

Among the schools that have deals with Opendorse are Nebraska, Texas, Ohio State, LSU, Indiana and BYU.

"We’ve built a system that allows the activities of an NBA player to be evaluated differently from that of an NFL player," Lawrence said. “So that same approach you can bring to the collegiate space."

He said if there is a state-by-state approach to NIL legislation, the company is equipped to evaluate activities differently for an athlete in Florida, for example, as opposed to one in Mississippi.

The video athletes can monetize cannot come from the schools and broadcast partners. They must be independently produced.

“This fall when a college sports fan is scrolling through Twitter, they’re going to see a video from their favorite student-athlete and that video could be that athlete providing a postgame recap. Their thoughts on the game they just played,” Lawrence said. “The fan hits play on that video and they will see a five- to 15- to 30-second advertisement before the video plays.

The athlete will be paid based on engagement with the video and number of followers.