Cristobal's 1st fall camp at Miami set to get underway 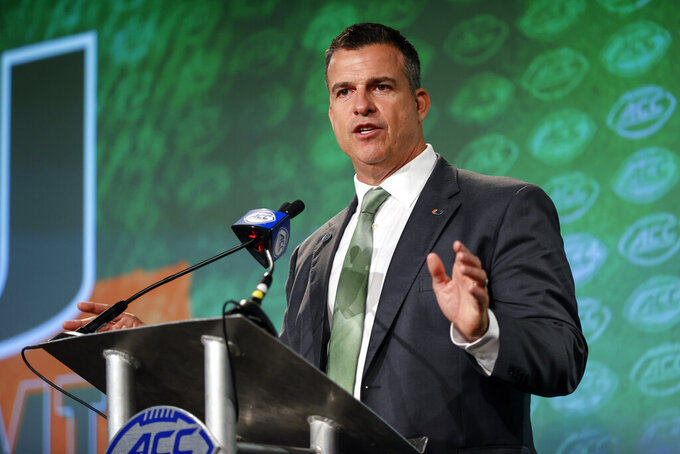 CORAL GABLES, Fla. (AP) — It is now an annual question at Miami, the official precursor to the start of a new football season for a program that was once a perennial national championship contender and hasn’t been at that level for two decades and counting.

New Hurricanes coach Mario Cristobal has an answer: “The U is back to work,” the Miami alumnus said.

That back-to-work process started the moment when the private plane that carried Cristobal home from Oregon last December landed in Miami, began picking up speed as he assembled a staff and got into spring ball and hits a new level when the first Hurricanes' preseason camp under the Miami native starts this week.

The first practice is Friday; there are a slew of acclimation activities happening over the next few days. Expectations from an impatient fan base are always high at Miami, are higher now because of Cristobal’s presence and probably rose even more when the Hurricanes were installed last week as the Atlantic Coast Conference’s Coastal Division preseason favorite.

Cristobal inherited a program that went 7-5 last season, a schedule that was cut a game short because coronavirus-related issues kept Miami from its planned Sun Bowl appearance against Washington State. Miami has one 10-win season in the last 18 years, with just one bowl win since 2006, and still hasn’t won an ACC title.

He’s the latest coach tasked with changing that. Armed with incredible job security — a 10-year deal worth around $80 million — Cristobal came back to the school where he was an offensive lineman and played for teams that won national championships in 1989 and 1991.

Those are just some of the rings he has scattered around his office. Rings from his days as head coach at Oregon and an assistant under Nick Saban at Alabama are on the table as well, a massive haul of jewelry that shows what he’s about.

“When things were changing, we were kind of all scrambling,” tight end Will Mallory said. “We didn’t know what was going to happen. Coach Cristobal came in. We were fortunate to get him. Then week by week you kind of just saw the additions that he was making. It just gets you that much more excited. I wouldn’t want to play for anyone else for my last year.”

Cristobal did not come home with the notion that getting Miami back into championship mode was going to take a few months. There’s an obvious push to win now — quarterback Tyler Van Dyke, widely presumed to be entering the 2023 NFL draft, could be one of the nation’s best this season. But Cristobal is also building for the long haul; recruiting has gone extremely well in terms of commitments, and the plans for who to pursue in future years are already underway.

His office has stacks of papers, files and notes, everything from past game plans at other schools to breakdowns of the current Miami roster to plans for the future — both for building a team and building more buildings, something that’s a top priority for the Hurricanes.

Camp Cristobal starting this week is just another of many steps on the way back, he hopes, to the top.

“When people see this, it’s like a grenade went off,” Cristobal said, looking around his office. “But I love preparation. I love planning. This is the stuff I can do all day.”