Dart, USC trying to salvage season against No. 13 BYU 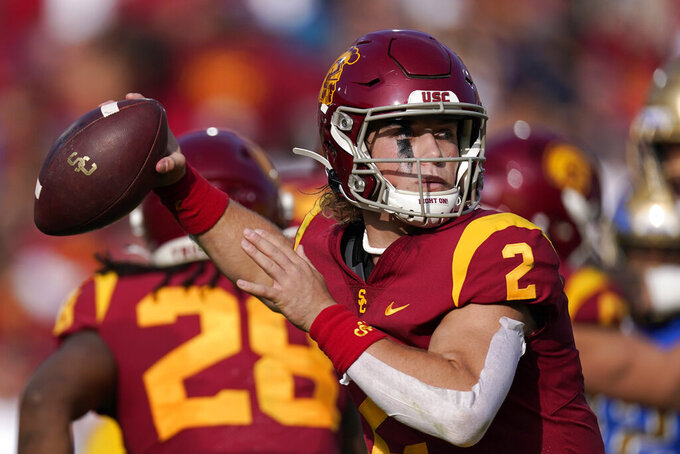 LOS ANGELES (AP) — Jaxson Dart was there when BYU upset Southern California in 2019, a recruit watching from the stands as the Cougars flustered the Trojans’ Air Raid offense by dropping eight defenders into coverage.

Now a freshman quarterback at USC, Dart will have to handle that scheme and anything else No. 13 BYU will throw at him to help salvage a disappointing, exhausting and frustrating season.

“When they drop eight, it’s not like they’re going to get a lot of pressure on me, so I’m gonna have some time and I just got to take what the defense gives me,” Dart said. “We’ll just slowly march it down the field if that’s what it takes.”

USC (4-6) didn’t have the necessary discipline to do that two years ago, with the run game getting 3.8 yards per carry and then-freshman Kedon Slovis throwing three interceptions, his last coming in overtime to seal the 30-27 win for BYU (9-2).

Slovis won’t play this time because of a leg injury, leaving Dart to make his second career start after throwing for 325 yards with one touchdown and two interceptions in a 62-33 loss to UCLA. From Kaysville, Utah, he should have a more productive rushing offense to lean on, provided senior tailback Keaontay Ingram is able to return from an upper-body injury that forced him out against the Bruins.

There also are emotional ailments for USC to be worried about. The handful of players that chose to speak to the media after the humiliating rivalry defeat referenced a lack of cohesion in the locker room. Interim coach Donte Williams had to bring the team together during practice Wednesday and chastise them for not showing enough enthusiasm.

“Coaches don’t lead teams to prominence and dominance. It has to be player-driven, and right now we need some of those leaders to continue to step up,” Williams said.

There are no such issues at BYU, which can win 10 regular-season games for the second straight year.

“It would mean a lot. Like a 10-2 season, shoot, I would go crazy,” Cougars defensive back Malik Moore said. “Get us a good little bowl game, hopefully a New Year’s Six.”

The best football in the Pac-12 is being played in Utah this season, with BYU holding a 4-0 record against the conference. That includes victories over Pac-12 South winner Utah, who will play in the conference championship game next Friday, and Washington State, who would be the Utes’ opponent in Las Vegas with a win over Washington in the Apple Cup and an Oregon loss to Oregon State.

A trip to the postseason is still possible for USC, but there is no margin for error. They must beat BYU and California next Saturday in a game that was rescheduled because of a COVID-19 outbreak among the Golden Bears to avoid a second losing season in four years.

“We have some seniors on this team, and we want to put it all on the line for them. I would just say end this year off in a really good way and help us carry it into next year,” Dart said.

USC is 1-4 in its past five home games, having allowed 34 or more points in each of them. However, BYU coach Kalani Sitake insists his team isn’t taking anything for granted, largely because of his familiarity with Dart. The Cougars were one of the first FBS schools to offer Dart a scholarship.

“Knowing that kid and being around him, he will be ready for this game. I’m looking forward to seeing him and wishing him the best in every game, except this one,” Sitake said.

Drops have been a problem for USC’s pass catchers all season long, much to the bewilderment of players and coaches alike. Those issues popped up again at the wrong times against UCLA, costing the team points and momentum when they were still in the game. Sophomore receiver Gary Bryant Jr. attributed those struggles to a lack of focus.

“It’s an issue with us. It’s not the throws or anything like that,” Bryant said. “I can speak for myself, me not putting my eyes on the ball, the ones I did drop this year.”