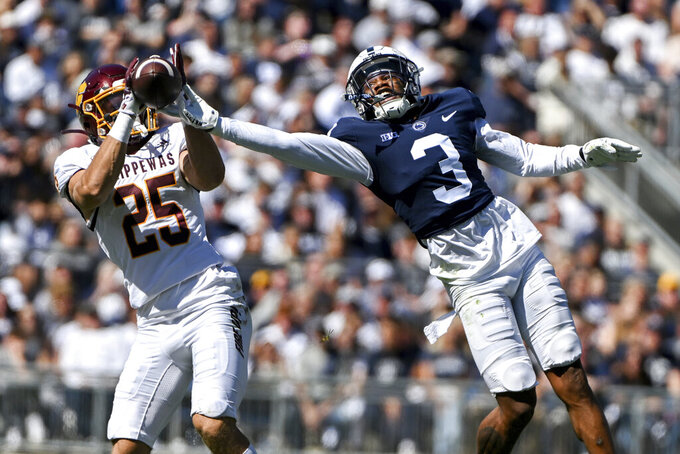 Penn State's fast, physical defense can attack from all angles and is designed to take the ball back.

“I think that’s a big part of what Manny wants the identity of this defense to be and I see it getting closer to how we want it and how he wants it to look,” coach James Franklin said Tuesday. “Which is turnovers, sacks and tackles for loss.”

The No. 11 Nittany Lions (4-0, 1-0 Big Ten) have created a strong defensive foundation as they prepare for conference play with Northwestern (1-3, 1-0) visiting on Saturday.

Although Penn State is outside the top 20 in scoring, rushing and passing defense, Diaz’s group has made a difference with big plays.

So far, nearly 30 players have rotated in and out of a unit that’s fourth nationally in turnover margin at plus-8. Diaz’s defense has recovered five fumbles and picked off four passes and the Nittany Lions lead the country with 41 pass breakups, 16 more than second-place Illinois.

“We have size, speed and experience, where sometimes you may have a combination of those traits but not all of them,” Franklin said.

It allows Diaz to get creative, and he’s called linebacker, cornerback and safety blitzes in each game.

While Porter has been a star in coverage, fellow cornerback Johnny Dixon has emerged as a crafty blitzer. Whether playing in tight or pushed out past the hashmarks, Dixon's speed and pre-snap deceptiveness has resulted in two sacks. Hard-hitting safety Ji’Ayir Brown also has a sack and the defensive backs combined have six quarterback hurries.

The push from the players who rotate in and out of the secondary has helped a young defensive line establish its own rotation.

Starter Adisa Isaac, who was expected to be a playmaker before missing last season with an ankle injury, has started to come on. Meanwhile, freshman Dani Dennis-Sutton has taken advantage of extra playing time and leads the team with three sacks. Sophomore end Chop Robinson has one.

“We can roll guys,” Isaac said. “And that’s when we play our best, when we can have guys rolling in that’s going to have no drop-off and play to the standard we know we can play.”

Penn State is swapping seven linebackers and 11 defensive linemen in and out of its front seven. Although they’re allowing 367 yards per game, the Nittany Lions are stiffening up when they need to.

They’ve allowed just one touchdown of 20 or more yards, a 22-yard pass from Auburn when Penn State led 31-6.

“Those are the ones that kill you,” Franklin said. “If you’re not giving up explosive plays for touchdowns and you’re playing good red-zone defense, then once again you have a chance to be pretty good in the stat that matters most, which is scoring defense.”

Middle linebacker Tyler Elsdon thought back to team’s grueling summer workouts when asked about being on the field for long sequences.

Penn State has faced 10 drives of 10 or more plays. Just two of them have ended in touchdowns. The other eight? Three field goals, two interceptions, two turnovers on downs and a fumble recovery.

“Continually being fresh is huge,” Elsdon said. “There’s times, yeah, maybe they got a big play, they got a first down. It’s really just settling down, setting your feet and taking a deep breath.”