East vs West: No. 4 Georgia hosts No. 7 Auburn in SEC tilt 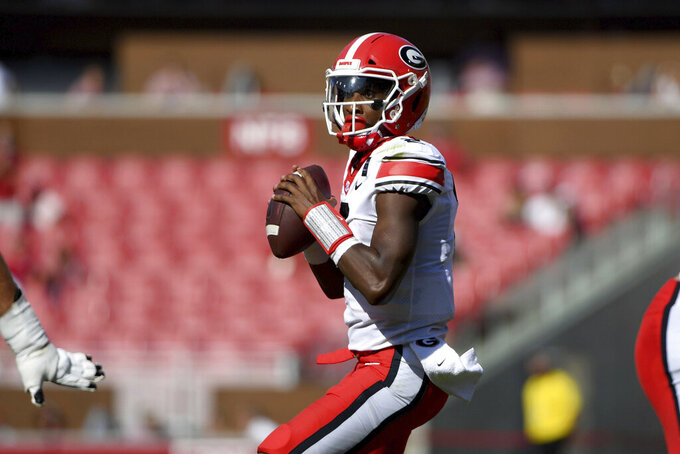 Georgia quarterback D'Wan Mathis drops back to pass against during the first half of the team's NCAA college football game against Arkansas in Fayetteville, Ark., Saturday, Sept. 26, 2020. (AP Photo/Michael Woods)

Here are things to watch in Week 2 in the Southeastern Conference:

No. 7 Auburn at No. 4 Georgia: Two of the SEC’s four top-10 teams meet in an interdivisional matchup in prime time. Both overcame challenges to win their openers, with Georgia rallying for 32 unanswered points with two passing touchdowns by backup quarterback Stetson Bennett to beat Arkansas 37-10. Bulldogs coach Kirby Smart now must choose between Bennett, initial starter D’Wan Mathis and newly-cleared JT Daniels behind center. Auburn battled then-No. 23 Kentucky for three quarters before pulling away in the fourth for a 29-13 win behind two of Bo Nix's three passing touchdowns. Georgia has won six of seven against the Tigers. No. 2 Alabama also hosts No. 13 Texas A&M in another Top-25 matchup.

Alabama QB Mac Jones vs. Texas A&M’s pass defense. Jones threw for 249 yards and two touchdowns in just under three quarters to lead the No. 2 Crimson Tide past Missouri, but faces a bigger and longer challenge beating the SEC’s best unit against the pass. The No. 13 Aggies held Vanderbilt to just 150 yards passing and registered two interceptions, including one in the fourth quarter, to preserve a narrow win. But A&M faces a tall task with Alabama's QB and talented receivers looking to follow up a strong opening.

Kylin Hill set a Mississippi State receiving record for a running back with 158 yards in the victory at LSU, including 155 after the catch. The SEC’s No. 3 rusher last season added 34 yards on seven carries to lead a Bulldogs effort that totaled just nine on the ground. MSU just didn't need to run that much with Hill among three receivers surpassing 100 yards on a record day.

Mississippi and first-year coach Lane Kiffin visit Kentucky as a 7-point underdog, but the Rebels are coming off a 613-yard performance against No. 3 Florida in a 51-35 loss. The Wildcats outgained Auburn and played the Tigers tough for three quarters before the game slipped away in the fourth. Ole Miss proved it can erase a deficit on its last trip to Lexington in 2017; the Rebels overcame a 27-17 second-half hole to win 38-37 on a short TD pass with five seconds remaining.

Mississippi State quarterback K.J. Costello introduced first-year coach Mike Leach’s Air Raid offense in impressive fashion as he passed for a SEC-record 623 yards and five TDs in the Bulldogs’ 44-34 upset of defending national champion and No. 6 LSU last week. The Stanford transfer broke school marks for attempts (60) and completions (36) along with compiling the 11th-best, single-game yardage total in FBS. The fifth-year senior was named SEC Offensive Player of the Week.