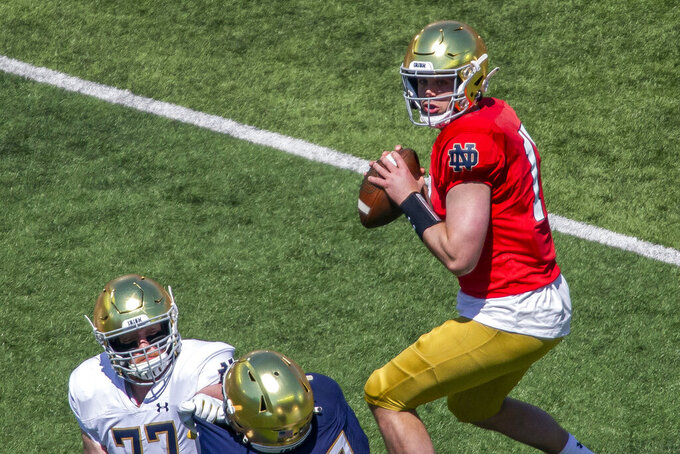 TALLAHASSEE, Fla. (AP) — Dillan Gibbons is back in the Sunshine State and the Florida State offensive lineman will be reunited with not just family when the Seminoles take on No. 9 Notre Dame but a large a number of old friends from Indiana as well.

The Clearwater, Florida, native will be making his first start for the Seminoles following his transfer this summer from Notre Dame. So Gibbons — who played in 29 games and started against Syracuse in 2020 for Notre Dame — will line up Sunday night against some former teammates along the Fighting Irish’s defensive line.

“I’ve gone against those guys for thousands of reps,” Gibbons said. “Some of those guys are my best friends in the world and they always will be. I’m probably going to have to ruin a few friendships but I’m excited to get after it.”

It also will be the first Florida State game for the majority of the nine transfers that coach Mike Norvell brought in for the 2021 season. In addition to Gibbons, that group includes quarterback McKenzie Milton (UCF), defensive ends Jermaine Johnson (Georgia) and Keir Thomas (South Carolina), and wide receiver Andrew Parchment (Kansas).

Notre Dame will feature a couple of notable transfers as well, quarterback Jack Coan (from Wisconsin) and AP preseason All-American guard Cain Madden (from Marshall), who were brought in to strengthen the offense.

How the transfers on both sides perform will likely go a long way toward determining the outcome on Sunday.

Madden is an exceptional plug-and-play piece to a Notre Dame offensive line that has reloaded after seeing three linemen selected in NFL draft. The Fighting Irish will run behind that line, using a trio of backs in Kyren Williams (1,125 yards and 13 touchdowns as a freshman) along with Chris Tyree and C’Bo Flemister.

“We’re gonna have to run the football, there’s no doubt,” Notre Dame coach Brian Kelly said. “Balance to me has always been about, if you’re in a position to run it, you better be good at it. But defined to me is about scoring points and scoring more is going to be having an effective and efficient running game.”

Some other things to look in Sunday night’s matchup:

Florida State will honor coaching great Bobby Bowden, who died at 91 of pancreatic cancer on Aug. 8, by wearing a back helmet bumper with Bowden’s signature. The coaching staff’s polo shirts will have a Bowden patch on a sleeve. The “Bobby” signature and his trademark straw hat will also be painted on each 25-yard line. Bowden won national titles in 1993 and ’99 during his 34 years as Florida State’s head coach.

Due to pandemic protocols in 2020, crowds were limited to roughly 25% of Doak Campbell Stadium’s 79,560-fan capacity. Sunday’s game is not a sellout but it’s expected to be an energized crowd. Players are looking forward to the return of a typical game-day atmosphere.

“We’re just ready to get back to some sort of normalcy because we haven’t seen that the past two years,” Notre Dame safety Kyle Hamilton said. “The guys are ready to get out there before an away crowd, which wants us to lose and it’s an environment we haven’t felt in a while.”

McKenzie Milton has not played football since suffering a traumatic leg injury in November 2018 while playing at UCF. Milton is listed as a co-starter on the Florida State depth chart, although coach Mike Norvell hasn’t given an indication as to whether Milton will start or if he could be used in some role to complement Jordan Travis.

Coan has been praised for his accuracy in the pocket as well as leadership. Kelly sees two other key attributes in a starting quarterback.

“Poise would be probably the first one,” Kelly said. “Decisive. We’re not starting a freshman. We’re starting a guy that’s played this game. We want him to be poised, but we want him to be decisive. He’s seen it and knows what it looks like.”

Florida State lineman Dillan Gibbons will have a good friend in the stands, Timothy Donovan. He was born with VACTERL (a nonrandom association of birth defects). Through his GoFundMe campaign that went viral in July — the first day NCAA athletes could use the new name, image and likeness legislation — Gibbons organized an effort to bring Timothy and his family to Tallahassee.

Florida State and Notre Dame fans, as well as others around the nation, contributed more than $50,000 to not only help make the trip a reality but to help Timothy’s parents, Tim and Paula, with the care their son needs.

Gibbons wants the weekend to feel like an official visit for Donovan, who is a Notre Dame fan. “I just want it to be his day in the sun," Gibbons said. “I’m trying to share his story to as many people as possible. There’s all kinds of nice events planned.”