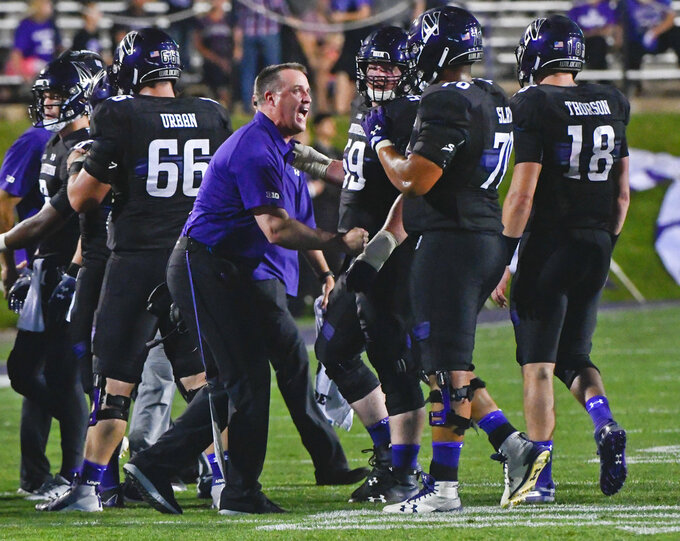 EVANSTON, Ill. (AP) — As a coach leading his alma mater, Northwestern's Pat Fitzgerald can imagine what this season has been like for Nebraska's Scott Frost.

A win against Northwestern sure would be meaningful, considering the Cornhuskers come into their game Saturday still seeking their first victory under Frost.

The quarterback who grew up in the state and led Nebraska (0-5, 0-3 Big Ten) to a share of the national championship in 1997 returned home after orchestrating a turnaround in two seasons at Central Florida. The Knights went from 0-12 the year before he arrived to 13-0 in 2017.

Frost's return to Nebraska was widely hailed in a state passionate about its storied program. But the once-proud Cornhuskers have dropped nine straight games for the first time in their 129-year history.

"There's no question, we got better (last) week," Frost said. "I think the attitude got better, the practice got better and the performance was better."

But the outcome against Wisconsin last week was all too familiar.

The Cornhuskers got run over by Jonathan Taylor for 221 yards and three scores in a 41-24 loss. Nebraska ranks among the worst in the nation on defense with injured nose tackle Mick Stoltenberg missing and a banged up group of linebackers. The Cornhuskers are committing more penalties per game (10.4) than all but one team — Kent State — and have allowed opponents to convert 41 percent of their third downs.

Northwestern quarterback Clayton Thorson threw for 373 yards and matched a career high with three touchdown passes in the win over Michigan State. He also took every snap for the second straight game. The school's winningest quarterback and leader in touchdown passes, Thorson split time with backup TJ Green the first three games while working his way back from a torn anterior cruciate ligament in his right knee.

Though he's 0-4 as a starter, Nebraska's Adrian Martinez looks like he could be Frost's next standout quarterback. Martinez set freshman records last week with 384 yards passing and 441 of total offense. It was his second straight game with more than 400 yards in total offense. Frost has worked with some of college football's best quarterbacks in recent years, including 2014 Heisman Trophy winner Marcus Mariota as Oregon's offensive coordinator.

Fitzgerald said the Wildcats will go with a committee until someone steps up to replace Jeremy Larkin as the lead running back. Larkin ran for 346 yards through the first three games in his first season as the top ball-carrier, then was forced to stop playing football because of a condition that causes narrowing of the spinal canal in the neck and upper back. The Wildcats haven't gotten much going on the ground in the two games since then, running for 28 yards against Michigan on Sept. 29 and eight against Michigan State last week.

HOME ON THE ROAD

Visiting teams tend to fare well when Nebraska and Northwestern meet. The Cornhuskers are 3-0 in Evanston since joining the Big Ten in 2011. Northwestern has won three of the past four at Nebraska.