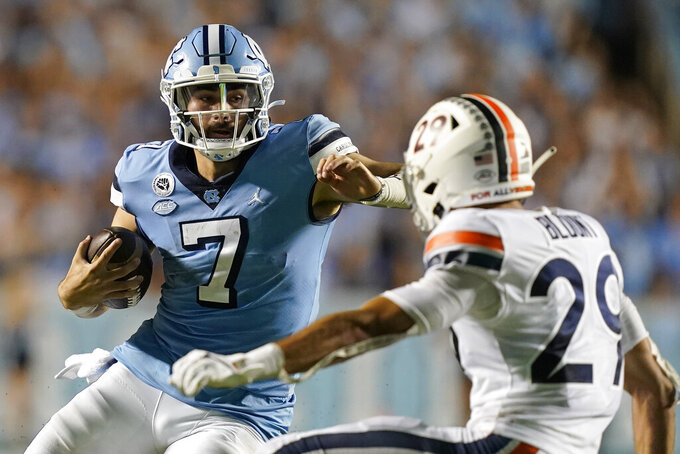 Line: North Carolina by 12 1/2, according to FanDuel Sportsbook.

After a season-opening loss to Virginia Tech, North Carolina must keep winning its ACC Coastal Division games to have a shot at reaching the league championship game. Georgia Tech is desperate for anything approaching a signature win in coach Geoff Collins' third season. If the Yellow Jackets can knock off the Tar Heels on the big stage of Mercedes-Benz Stadium, it might signal the program has finally turned the corner.

North Carolina QB Sam Howell vs. Georgia Tech's secondary. Howell threw for five touchdowns (in addition to rushing for a career-best 112 yards) in a 59-39 victory over Virginia last weekend. He'll be facing a team that leads the ACC and ranks fifth in the FBS in passing yards allowed (124.3 per game). The Yellow Jackets are coming off a stellar defensive performance in a 14-8 loss at Clemson, limiting the Tigers to 284 yards in total offense.

North Carolina WR Josh Downs. The sophomore has helped fill the void after Dyami Brown and Dazz Newsome were lost to the NFL draft. Downs had eight catches in each of the Tar Heels' first three games and ranks among the FBS leaders in receiving yards per game (133.0, fourth), catches per game (seventh) and TD receptions (four, tied for fourth). He’s coming off a 203-yard, two-TD performance against the Cavaliers.

Georgia Tech QB: Who will get the start? Jeff Sims, a standout performer as a freshman in 2020, left the season opener with an injury and hasn't played since. Jordan Yates started the last two games and has completed 65.3% of his passes for 592 yards, with five touchdowns and one interception.

Georgia Tech is playing the first of six games in six years at 71,000-seat Mercedes-Benz Stadium, located about a mile from its midtown Atlanta campus. ... North Carolina is coming off a huge offensive performance. The Tar Heels had 699 yards against Virginia for the sixth-highest total in program history, including 392 on the ground. … RB Jahmyr Gibbs leads Georgia Tech in rushing (185 yards), kickoff return average (26.0, which leads the ACC) and all-purpose yards (367, fifth in the league). ... North Carolina RB Ty Chandler, a graduate transfer from Tennessee, had a career-high 198 yards rushing with two touchdowns last week.