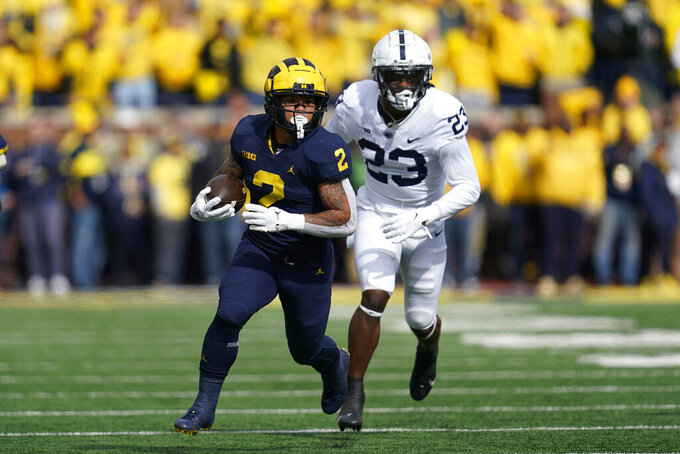 Corum was getting his first glance at a graphic that showed how he stacks up — very well, by the way — with Heisman Trophy-winning running backs Derrick Henry, Mark Ingram and Reggie Bush this century.

“I have a chance," Corum said this week in an interview with The Associated Press. “Those are some great backs. Honestly, just being up with those guys is an honor whether I get a chance to go (to New York) or even get a chance to win it."

Corum's next opportunity to boost his case of being voted college football's most oustanding player will be Saturday, when the third-ranked Wolverines (9-0, 6-0 Big Ten, No. 3 CFP) play Nebraska (3-6, 2-4) at the Big House.

“I would bet my truck that Blake Corum is on pace, or ahead of many of those running backs that have won that Heisman Trophy," coach Jim Harbagh said.

If anyone takes Harbaugh up on the wager, he would keep his ride.

Corum has run for 1,187 yards and has 17 touchdowns, trailing only Henry's rushing total through nine games for Alabama in 2015 and equaling his scoring among the three running backs to win the Heisman since 2000.

Alabama's Ingram was the Heisman winner in 2009 and Southern California's Bush in 2005, though Bush had his taken away because of NCAA violations stemming from him and his family receiving impermissible benefits while he was still in school.

For a third straight week, the Cornhuskers will try to defend a standout running back. Minnesota's Mohamed Ibrahimran ran for 128 yards and two touchdowns last week in a victory, one game after Chase Brown had 149 yards rushing and scored twice in a win for then-No. 17 Illinois.

“If you watch the film, (Corum) runs low to the ground, he runs with violence," Nebraska interim coach Mickey Joseph said. “And then he has a really good burst. So when he sees it, he busts through the hole.”

Nebraska is listed as a 30 1/2-point underdog, according to FanDuel Sportsbook. The Cornhuskers haven’t been as big an underdog since they were getting 29 1/2 points at Oklahoma in 2004, according to the OddsShark database, and they lost that game 30-3.

“We’re not going to back down and say, `Oh, we’re going to throw the towel in,'" said Joseph, who is 2-4 since replacing Scott Frost, who was fired in September after a 1-2 start with a 16-31 record in four-plus seasons. “These kids won’t do that. These coaches won’t do that.”

The Wolverines are off to their best start since 2016, when they lost their 10th game at Iowa in Harbaugh’s second season, and are 21-2 since the pandemic-shortened season in 2020

Nebraska quarterback Casey Thompson will sit out a second straight game with an elbow nerve injury that causes numbness in his right (throwing) hand. Chubba Purdy started last week against the Gophers and split time in the second half with Logan Smothers. Joseph did not name a starter during his Thursday media availability.

Wolverines defensive back Gemon Green did not play at Rutgers after traveling with the team and warming up. Green came away with a concussion among other injuries, according to an attorney he retained, after being hit by at least one Michigan State player during the melee on Oct. 29 in the Michigan Stadium tunnel.

Nebraska has lost 20 straight games against Top 25 opponents since beating then-No. 22 Oregon in 2016, and hasn't knocked off a top-five opponent since then-No. 2 Oklahoma in 2001.