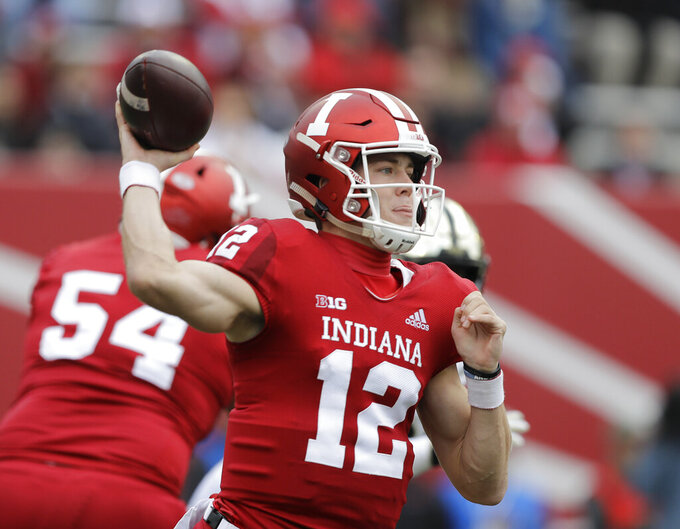 FILE - In this Nov. 24, 2018, file photo, Indiana quarterback Peyton Ramsey throws during the first half of an NCAA college football game against Purdue, in Bloomington, Ind. Ramsey learned one key lesson from the two previous quarterback competitions at Indiana: Forget the comparisons.(AP Photo/Darron Cummings, File)

Now the Hoosiers incumbent starter plans to take advantage of his experience.

"The first couple of years, I'd go back and as I was watching film, I'd think and compare and contrast," Ramsey said Thursday. "Now that I'm older, I realize what matters most is my approach and being consistent out there because that's what the coaches want to see."

As a stressed-out redshirt freshman in 2017, Ramsey finished second to Richard Lagow coming out of camp, then relieved Lagow in Week 4. Ramsey kept the job for four more games before he suffered a season-ending knee injury.

Now, he's about to embark on a new duel with Penix and Jack Tuttle, a redshirt freshman who transferred from Utah in the spring. The NCAA granted Tuttle a waiver, making him eligible immediately.

Again, Ramsey appears to have the inside track.

"He's a returning starter, and I think there's a lot of merit in that, and he's earned it," coach Tom Allen said, explaining Ramsey would begin Friday's first practice with the starting offense. "I think there's a level, when you put yourself in that position like he has in the past, and he earned a chance to be a starter two years ago and did it last year, as well. So to me, reward him for that."

Penix looked like he might take over from Ramsey last October until he tore the anterior cruciate ligament against Penn State. Penix did limited work in the spring and still has not taken his first hit since having knee surgery.

Tuttle, meanwhile, missed the spring game with a short-term illness and can't wait to show what he can do when all three contestants are on the field together for the first time.

"I love lifting and I love running and I love practicing," Tuttle said at the Hoosiers' annual media day. "I'm just super excited for the season because I missed a little time last season and I'm just really eager to get going."

Since Indiana's spring game, the coaches have not been allowed to see their players work out on the field because of NCAA restrictions. And although they have met with the players, they have yet to really see what they can do.

So Allen has changed his practice routine. The plan is to let the three or four players on the depth chart take more practice snaps in hopes of creating a deeper, stronger roster — a move that could help Tuttle and Penix make stronger cases to supplant Ramsey.

The questions about Ramsey center primarily on whether he has the arm strength to stretch the field.

While Ramsey acknowledges he might not beat Penix and Tuttle in a long-distance competition, he does have more starts, more game tape, more experience working with the receivers and running backs at Indiana, and a stronger understanding of what he must do to win the starting job for the Aug. 31 opener against Ball State at Lucas Oil Stadium.