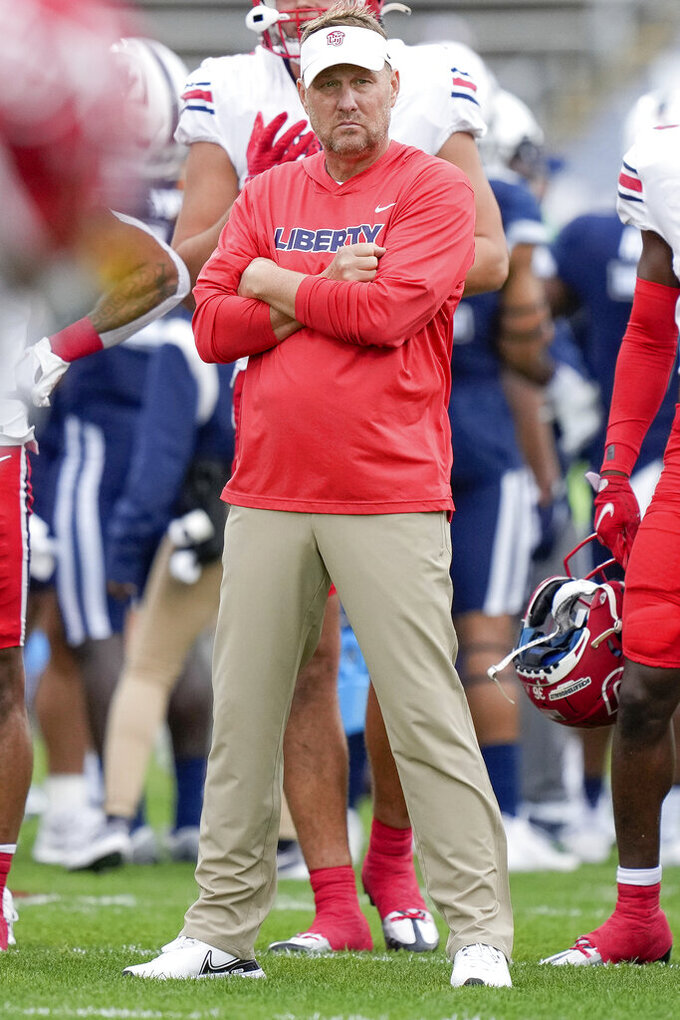 AUBURN, Ala. (AP) — Hugh Freeze's checkered past in the Southeastern Conference means he'll have to win more than just games. He'll also have to win over Auburn fans.

Freeze's return to the league more than five years after his scandal-plagued exit was greeted by considerable backlash on social media from wary fans. The former Mississippi and Liberty coach had to talk about his past during Tuesday's introductory news conference as much as his belief that Auburn can make a quick turnaround, urging fans to “please give me a chance to earn your trust.”

"Give me some time. Get to know us. Get to know our family. Get to know the truth of our story," Freeze said. "And I think the ones who have done that have said, ‘Man, you know what, I kinda like this guy and this family.’

“But that’s all you can ask is, man, give us a chance to earn your trust and I think you’ll like the end result.”

His message clearly resonated with athletic director John Cohen. Now he has to win over fans tired of embarrassments, including the failed 21-game tenure of former coach Bryan Harsin.

Auburn gave Freeze a six-year contract worth at least $6.5 million annually, making him the eighth-highest paid coach in the SEC. The buyout, if Freeze is fired without cause, would be 75% of his remaining contract.

Freeze resigned from Ole Miss in the summer of 2017 after school officials uncovered a “pattern of personal misconduct” starting with a call to a number used by an escort service from a university-issued cellphone. The program ultimately landed on NCAA probation for 21 violations of academic, booster and recruiting misconduct mostly under Freeze's watch.

Still Cohen, who was at Mississippi State at the time, said Freeze was his top choice from the outset.

“Coach Freeze was completely transparent about his past transgressions,” Cohen said. "He showed remorse, and he’s had an accountability plan that he’s used for the last five-plus years.

“Everything he disclosed to us turned out to be accurate, after speaking with credible industry sources. In this way, Coach Freeze was honest and truthful.”

Freeze’s hiring was delayed after a former Liberty student emailed Auburn officials about a direct message the coach had sent her defending the Flames athletic director after she had made critical comments. The woman said she was sexually assaulted at Liberty and had reached a settlement, a case that pre-dated Freeze’s arrival.

Cohen did not take questions from reporters at the news conference and later declined to comment when asked about the direct message by The Associated Press.

Freeze has gone 103-47 on the field in 13 seasons at four programs, but 27 of those wins at Ole Miss were vacated because of NCAA violations. He spent the last four seasons at Liberty.

Freeze's first move was to keep Carnell Williams on staff as running backs coach and associate head coach. Williams, a former Auburn All-America running back, was interim coach for the final four games.

He was a candidate for the head job, interviewing with Cohen about a week ago. Williams expressed his support of Freeze.

“I did have the opportunity to state my case, but look, that’s old news,” said Williams, who attended the news conference. “Like I told them whenever they brought me the news, honestly, they looked more disappointed than me. They were, ‘I’m sorry.’ But I’m like, I’m disappointed, (but) I’m not upset.”

Freeze isn't the first high-profile coach with NCAA baggage that Auburn has hired. Bruce Pearl was hired while in the final months of a show-cause penalty stemming from violations that led to his ouster from Tennessee.

Pearl has turned the program into an SEC power, but not without more trouble.

Now, Freeze is getting his own second chance to change the script in the SEC.

“I don’t know if rewriting the story is exactly the right word,” he said. “But it’s going to make for a good ending.”