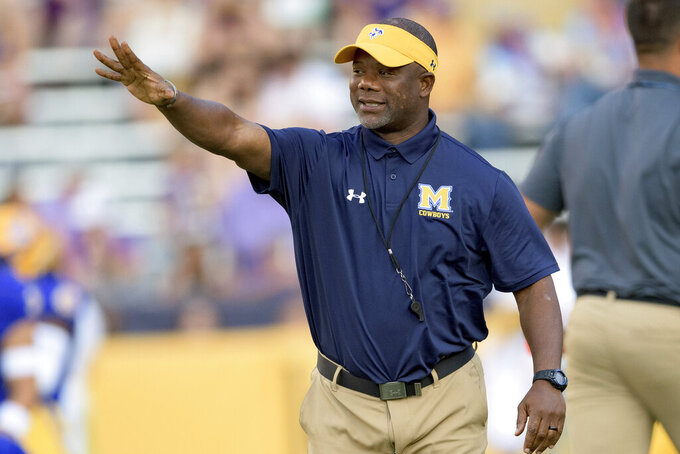 BATON ROUGE, La. (AP) — LSU coach Ed Orgeron was happy to get his first victory of the season, but still knows there is plenty of work to do.

“Not good enough offensively,” Orgeron said. “It starts with protection; we must protect the quarterback better. We have to continue to improve and hopefully we will get better when we get some of our linemen back.”

After sputtering last week in a season-opening loss to UCLA, the LSU (1-1) offense still struggled against McNeese, gaining just 262 yards of total offense through the first three quarters and scoring just 24 points on an FCS opponent.

“I’m a little surprised with how much we have struggled (offensively) these first two weeks,” Orgeron said. “We want to get our athletes in space; but right now the protection is preventing it from working. If we can’t protect the quarterback; it isn’t going to work.”

Taking advantage of McNeese’s (0-2) lack of depth, LSU pulled away with 10 points in the final quarter.

“We weren’t in a good mood coming back from Los Angeles,” Orgeron said. “It didn’t matter who our opponent was this week; we focused on LSU getting better.”

The LSU defense, however, bounced back with a stellar performance, allowing a single score on the night when senior quarterback Cody Orgeron found Carlo Williams for a 44-yard touchdown late in the fourth quarter.

“I was very pleased with how we played defensively,” Orgeron said. “Particularly with our pass rush.”

Converting a pair of fourth down conversions, LSU (1-1) scored on its first possession of the game, when Johnson hit Trey Palmer for a 19-yard score.

In just his fourth start for the Tigers, Johnson finished 18 of 27 for 161 yards. Two of Johnson’s touchdowns went to sophomore Kayshon Boutte, who finished with five catches for 31 yards.

Up 14-0 late in the first half, a 55-yard field goal by junior Cade York sent LSU to the half up 17-0. York later broke his own Tiger Stadium record with a 56-yard field goal to start the fourth quarter, extending the LSU lead to 27-0.

Leading 7-0 nearly halfway through the second quarter and with McNeese on its own 32-yard line, defensive tackle Jaquelin Roy forced and recovered a fumble by Stephen Huderson to give LSU the ball deep in Cowboys territory.

On the ensuing play, Tyrion Davis-Price went 21 yards and two plays later Johnson found Boutte for a three-yard touchdown, making it a 14-0 contest.

LSU: The Tiger offense continued to struggle, with only 166 total yards in the first half against their FCS opponent, but took advantage of a Cowboy turnover to push its lead to 17-0 at the half.

McNeese: The Cowboys hung with LSU early, trailing by only a touchdown midway through the first half before giving up 10 points in the final 6:58 of the second quarter

McNeese: Remains on the road again in Baton Rouge to play Southern University on Saturday.