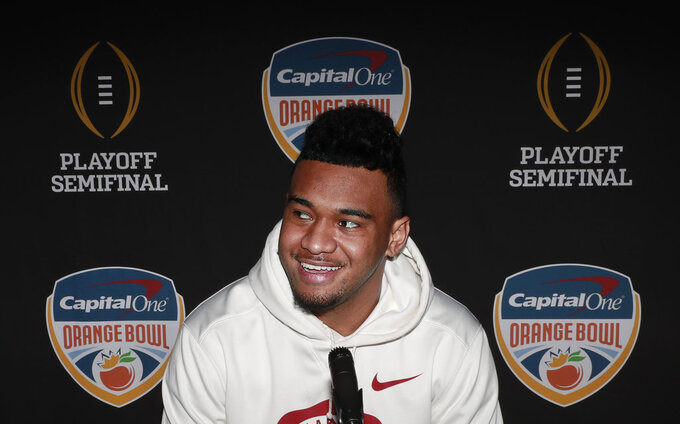 The Latest on media days for the College Football Playoff semifinals (all times EST):

Clemson defensive tackle Dexter Lawrence will not play against No. 3 Notre Dame in the Cotton Bowl after the NCAA confirmed a suspension for a failed test for performance-enhancing drugs, possibly ending the highly touted junior's college career.

Lawrence was one of three Clemson players who tested positive for ostarine, a substance used to treat osteoporosis that can act like an anabolic steroid.

Earlier Thursday, Lawrence took part in Clemson's College Football Playoff media day session and said he has no idea what may have led to the failed test. Clemson was holding out hope additional testing by the NCAA would lead to the suspension being lifted.

But in a statement, Clemson athletic director Dan Radakovich says the NCAA confirmed the suspensions of Lawrence and two reserves

It seems like Hunter Renfrow has been at Clemson long enough to have tenure at the university.

"I feel like I've been here forever," Renfrow said at Cotton Bowl media day on Thursday. "I've been here a long time and it feels like it. I'm looking forward to finishing well and moving on."

Renfrow is a fifth-year senior an former walk-on who has turned into a significant contributor on four College Football Playoff teams.

He caught two touchdowns in the Tigers' first national championship game against Alabama, and two more when Clemson beat the Crimson Tide to win the 2016 title.

Renfrow scored the game-winning touchdown in the '16 title game on play Alabama fans still think should have been flagged for offensive interference.

He says the rub route near the goal line "was a defensive pass on our guy on the outside."

Renfrow was awarded the Burlsworth Trophy this season, given to the nation's top player who started his career is a walk-on. Now Clemson coach Dabo Swinney is talking about Renfrow's NFL future.

Oklahoma was going to practice on Thursday at a South Florida high school field.

Instead, the Sooners are going indoors — to the bubble that is part of Nick Saban's legacy with the Miami Dolphins.

With wind and perhaps some rain in the forecast, the Sooners were seeking an indoor facility to practice Thursday. So they moved to the Dolphins' home, a bubble that was built at Saban's request during his two-year stint coaching that team.

Oklahoma has also practiced at Florida Atlantic on this trip to South Florida. FAU is coached by Lane Kiffin, who was Saban's offensive coordinator with the Tide before coming to Boca Raton.

Oklahoma quarterback and Heisman Trophy winner Kyler Murray has no doubt he will play Saturday, despite being slowed by an illness in recent days.

Murray appeared at Orange Bowl media day Thursday, still coughing and sniffling a bit. He has not missed any practice time but was absent from his scheduled media availability on Wednesday because the illness popped up.

Murray says he's feeling fine, and that he's surprised it took him so long to get sick after his hectic December schedule of travel and other responsibilities. He says he started feeling under the weather earlier this week, and says he's doing all he can to be 100 percent by kickoff of the game against Alabama on Saturday night.

Notre Dame coach Brian Kelly says quarterback Brandon Wimbush has taken the steps necessary to transfer after this season, but no final decision has been made.

At Notre Dame's Cotton Bowl media day session on Thursday Wimbush declined to talk about specifics, saying he was focused on preparing for the Fighting Irish's game against Clemson on Saturday.

Wimbush did acknowledge he has decisions to make about his future and would make them with his family after the season.

Kelly says he and the senior quarterback have had two conversations the coach called "preliminary in nature."

Kelly says Wimbush has submitted the paperwork necessary for his name to appear in the NCAA's transfer database. Once in the database, Wimbush can have contact with other schools. Kelly says taking the step would allow Wimbush to make a decision on transferring quickly after the season.

Wimbush was Notre Dame's starter last season and for the first three games of this season before losing the job to Ian Book. Wimbush would be a graduate transfer next season and immediately eligible to play at a new school.

Alabama coach Nick Saban says three players suspended this week will not play the rest of this season, adding that their status beyond that is uncertain.

At media day for the game Thursday, Saban said the players committed NCAA violations by making poor decisions. He did not elaborate.

Away from the spotlight Thursday at the Orange Bowl media day —Hurts spoke as he stood off to the side, while some players like fellow Tide quarterback Tua Tagovailoa spoke while seated on makeshift stages— he shed no light on his future, other than saying he's focused on Alabama's CFP semifinal game Saturday against Oklahoma.

Hurts says "my story's still unfolding. Just have to see what's up next."

There are surely some out there who think Hurts should transfer. Rap legend Snoop Dogg is not among them, as noted in an Instagram video earlier this month where he offered a shout-out to Hurts for sticking it out with the Tide and playing a big role in the SEC championship game.

Hurts stepped in when Tagovailoa got hurt in the SEC title game to lead Alabama's comeback win. He has completed 50 of 67 passes this season. He says he's appreciative of support from fans, and that he's done his best to block out people's assumptions about his future.

Goodyear has extended its title sponsorship of the Cotton Bowl for three more years through the 2021 season.

The extension was announced Thursday.

No. 2 Clemson and No. 3 Notre Dame play Saturday in a College Football Playoff semifinal at AT&T Stadium. The Cotton Bowl will then be a CFP semifinal game again in 2021.

Also Thursday, life-sized sculptures of the team's mascots made out of tires were unveiled at the stadium. More than 500 hours were needed to form 375 Goodyear tires into replicas of Notre Dame's Leprechaun and a Clemson Tigers mascot.

Clemson defensive tackle Dexter Lawrence says he has no idea what may have led to his failed NCAA test for performance-enhancing drugs and still holds out hope that he will be able to play for the Tigers against Notre Dame in the Cotton Bowl.

The 6-foot-4, 350-pound Lawrence says he would never even think about purposely taking something like that.

"I'm not the type of guy to do a selfish act like that, I have too much pride," Lawrence said Thursday during Cotton Bowl media day. "I love this team and my family too much to even think about putting a substance like that in my body. I don't know where it came from, I don't know how it got there."

Clemson coach Dabo Swinney announced Monday the school had been notified by the NCAA about the failed tests by Lawrence, reserve offensive tackle Zach Giella and freshman tight end Braden Galloway. Swinney said the players were found to have trace amounts of a substance called ostarine, which can act like an anabolic steroid.

Swinney says the Tigers were waiting for results Thursday from additional testing done by the NCAA that might clear the players for Saturday's playoff semifinal game.

Lawrence says he's "at peace," adding, "I know that I have no control on what the 'B' sample result will be. I'm just here to support my teammates and just try to be the leader and starter I've been all year."

The most closely guarded secret around the Alabama Crimson Tide this season has nothing to do with personnel, injuries, depth charts or playcalling.

Alabama and Oklahoma had media day Thursday for the Orange Bowl Thuin Miami Gardens, Florida, while Clemson and Notre Dame held court for the Cotton Bowl in Arlington, Texas. But one of the burning questions this season for the Crimson Tide has been about burgers.

Every Thursday night this season, Tide offensive coordinator Mike Locksley —who'll be taking over as head coach at Maryland when Alabama's run in the College Football Playoff ends— had offensive players over to his Tuscaloosa home to watch whatever college game was on television and to eat some burgers off his grill.

The crowd of players grew as the season went along, given the quality of Locksley's recipe.

So the question was posed to Locksley, who responds with: "Can't tell you that. It's the dry rub. They all want the recipe for that, but I won't give it to them."

Preparation for the College Football Playoff is almost finished, but before No. 1 Alabama faces No. 4 Oklahoma and No. 2 Clemson meets No. 3 Notre Dame media day will be held at the bowl sites Thursday.

There are questions to be answered heading into Saturday's games.

Heisman Trophy winner Kyler Murray was under the weather and did not attend Wednesday's Oklahoma media availability for the Orange Bowl in Fort Lauderdale, Florida. The quarterback did practice, but will he show up for media day?

Clemson is waiting to hear back from the NCAA on three players who are in danger of being suspended for failing a performance-enhancing drug test. Star defensive tackle Dexter Lawrence is one of the players who the Tigers are preparing to be without in the Cotton Bowl.