The Latest: St. John's scraps 2 games, MSG back in play 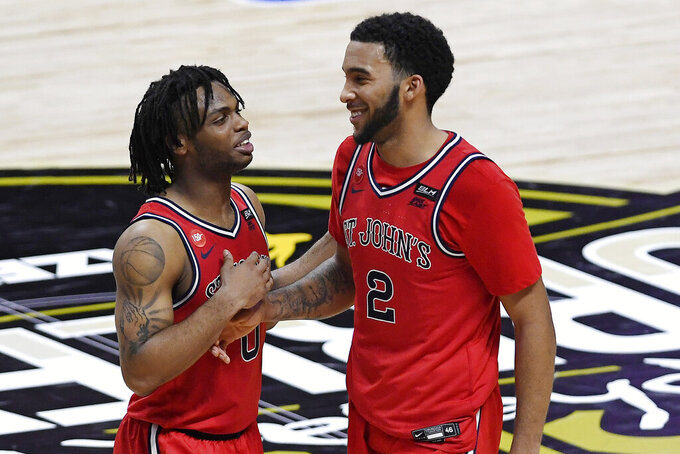 St. John’s has canceled men’s basketball games scheduled for Sunday against Sacred Heart and next Tuesday versus Fordham because of positive COVID-19 tests in both those programs.

Instead, the Red Storm (3-0) will now host Stony Brook on Sunday afternoon at Carnesecca Arena on campus. Fans are not permitted to attend games there through at least the end of December.

The school said Tuesday it was “still in the process of filling the vacancy on its schedule caused by the Fordham cancellation.”

St. John’s was supposed to play at No. 17 Texas Tech on Thursday night in the Big East-Big 12 Battle but scrapped the trip due to coronavirus concerns. Instead, the Red Storm will face BYU (3-1) on Wednesday in “Bubbleville” at Mohegan Sun Arena in Connecticut as part of the Roman Legends Classic.

College basketball is coming back to Madison Square Garden this month.

In a matchup between the past two NCAA champions, Villanova and Virginia are scheduled to square off Dec. 19 in the heart of New York City, the arena announced Tuesday.

Because of the coronavirus pandemic, no fans will be allowed to attend the Holiday Hoops Classic — the first college game at The Garden since the Big East Tournament was stopped at halftime of a March 12 quarterfinal between St. John’s and Creighton.

MSG normally hosts a string of early season events featuring top programs from around the country, but all the restrictions and uncertainty created by COVID-19 this year has left many teams scrambling for available opponents and venues as they schedule on the fly.

Virginia and Villanova plan to meet in midtown Manhattan six days before Christmas, keeping a date with each other that had been booked for the Big Apple long ago.

West Virginia says no fans will be allowed at its men’s and women’s basketball games in December, except for essential personnel and the families of players and staff, due to recent spikes of COVID-19 cases in the state.

The university initially had capped fan attendance at 20% of capacity at 14,000-seat WVU Coliseum, or around 2,800.

“To say that we are disappointed is quite an understatement, but the decision not to allow spectators in December is the correct one at this time for the safety of our fans, staff and student-athletes,” athletic director Shane Lyons said.

Ensor says the conference plans to conduct its rescheduled men’s and women’s cross-country championships in March. Administrators are looking at an April date for swimming and diving.

No. 17 Texas Tech has replaced a men’s basketball game that was canceled because of COVID-19 concerns.

The Red Raiders (2-1) will now play Troy at home in a non-conference game Friday night.

That is a night after the Red Raiders had been scheduled to play at home against St. John’s, but the Red Storm pulled out of that game earlier this week.

The Denver Nuggets informed season ticket holders on Tuesday that no fans will be allowed into Ball Arena when it opens later this month because of the COVID-19 pandemic.

In an email sent to season ticket holders, the Nuggets said the team along with Kroenke Sports and Entertainment “will continue to work closely with state and local authorities to navigate the safest return to hosting fans in Ball Arena.”

The news comes amid an ongoing broadcast impasse between Altitude and Comcast that prevents most fans in Denver from watching games at home.

No. 19 Richmond’s men’s basketball is pausing all activities and its game at College of Charleston on Wednesday night has been called off due to COVID-19 concerns within the Spiders program.

Charleston said Tuesday it will look to reschedule with Richmond or find another opponent to make up the lost game.

Charleston said in a release that coronavirus testing and contact tracing issues for Richmond led to the decision.

Richmond was coming off an upset of then-10th-ranked Kentucky this past Sunday and entered the national rankings Monday.

Michigan’s football team did not meet in person for a second straight day after coach Jim Harbaugh said there had been an increased number of presumptive positive COVID-19 tests.

Michigan (2-4) is scheduled to host Maryland (2-2) on Saturday. The Terrapins are coming off their first game since a coronavirus outbreak within the program led to two games being canceled.

Stanford’s football team is heading for a long trip to the Pacific Northwest because of new COVID-19 protocols in Santa Clara County.

The new rules prohibit practices and games for contact sports for three weeks. The Cardinal are traveling to Seattle on Wednesday to begin preparing for Saturday’s game at Washington.

They will then spend the following week in Corvallis, Oregon, before playing Oregon State on Dec 12. That game had originally been scheduled to be played at Stanford but has been moved because of the new rules.

Ohio State said in a one-sentence statement that the team would “resume organized team activities” on Tuesday afternoon.

The Buckeyes will do so while managing COVID-19 issues, and will be without coach Ryan Day, who tested positive last week. Defensive line coach Larry Johnson is assuming head coaching duties for the week and for Saturday’s game in East Lansing.

Ohio State chose to cancel its game at Illinois last week because of an unacceptable number of COVID cases among players and staff in the program.

No. 3 Ohio State (4-0, CFP No. 4) needs to play this week and next week against Michigan to have enough games in to be eligible for the Big Ten title.

Kentucky starting safety and Southeastern Conference interceptions leader Kelvin Joseph has become the first Wildcat to opt out and will focus on preparing for the NFL draft.

The redshirt sophomore, whose four pickoffs also rank fourth nationally, announced his decision Monday night on social media. Joseph thanked Kentucky coaches, teammates and the community for the opportunity as well as LSU, where he had 12 tackles and a pass breakup in 2018 before transferring and sitting out last season per NCAA transfer rules.

The North Baton Rouge, Louisiana, native added, “I know it was a short stay, but it’s BIG BLUE NATION ALL DAY!”

Joseph also had 25 tackles, a tackle for loss and a pass breakup in nine games. His announcement ironically comes hours after Kentucky coach Mark Stoops noted his team being one of the few to not have players opt out. (

Elon says its men’s basketball team has paused activities due to a positive COVID-19 test within its program.

The program announced the decision Tuesday. It said the case was within its Tier 1 personnel group, which includes athletes, coaches and support staff.

Team members and within that group have begun a quarantine period of at least 14 days. That means scheduled games against Mercer, No. 6 Duke, Howard and No. 14 North Carolina have been postponed.

Elon says it has conducted additional testing after receiving the positive result.

Vanderbilt women’s basketball has canceled its home game Wednesday night against Texas Tech because of COVID-19 issues within the Commodores’ program.

The Commodores announced the cancellation Tuesday, a day after the men’s basketball team withdrew from a pair of games in Connecticut and paused its activities due to a positive test within its program.

The women’s basketball team now has had its first three games of the season canceled. Vanderbilt’s next game is Saturday at Little Rock and remains on the schedule.

The University of Colorado has ordered its men’s basketball program to pause activities for COVID-19 reasons and the Pac-12 has postponed the Buffaloes’ conference opener at Arizona that was set for Wednesday.

The Pac-12 said it would work with both schools to find a mutually agreeable makeup date.

Athletic director Rick George said the status of other upcoming games is dependent on contact tracing and subsequent testing of players and basketball staff this week.

The last time the Buffaloes’ regular season was interrupted was in December 2006 when back-to-back home games were canceled because of a snowstorm.

Oklahoma plans to open its men’s basketball season on Thursday against Texas-San Antonio after a week-long delay.

Oklahoma was scheduled to play the Roadrunners last Wednesday, but the Sooners paused team activities after a spike in COVID-19 cases.

Oklahoma’s game against Central Florida scheduled for last Saturday was postponed, and Oklahoma and Florida mutually agreed to cancel their game scheduled for this Wednesday.

Iowa State will allow about 15,000 fans at Jack Trice Stadium for the Cyclones’ football game against West Virginia on Saturday.

Athletic director Jamie Pollard also announced about 1,400 fans will be allowed at Hilton Coliseum on Sunday for a women’s basketball game against No. 1 South Carolina and a men’s game against DePaul.

Pollard said the decision was made after a discussion with university leaders following reviews of state and local COVID-19 positivity trends and hospitalization rates.

Only families and guests of athletes and staff could attend the Nov. 21 football game against Kansas State and the first three basketball games at Hilton.

Prairie View A&M has canceled men's basketball games against UNC Greensboro and Western Kentucky at the Wade Houston Tipoff Classic in Louisville because of COVID-19-related issues.

The Panthers were scheduled to play UNCG Tuesday night and WKU on Thursday in the multi-team event. UNCG will instead play Winthrop on Tuesday. WKU stated in a release that it is working to arrange a replacement game.

The cancellations reduce the Tipoff Classic schedule from 16 to 14 games. Duquesne and Little Rock are also participating with host Louisville in the event that ends Friday.

A college basketball game between Colorado and Arizona scheduled for Wednesday has been postponed due to COVID-19 issues within the Buffaloes’ program.

The Pac-12 said Colorado does not have the minimum number of scholarship players available due to positive coronavirus tests and contact tracing protocols.

The conference will work with both programs to reschedule the game.