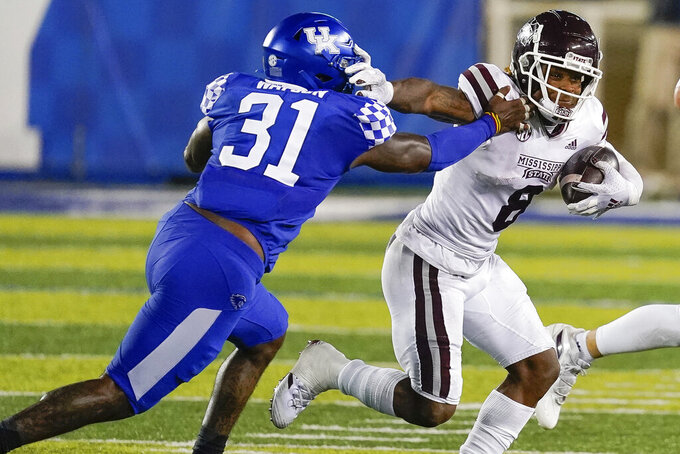 STARKVILLE, Miss. (AP) — Mississippi State coach Mike Leach said that receiver Tyrell Shavers and defensive ends Tre Lawson and Jamari Stewart are no longer with the program that he has also heard that senior back Kylin Hill plans to opt out for the rest of the season to prepare for the NFL draft.

Hill has caught 23 passes for 237 yards and a touchdown in the coach’s pass-oriented Air Raid scheme but did not play in a 28-14 home loss to then-No. 11 Texas A&M nearly two weeks ago. Leach has repeatedly said that Hill was unavailable because of personal reasons.

Asked again about Hill during the call, the first-year coach said, “I haven’t talked to Kylin, but what I’ve heard is he is opting out, preparing for the NFL.”

Hill tied a school single-game mark with 15 receptions in a loss at Kentucky on Oct. 10 and had a career-best 158 yards and a touchdown on eight catches in a season-opening 44-34 win at defending national champion LSU.

Hill returned to school after hinting at entering the NFL draft but this spring threatened to boycott the season unless the Mississippi state flag, which included a Confederate emblem, was changed. State legislators retired the polarizing flag after mounting public pressure.

The Bulldogs (1-3) are preparing for Saturday night's game at No. 2 Alabama (5-0) without Shavers, a graduate transfer from Alabama who had caught nine passes for 107 yards and a TD and started one of four games. Lawson had played in three games while Stewart, a freshman, had not seen action.

Leach wished the players the best and said he expected roster turnover as part of the transition.

“You just take it as it comes, really, whether guys are looking for a better opportunity or guys abide by the rules," he said. "We're only concerned with the guys in the program that we're coaching.”