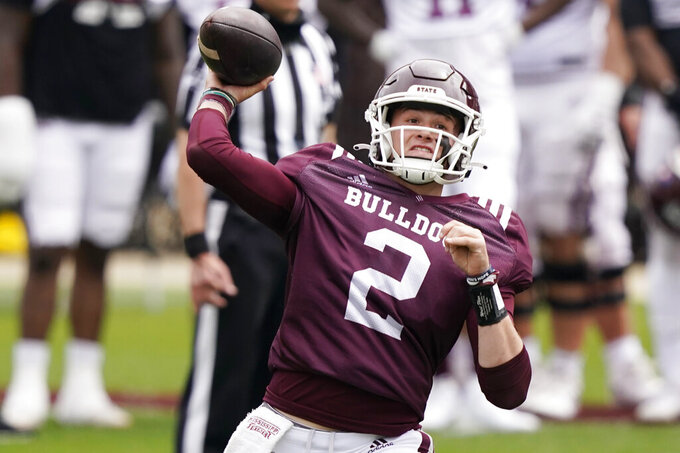 Mike Leach welcomes the opportunity to instill his football philosophy on a normal time frame.

That’s not saying the outspoken Mississippi State coach didn’t have an impact in his first season with the Bulldogs. Leach’s high-octane Air Raid offense yielded immediate dividends with an opening-game upset of defending national champion LSU on the way to establishing 21 school passing and receiving records. Not bad considering MSU endured a quarterback shuffle — as if coronavirus-related protocols that altered practice schedules and familiarization between the coach and his players weren’t challenging enough.

The transition included some drama with player exits, leaving the Bulldogs young at many positions. Their inexperience created plenty of growing pains in a 4-7 season — MSU’s lowest win total since 2008 — though they closed with consecutive victories including a wild 28-26 victory over Tulsa in the Armed Forces Bowl.

With workout schedules closer to normal, Leach’s goal in Year 2 is building on the positives through all that tumult.

“In our case, it was difficult because of a new staff and a very young team,” Leach said of the transition during last month’s Southeastern Conference media days. “Perhaps even more disruptive. And that’s the key, to just kind of do the same things over and over again and just do them better and better each time.

“That’s kind of what a routine gives you.”

MSU’s challenge is turning that continuity into a 12th consecutive bowl appearance the old-fashioned way — with a winning record.

The Bulldogs return 15 starters, including eight from offense that averaged 296.3 yards passing per game to rank 20th nationally. While those gaudy numbers could be expected from the pass-happy coach, they managed just 21.4 points per game and were shut out by eventual national champion Alabama and Kentucky (scoring only on a safety).

That leaves MSU plenty of room for improvement with its ground game. The upside is that many of those youngsters quickly matured with playing time, making the Bulldogs eager to improve.

“Momentum is huge,” senior wide receiver Austin Williams said. “I love finishing with a win, two wins in a row, just kind of see our offense and defense rolling and playing more of a complete game.

“I thought it was a big step for us.”

Some other things to watch in Leach’s second year at Mississippi State:

MSU’s hopes to create different offensive look depend on improving a ground game that averaged a SEC-worst 36 yards per contest in 2020. That drastic falloff followed the early-season departure of 1,000-yard rusher Kylin Hill, who was a key passing option early on. Sophomore Jo’quavious Marks (312 yards, three TDs) eventually led the team last season and seeks more carries in addition to being a passing option out of the backfield.

Though the Bulldogs allowed more yards per game (263.4) through the air than the previous season, they moved up from near the bottom to the middle among SEC teams. Most importantly, they return much of their secondary including sophomore cornerback Emmanuel Forbes, who returned three of his five interceptions for touchdowns to lead FBS. Senior linebacker Tyrus Wheat also returns after recording five of their 25 sacks.