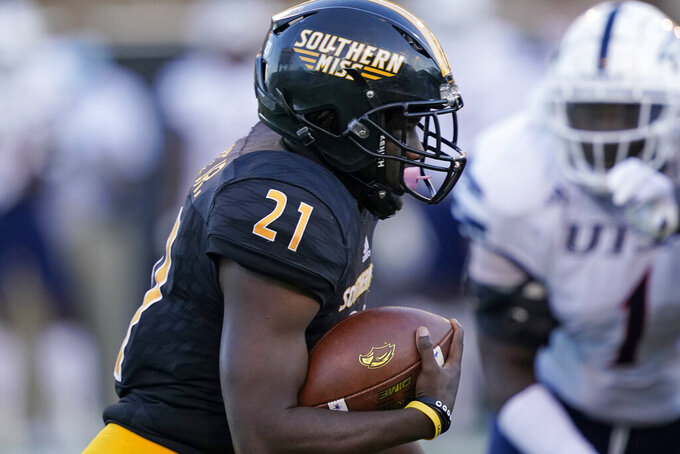 Southern Mississippi running back Frank Gore Jr. (21) carries the ball for a first down against UTSA during the second half of an NCAA college football game, Saturday, Nov. 21, 2020, in Hattiesburg, Miss. UTSA won 23-20. (AP Photo/Rogelio V. Solis) 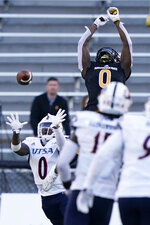 HATTIESBURG, Miss. (AP) — Sincere McCormick ran for 173 yards and two touchdowns to lead UTSA to a 23-20 victory over Southern Mississippi on Saturday.

Tate Whatley threw a 51-yard touchdown pass to Frank Gore Jr. for Southern Miss that capped the scoring with 10 minutes to play. The Golden Eagles had one more possession, but couldn't cross midfield after 11 plays and four minutes remaining.

Trailing 10-9 after halftime, McCormick broke loose on a 69-yard touchdown run and scored from the 1 that gave the Roadrunners a 23-10 lead with 6:30 left in the third quarter.

McCormick entered second in the nation in yards rushing and set the program's single-season rushing record at 1,044 yards with a game remaining. He surpassed Jarveon Williams’ 1,042 mark set in 2015-16. It was McCormick's eighth career 100-yard rushing game, matching Williams' record.

UTSA's Zakhari Franklin caught a 6-yard touchdown pass from Frank Harris in the second quarter. Franklin, a sophomore, finished with 22 yards receiving and has over 1,000 yards for the season.

Whatley was 22-of-39 passing for 220 yards with two touchdowns. Gore finished with 70 yards rushing to go along with his scoring catch.