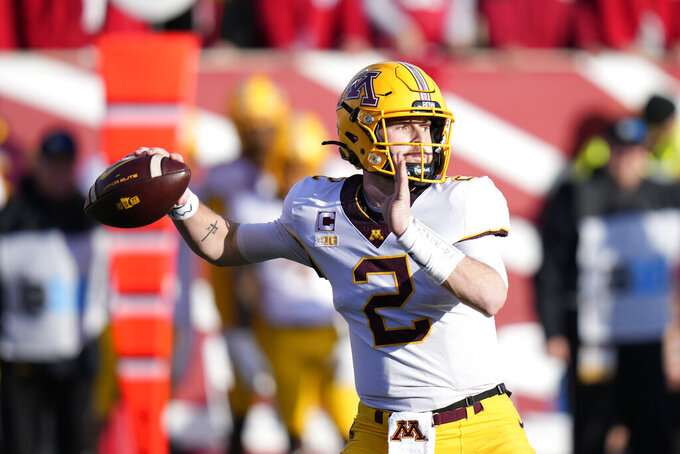 Line: Minnesota by 5, according to FanDuel Sportsbook

West Virginia RB Tony Mathis vs. Minnesota's run defense. The Gophers are fourth nationally in total defense and ninth against the run, holding teams to 100 yards per game. Mathis became the Mountaineers' featured runner after leading rusher Leddie Brown opted out of the bowl to prepare for the NFL draft. Mathis saw limited action behind Brown, rushing for 356 yards on 59 carries.

West Virginia: QB Jarret Doege. With the Mountaineers figuring to struggle against Minnesota's run D, Doege will likely have to have a big day for them to have a chance. The senior was 24th nationally with 21.2 completions per game, throwing for 2,908 yards and 19 touchdowns with 11 interceptions.

Minnesota: RBs Ky Thomas and Mar’Keise Irving. The Gophers have been hit hard by injuries at running back, losing leading rusher Mohamed Ibrahim after he was injured in the opener and Trey Potts on Oct. 3. Thomas and Irving have been steady in their place, combining for 1,250 yards and nine TDs.

The game will be played at Chase Field, home of baseball's Arizona Diamondbacks. ... West Virginia opened the season 2-4, but became bowl eligible by winning four of its final six games. ... Minnesota is 0-3 all-time in the Guaranteed Rate Bowl, previously named the Insight Bowl before changing sponsors. ... The Mountaineers are 11th nationally in red-zone defense, holding teams to a 73.3% conversion rate. ... Minnesota QB Tanner Morgan is 26-12 as a starter, breaking the school record for wins of 24 set by Mitch Leidner. ... West Virginia senior LB Josh Chandler-Semedo is 30th nationally with 8.7 tackles per game. ... Minnesota WR Chris Autman-Bell led the team with 35 receptions and 490 yards receiving despite missing the first two games of the season.