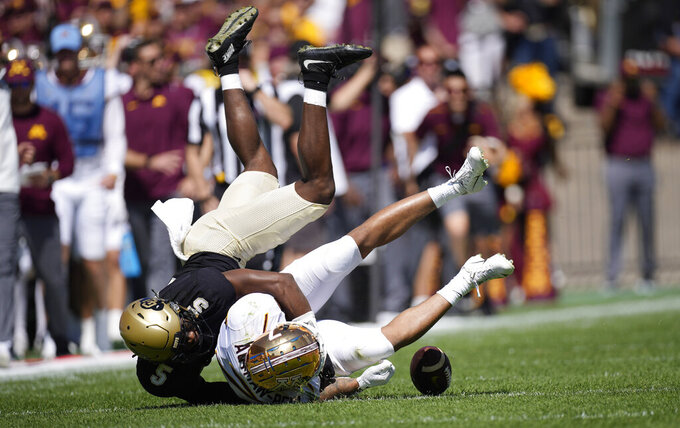 The Minnesota defensive lineman was one of several Gophers players and team personnel who came to the rescue when a fence gave way along the Minnesota sideline as the team celebrated following the game. The advertising signs helped brace the short fall — the Gophers mascot was knocked to the ground — and police quickly arrived to assist. No injuries were reported.

An eventful day from start to finish for the Gophers.

“We were all on the same page,” Rush said.

This marked the first time Colorado (1-2) has been shut out at Folsom Field since Nov. 3, 2012, against Stanford. The last nonconference team to shut out Colorado in Boulder was LSU on Sept. 15, 1979.

In addition, it was the first shutout of a Power Five team on the road by Minnesota since Nov. 12, 1977, at Illinois.

“We came in here with incredible focus,” Minnesota coach P.J. Fleck explained. “What our defense did was a wonderful performance.”

Wearing shiny gold helmets, the Gophers defense certainly sparkled. They sacked Colorado QB Brendon Lewis four times and held the Buffaloes offense to no passing plays of more than 15 yards or any runs longer than 10. Colorado had just 7 total yards in the first half and couldn't get anything going in the second half, either. The Buffaloes finished with minus-19 yards on the ground.

Minnesota also forced two turnovers — one on a fumble from Lewis and another when Dimitri Stanley muffed a punt.

The Gophers (2-1) made it a memorable afternoon for Fleck, who was coaching in his 100th career game. He’s now 58-42 overall, including 28-20 in five seasons with Minnesota.

Potts had TD runs of 13, 2 and 3 yards on his way to a 121-yard performance. It was another strong showing since taking over for injured tailback Mohamed Ibrahim, who was using a scooter to move around the sideline with his lower left leg in a green cast. Potts had 178 yards and two scores last weekend.

“We played lights out,” Potts said.

About the only hiccup was the kicking game, where senior Matthew Trickett missed 24- and 46-yard field goals along with an extra point. Trickett connected on a 33-yarder in the fourth quarter to make it 23-0.

Minnesota’s 21 straight nonconference win streak is the longest active one in the nation. The Gophers haven’t lost a game out of conference since Sept. 3, 2015, against TCU. The streak includes 17 regular-season victories and four bowl wins.

The Buffaloes never found an offense that worked for Lewis, who was under constant pressure. He finished 8 of 16 for 55 yards before giving way to freshman Drew Carter in the fourth quarter. There was a scary play late in the fourth when Carter was shoved out of bounds and toppled over a barrier. He quickly returned to the game.

“That was a complete, I would say, beatdown in every way,” Colorado coach Karl Dorrell said. "We’re not the flashiest thing in town right now, and I get that, and we’re going to continue to work and get ourselves better and to get our fan base to be excited again. ... That wasn’t good enough.”

The last time these two teams met was in 1992, when the Buffaloes had an anemic first half on offense before pulling out a 21-20 win in Minneapolis.

“You've just got to look yourself in the mirror as a man, see you got out-physicalled,” Colorado defensive end Carson Wells said. "Come back tomorrow with a better mindset.”

Pac-12 commissioner George Kliavkoff paid a visit to Boulder as part of his listening tour. He’s now been to 10 of the 12 campuses, with Arizona State and Washington on deck.

Minnesota: The Gophers entered the game 0-3 against Colorado, which was their second-most games played without a victory over a current FBS team. The No. 1 spot is 0-4-1 versus Notre Dame.

Colorado: In two games, the Buffaloes have now scored just seven points. Changes may be on the way, whether it's a new QB or new play-caller. “It is one of those points in the season, given that performance, that we really had to reevaluate everything,” Dorrell said.

Colorado: At Arizona State next Saturday to open Pac-12 play.