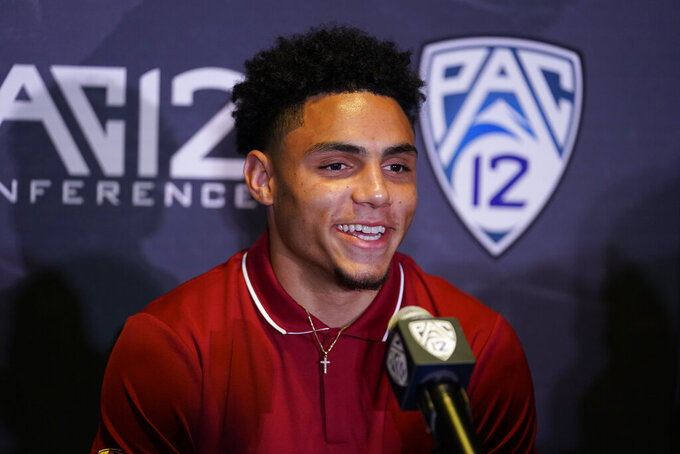 Oregon coach Mario Cristobal knows his Ducks enter the new season bearing the burden of outside expectations. However, he focuses on the goals he has set instead of what others are saying.

While the 11th-ranked Ducks are predicted to win their third straight Pac-12 championship, he still wants his players to have the mindset that they're the hunters, not the hunted.

“I never and we will never see ourselves as a program with a bullseye on us, a target on us. It’s never been that way, never will be that way,” Cristobal said. “When we wake up in the morning, our feet hit the ground, we wake up with a hunger, drive, determination to make sure we’re always a hunter in a humble way, driven way. All the other stuff, the fluff and the predictions, it doesn’t factor into our regimen, our structure, our DNA, our mentality.”

Oregon is stacked at most positions and has two of the conference's top defensive players in defensive end Kayvon Thibodeaux and linebacker Noah Sewell, but quarterback remains a question. Anthony Brown, who started 28 games at Boston College, transferred to Oregon last year but sat behind starter Tyler Shough until he played in the Pac-12 championship game and the Fiesta Bowl.

Shough has transferred to Texas Tech, meaning Brown could be the third different Ducks signal-caller to deliver a championship. Justin Herbert led the Ducks to a Rose Bowl victory in 2019.

Oregon could help the Pac-12's chances of getting into the College Football Playoff for the first time since 2016 with an upset of No. 4 Ohio State on Sept. 11 in Columbus. The Pac-12 has four other teams ranked in the preseason AP Top 25 — No. 15 Southern California, No. 20 Washington, No. 24 Utah and No. 25 Arizona State — but needs to have stronger showings in its marquee nonconference games.

USC athletic director Mike Bohn gave a vote of confidence to Clay Helton last week, but if Helton is to see a seventh full season leading the program, he at least needs to get the Trojans back to the conference title game.

The Trojans are stacked at the skill positions, including quarterback Kedon Slovis and wide receiver Drake London. They also have a favorable schedule that includes a road game at No. 9 Notre Dame but doesn't include Oregon or Washington.

“Our job right now is to get back to that championship game and to win that game because we know when we win that game, it opens the doors to the playoff and the national championship opportunities,” Helton said.

Arizona State returns all 11 defensive starters and nine on offense, including quarterback Jayden Daniels. Normally that type of talent would make the Sun Devils the preseason pick for the South Division, but they are under an NCAA investigation for illegal recruiting practices and have three assistant coaches on paid leave.

WILL THE SOUTH RISE?

Since the Pac-12 expanded and went to two divisions in 2011, the North Division has won all but one conference title and was home to the only two teams from the league that have gone to the College Football Playoff. Even though Oregon is predicted to three-peat and continue the North's dominance, the South has four of the conference's top six teams.

Besides USC and Arizona State, Utah and UCLA could factor in the conference race as both return a majority of their starters.

Thibodeaux: The junior was the only unanimous selection to the preseason All-Conference team as well as being the conference's lone first-team representative on The Associated Press preseason All-America team.

London: The junior figures to be Slovis' top target after the departure of Amon-Ra St. Brown. London led the Trojans in receiving yards with 502 last season and has eight touchdowns in his two years as a starter.

Utah LB Devin Lloyd: The senior has led the team in tackles the past two seasons. His 10 solo tackles for loss last season were second in the conference.

UCLA QB Dorian Thompson-Robinson: The senior has started 28 games the past three years. He has improved each season and became the first Bruins QB to throw for over 300 yards and run for over 100 in the same game during last year's opener at Colorado.

Colorado RB Jarek Broussard: The sophomore rushed for 895 yards in six games and was the conference's Offensive Player of the Year last season.