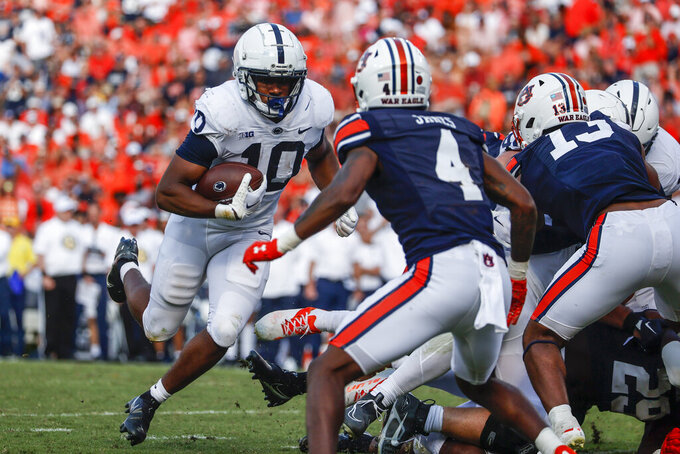 Penn State running back Nicholas Singleton (10) carries the ball in for a touchdown against Auburn during the second half of an NCAA college football game, Saturday, Sept. 17, 2022, in Auburn, Ala. (AP Photo/Butch Dill)

STATE COLLEGE, Pa. (AP) — There’s nothing special about Nick Singleton’s touchdown celebrations. How Penn State’s true freshman running back gets there is something different.

Through three games, Singleton has been the flashiest player on the field. Behind an offensive line that is playing more physical each week, the speedy Singleton has broken tackles and outrun defenders to give the No. 14 Nittany Lions (3-0, 1-0 Big Ten) the big-play potential in the running game they’re striving for this season. They host Central Michigan on Saturday.

“You’ve got to be balanced,” quarterback Sean Clifford said. “That was the goal in the offseason. The o-line, the running backs, they set their minds to it and said ‘We’re going to change. We’re going to run the ball.‘”

No Penn State back had run for 100 yards in the 17 games before Singleton torched Ohio for 179 yards on just 10 carries in Week 2. He turned 10 more touches against Auburn into 124 yards and scored twice.

Singleton’s most impressive play came in the fourth quarter when he zipped through a wide open hole, skittered around a second-level block, then slipped the rest of the Tigers to cap a 54-yard touchdown. As he crossed the goal line, Singleton slowed to a gentile walk, barely leapt off the ground to chest-bump a teammate and lightly tossed the ball to an official.

Nothing flashy, save for a flex or two as he jogged back to the bench.

It’s why, even though he leads the country with four rushes of 40 yards or more, Singleton’s teammates tell him he has “no swag.”

Those are good traits for dealing with the hype that’s building around him. Singleton was the Gatorade National Player of the Year last season and is already being compared to other Nittany Lion greats.

His 334 rushing yards through three games are more than Saquon Barkley's best season start of 307. Larry Johnson ran for 362 yards in 2002, the most for any Nittany Lion in any three-game span, but did it with 24 more carries than Singleton.

That’s because Penn State has another freshman back, Kaytron Allen, used by offensive coordinator Mike Yurcich. Allen has added 106 yards on 23 carries and played the most at Auburn, where he scored twice.

By the time Singleton had his big scoring run, the Tigers had been adequately softened. Penn State linemen notched five pancake blocks in the first half, one each from right tackle Caedan Wallace, right guard Sal Wormley and center Juice Scruggs, who flipped Auburn’s Jayson Jones onto his back in the red zone on Penn State’s second scoring drive.

Left guard Landon Tengwall had two punishing finishes, including one on Penn State’s first possession where he bulldozed Auburn’s Marquis Burks, leaving the defensive tackle rolling on his back and his helmet rolling across the field.

“We’re always trying to put guys on the ground,” lineman Bryce Effner said. “I think with these younger guys that we have coming in. We want these young guys coming in to have a great running game and be able to explode off the ball and run eighty yards down the field and score touchdowns — which is awesome for us to experience it, too.”