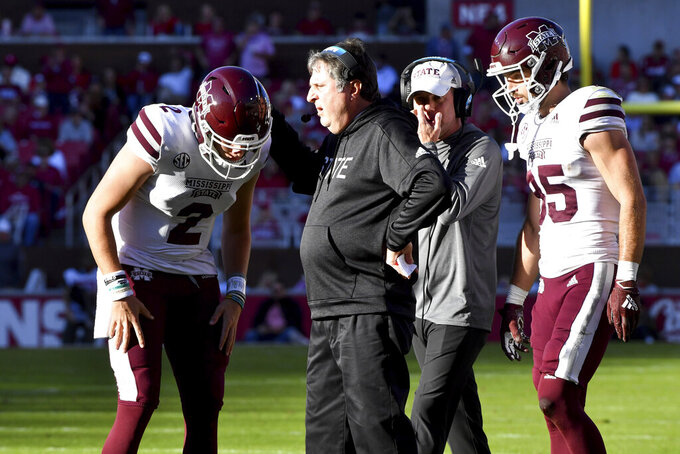 Mississippi State coach Mike Leach, second from left, talks with Will Rogers (2) and Austin Williams (85) during a timeout during the first half of an NCAA college football game against Arkansas, Saturday, Nov. 6, 2021, in Fayetteville, Ark. (AP Photo/Michael Woods)

The Auburn Tigers are trying to find their way back to the end zone while Mississippi State just wants to make its field goals when needed.

The 16th-ranked Tigers (6-3, 3-2 Southeastern Conference, No. 17 CFP) and Bulldogs meet Saturday at Jordan-Hare Stadium after suffering losses thanks partly to their failures in those endeavors.

Mississippi State (5-4, 3-2) is coming off a 31-28 loss at Arkansas and trying again to become bowl eligible. In the last one, Nolan McCord’s potential game-tying field goal attempt from 40 yards in the final seconds sailed wide for the team's third miss.

Beating a third ranked team would be a nice way to secure that sixth win.

“We just have got to keep getting better,” Leach said. “The worst of it is there’s several in our grasp that are a play away. One play away and we win the game. We can’t lose sight of that.”

Auburn hasn't scored a touchdown in six quarters, including a 20-3 loss at No. 11 Texas A&M. Quarterback Bo Nix was sacked four times and the offense never got going.

“That’s not going to get it done. We know that,” Tigers coach Bryan Harsin said. “We knew that going into the game. We’ve known that the entire season and we have to be good enough to correct that at the end of the day and that’s the challenge."

The challenge for Auburn's defense, meanwhile, changes dramatically. Texas A&M ran for 217 yards, while Will Rogers and the Bulldogs monopolize the ball with a steady diet of passes.

It shouldn’t take long for Rogers to break a school record he’s largely responsible for. The Bulldogs need six completions to break last year’s mark of 373, 263 by Rogers after taking over for KJ Costello. The SEC passing leader has 363 of their 368 completions this season for 3,307 yards and 23 touchdowns and is hitting at a whopping 75% rate in the Air Raid system.

Leach drew lots of attention by calling for an open tryout for kickers after costly misses by both McCord and Brandon Ruiz against Arkansas. He was hardly backing down from his comments or worrying much about his kickers' psyches, and expressed it in a very Leach-like way.

“The thing is that there is a ball, and you kick it,” Leach said. “It really doesn’t matter if a bunch of 7-year-olds are watching or five million Mongol warriors on horses getting ready to shoot their bows and arrows at you. You approach the ball, and you kick it. It’s as simple as that. But I do want to have that depth.”

Auburn can unleash more of a pass rush with less concern about the run than last week. The Tigers sacked Rogers six times last season. Derick Hall, Eku Leota and Colby Wooden all have four sacks for Auburn.

“He’s a really good guy, a really good quarterback, completes a lot of passes and can move around a little bit,” Hall said of Rogers. "But I think we can be a little more relentless in our pass rush this week, so just being able to work that this week, knowing the opportunity that we have.

"I think we know this Saturday we’ll have more opportunities to get sacks. And just to put that on display to be more relentless in our pass rush.”

Rogers is seeking his eighth-straight 300-yard passing game. He has thrown for 18 touchdowns in that span.

Auburn’s Jarquez Hunter and Tank Bigsby are the No. 2 running back tandems in the SEC with a combined 1,279 yards, behind Texas A&M’s Isaiah Spiller and Devon Achane.