No. 16 UTSA visits UTEP after snub from playoff committee 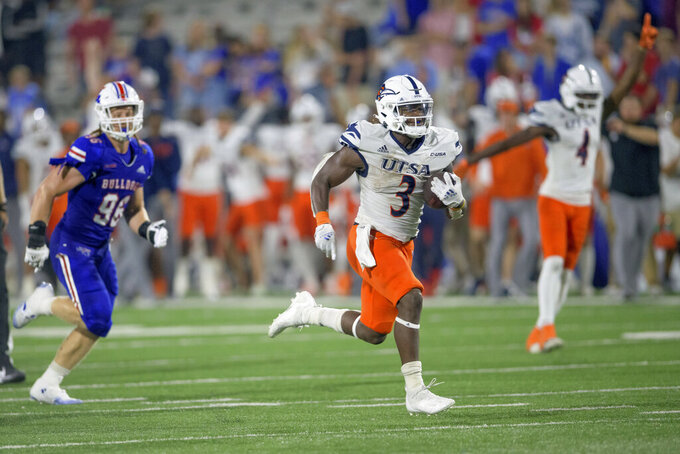 UTSA running back Sincere McCormick (3) heads to end zone to score a touchdown in the second half of an NCAA college football game against Louisiana Tech in Ruston, La., Saturday, Oct. 23, 2021. (AP Photo/Matthew Hinton)

Line: UTSA by 12 1/2, according to FanDuel Sportsbook.

UTSA gets its first chance to prove something to the College Football Playoff selection committee after not being among the 25 teams in the debut of the rankings this week. It's the second game since the school's first-ever appearance in the Top 25, and first since coach Jeff Traylor signed a 10-year extension that averages $2.8 million per season. UTEP is trying to bounce back after a four-game winning streak ended with a 28-25 loss at Florida Atlantic.

UTSA: QB Frank Harris, like McCormick a product of the San Antonio area, has his record up to 16-6 while leading the best start in school history. The dual threat lefty, who overcame multiple injuries early in his career, has thrown 16 touchdown passes with three interceptions this season. The offense averages 257 yards passing and 184 rushing and is 11th nationally in scoring at 39.4 points per game.

UTEP: WR Jacob Cowing has five 100-yard games, four of them coming in the first five games of the season. The other was a 166-yard showing two games ago against Louisiana Tech. It's the most 100-yard games for a UTEP receiver since Kris Adams had five in 2010. The last Miner with six 100-yard games in a season was Johnnie Lee Higgins Jr. in 2006.

The Miners have won six consecutive games at the Sun Bowl, where the Roadrunners are 4-0 in series history. ... The Miners are playing a ranked opponent in El Paso for the first time since a 24-7 loss to No. 4 Oklahoma in the 2012 opener. Their last victory over a ranked team at home was in 2009, 58-41 over 12th-ranked Houston. ... The Roadrunners have three interception returns for touchdowns the past two games. ... UTEP is sixth nationally in total defense and held six opponents to less than 300 yards, the most since holding eight teams under that mark in 1966.