No. 17 A&M looks to keep rolling in SEC at Mississippi State 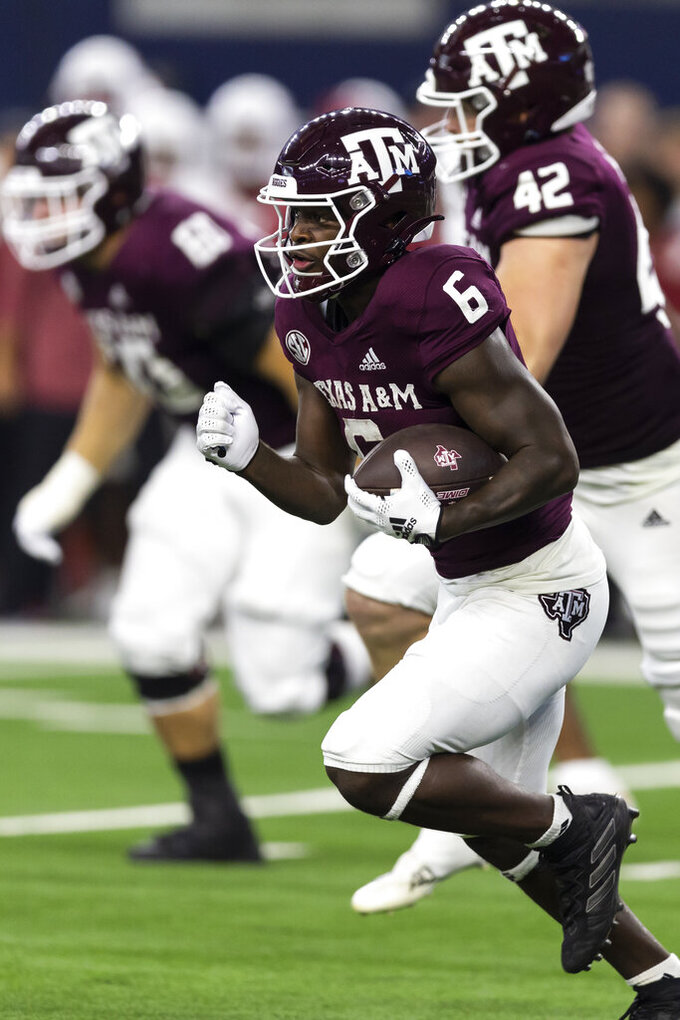 Texas A&M running back Devon Achane (6) carries the ball during the first half of the team's NCAA college football game against Arkansas on Saturday, Sept. 24, 2022, in Arlington, Texas. (AP Photo/Brandon Wade)

Line: Mississippi State by 3 1/2, according to FanDuel.com Sportsbook.

Texas A&M seeks a 2-0 start to conference play, while Mississippi State looks to even its league record with a second consecutive win over the Aggies.

Mississippi State quarterback Will Rogers vs. Texas A&M’s secondary. Rogers is coming off his second career six-touchdown game and leads the SEC in passing yards (346.5 per game) and 16 touchdowns. He passed for 408 yards and three TDs last year in College Station but faces the third-ranked SEC pass defense, which is yielding just 153.3 yards per game. Aggies defensive back Antonio Johnson has been the most active, ranking second in the SEC with 38 tackles. Though A&M ranks in the lower half in sacks and interceptions, its 5.2 yards allowed per passing attempt is tied for the SEC lead.

Texas A&M: Junior running Devon Achane ran for a TD against Arkansas and has been an all-purpose scorer rushing, receiving and returning for the Aggies. He has scored a TD in every contest, and his four-game TD streak is the Aggies’ longest since Trayveon Williams scored in the final five games of the 2018 season. He’s also a kick return threat, ranking second nationally with 39.60 yards.

Mississippi State: Bulldogs receiver Caleb Ducking has multiple receiving touchdowns in two games this fall. His 21 receptions lead MSU and are tied for fourth in the SEC, while his team-best 258 yards receiving rank 10th. Ducking’s five TDs rank second in the SEC and seventh in FBS.

Texas A&M will play without leading receiver Ainias Smith, who sustained a season-ending lower body injury against Arkansas. ... The Aggies have top-15 wins over Miami (Fla.) and Arkansas since losing to Appalachian State. ... A&M is playing its first true road game and visits Alabama and South Carolina over the next three weeks. ... Sophomore defensive back Tyreek Chappell has four pass breakups, ranking fourth in the league. ... Bulldogs receiver Lideatrick Griffin ranks fifth in FBS kick returns with 33.5 yards. ... RB Jo’quavious Marks and WR Jaden Walley have receiving streaks of 27 and 26 games, respectively. ... MSU is tied for 32nd nationally in FBS defense (319.2 yards per game), four spots higher than Texas A&M (330.0).